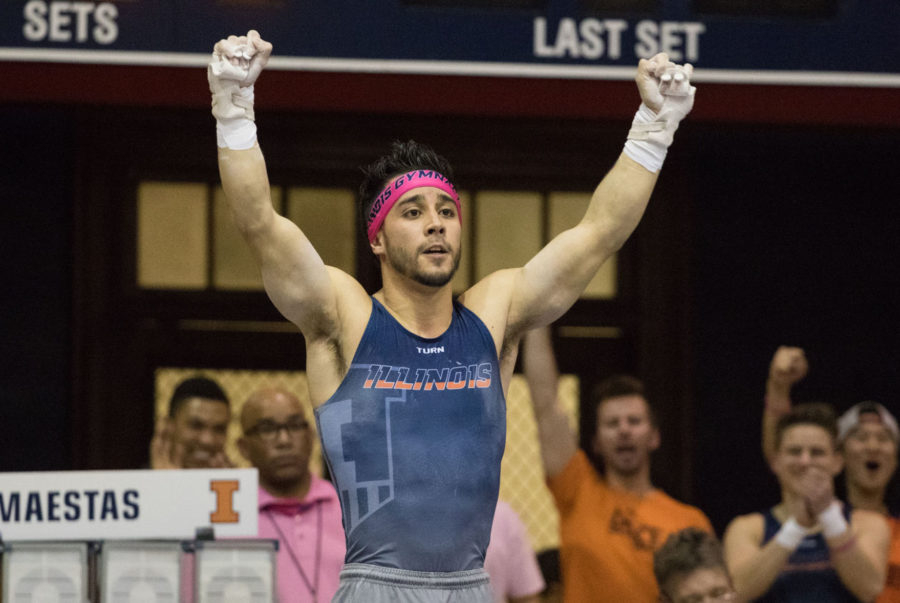 Illinois’ C.J. Maestas sticks his landing during the rings event at the gymnastics match vs. Minnesota at Huff Hall on Saturday. Illinois won 435.200-419.800.

The Illinois men’s gymnastics team has gotten off to an 8-0 start, but head coach Justin Spring is not completely satisfied with his team’s performance.

Since the start of the season, Illinois has struggled in the final events of dual meets. But the cause isn’t clear to Spring.

“It’s not like there’s been pressure. We’ve been up by almost 10 points every match,” Spring said of his team competing its final events. “Maybe it’s lack of pressure and less attention to details because they feel we have this in the bag, and then they let a few things slide.”

Regardless, Spring has been setting up team simulation events and has switched up the way his team goes about its routines in order to mentally prepare the team for Saturday’s home meet against Iowa.

“We’ve been setting a team score that we need to hit, changing the direction that we face on the bars and anything that takes us out of our element so we’re more prepared for the pressure of competition,” said senior Jordan Valdez.

This weekend against Iowa will be the Gym Jam, where the men’s team will compete simultaneously with the women’s team. Typically, this event draws more fans than the average meet.

Junior C.J. Maestas said the team can’t get too worked up in front of the home crowd if they are looking to finish on a strong note.

“They’ve been a surprise team,” Spring said of Iowa. “They’ve went from trying to blow out huge routines and making costly mistakes, to really streamlining their process and focusing on consistency.”

After being a late lineup scratch last meet, Spring said junior Fred Hartville is ready to make his season debut. Hartville has been sidelined due to a minor knee sprain.

The events that he will most likely compete in are the floor exercise and vault. Hartville, who was the 2013 vault national champion, will add even more power to a vault lineup that recorded the fourth-best score in team history on Saturday against Minnesota.