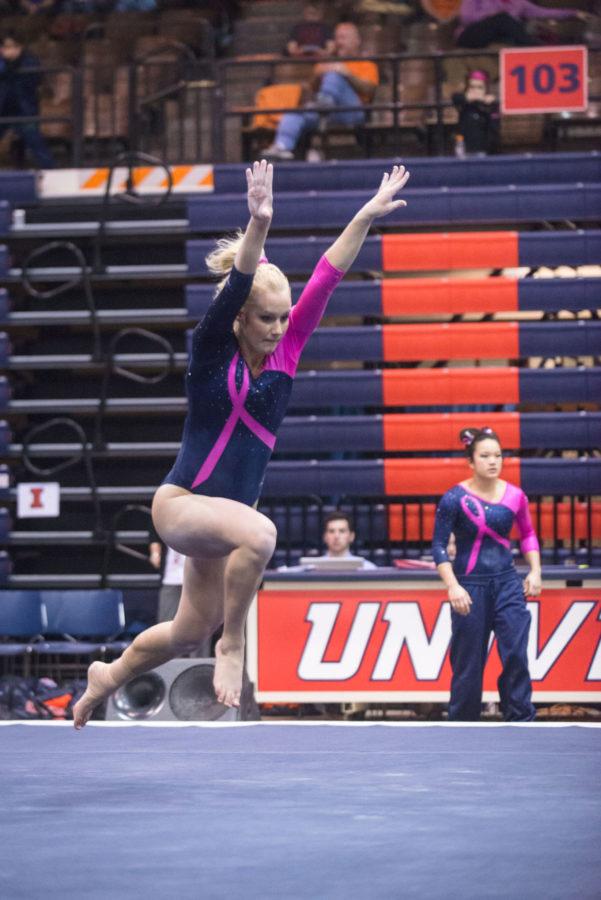 Illinois' Jordan Naleway performs a routine on the floor during the match against Penn State at Huff Hall on Saturday, February 1, 2015.

The Illinois women’s gymnastics team is coming off its best meet of the season thus far, but the gymnasts are still focused on improving for Saturday’s home meet against Minnesota.

Despite scoring a season-high in last weekend’s win at Huff Hall, the Illini still made mistakes, so they aren’t satisfied.

“I think that this team can go so far,” junior Heather Foley said. “We just need to get the little things.”

But the little things could have made the difference for Illinois last season against Minnesota.

In their last dual meet, the Illini fell short against the Golden Gophers after a less-than-ideal finish on balance beam, so fixing small details is exactly what they’ve worked on heading into the weekend.

Sticking more dismounts is just one goal for the gymnasts. Foley said the team has a stick chart in its locker room, and adding more stickers to that is something she would like her team to do after this weekend. Head coach Kim Landrus and senior Jordan Naleway also agreed that racking up more sticks is something Illinois needs to do.

“We’ve had a little bit higher numbers with that in previous meets,” Naleway said of the sticks from last weekend. “So we want to build that back up.”

Beyond that, though, the Illini have worked on their showmanship for balance beam and floor.

Landrus mentioned the gymnasts’ scores are “very performance-based,” so that extra work with showmanship can give them the tenths necessary for a win.

Heading into the meet, Minnesota sits at No. 25, making its way back in the rankings after dropping out after the first week of the season. Both Illinois and Minnesota have scored above a 196 twice this season, but the Golden Gophers’ highest score of a 196.875 is higher than any score the Illini have posted this year. Naleway has higher aspirations for her team, though.

“I really want to get after that 197,” she said. “We were capable of it last year, and we have all the talent on this team to do it.”

It has been Illinois’ consistency that has given it a No. 14 ranking. Minnesota, however, has achieved recent success to get its No. 25 ranking by scoring two 196’s after three straight meets of 194’s. The Illini know their concern must stay with themselves, though, because that’s all they can control.

“We can’t play defense in gymnastics, so we just need to go in there and worry about ourselves,” Landrus said. “We need to make sure we stay very focused and take it one routine at a time.”