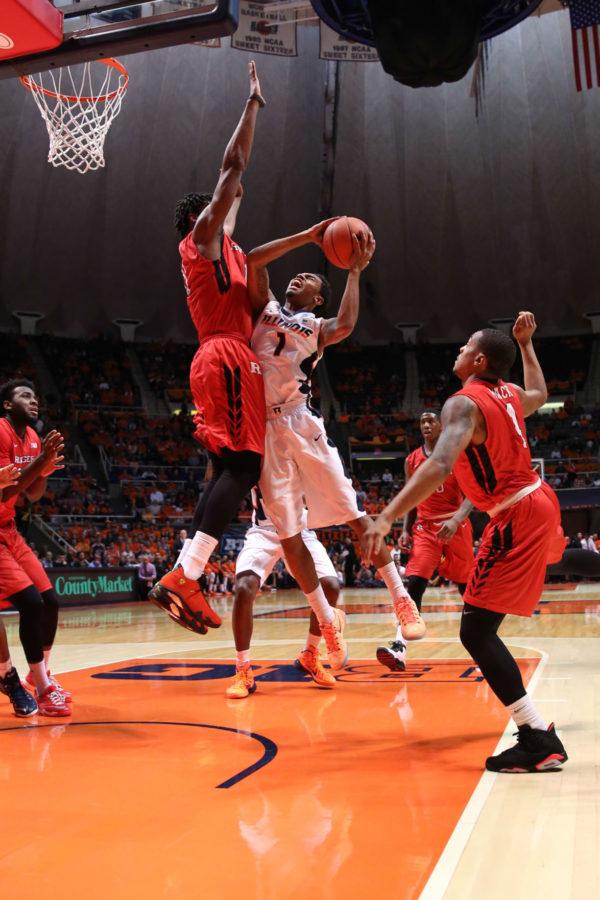 Illinois’ Jaylon Tate goes up for a shot during the game against Rutgers at State Farm Center on Tuesday. Tate led the team with six assists.

Jaylon Tate can dish it out.

The Illini point guard has proven his ability to pass the ball all season, leading the Illini with 82 assists.

“Jaylon sees the floor very well and is a great passer,” Starks said of Tate, who just recently began starting games for the Illini.

Starks, who had 13 points against Rutgers, was a recipient of Tate’s helping hand throughout the game, while playing at shooting guard.

“He has a great vocal presence about him,” Groce said. “He’s really growing with the leadership.”

Egwu remains unheralded even without stats

While assists can often go unnoticed in the shadow of high point scorers and rebounders, uncredited defensive plays also slide under the radar when it comes to giving credit where credit is deserved.

Illinois senior center Nnanna Egwu is catching flack with just 11 points in the last three games while turning the ball over six times, adding fuel to the hashtag #NnannaHands on Twitter which is used to bash the center when he loses control of the ball.

But Groce said the senior has impacted games in areas that don’t show up on stat sheets, such as setting screens and being vocal on the floor.

Groce added that Egwu was active on the floor during his 30 minutes against Rutgers.

“Nnanna was great defensively,” Groce said. Egwu broke the program’s career blocks record against Purdue with his 178th career block in the first half.

And Groce isn’t the only Big Ten coach to notice Egwu’s subtle impact under the basket. Penn State head coach Pat Chambers said Egwu is bigger and stronger than he was the year before.

“I don’t think (Egwu) gets enough credit,” Chambers said after Saturday’s 60-58 loss to the Illini. “He’s the mother hen. He doesn’t get the credit he deserves.”

Illinois will need Egwu’s impact down the stretch, to try to win the majority of the remaining eight games on the regular season schedule.

The Illini will play four of those games on the road, including visits to No. 5 Wisconsin, Michigan State, and Iowa.

Illinois’ also looking to even out a 1-5 road record this season, while building on its 11-1 home record in remaining State Farm Center matchups with Michigan State, Northwestern, Michigan and Nebraska — having lost to both the Wolverines and the Cornhuskers already this season.

But the Illini remain confident, despite a season of injuries and the indefinite suspensions of guards Rayvonte Rice and Aaron Cosby.

“We have a lot in the tank,” sophomore guard Kendrick Nunn promised the media following a 21-point performance Tuesday night.

What seemed unlikely in the absence of leading scorer Rayvonte Rice is now proving to be true: Illinois’ offense can jump the hurdles placed in front of it this season if the team continues to play like it has in the last two games.