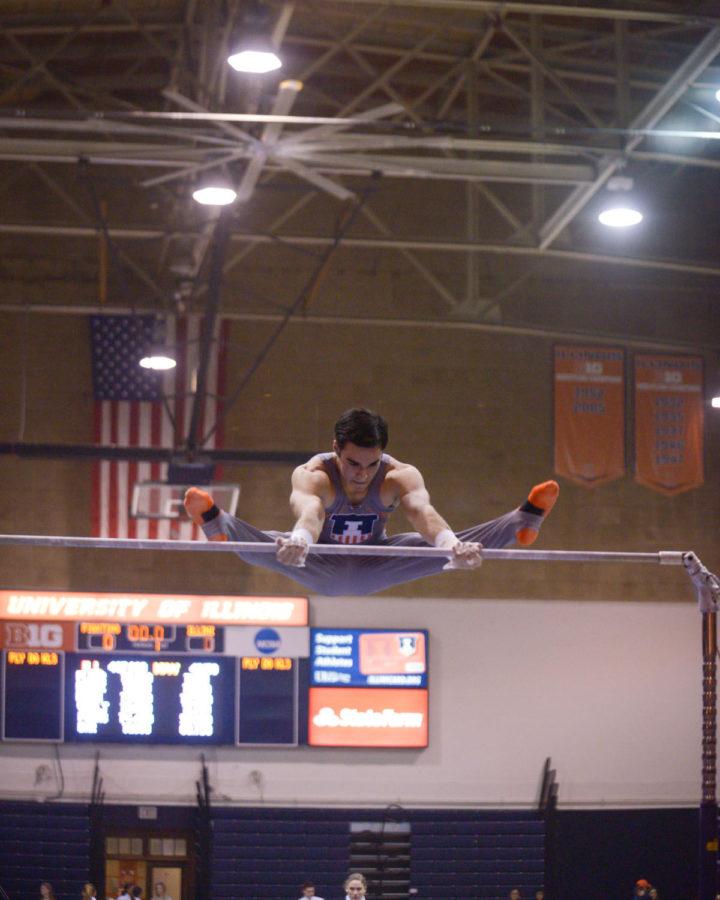 Illinois’ Jordan Valdez performs a routine on the high bar against Iowa at Huff Hall on Saturday. The Illini won 440.150-424.500.

When senior Jordan Valdez flipped off the high bar and stuck his landing in the last event of the Illinois men’s gymnastics meet against Iowa on Saturday, he not only recorded a career-high score of 15.600, but he also cemented the highest team score in history as well.

The Illini were not immediately aware of this feat when they celebrated their 440.150-424.500 win with their teammates. In fact, due to a late change in Matt Foster’s floor exercise score from 14.850 to a career-high 15.050, the gymnasts were not aware of its achievement until after they exited the gym. However, while celebrating at Huff Hall, the Illini realized that they capped off a strong meet.

Recording a score in the 440 range is something head coach Justin Spring said his team has had the potential of accomplishing since the start of the season.

Until the victory over Iowa, one of the Illini’s few flaws this season has been ending their meets with strong scores all the way through the lineup.

“I have no idea why, but they finished as best as I ever could have hoped,” Spring said Saturday. “But the message is going to be to look at this not as something special, but business as usual.”

The meet started out with Illinois setting a season-high team score on the floor (73.100). That score is also tied for fifth-best in school history.

The shakiest moments of the meet for the Illini came during their vault routines. While they had a few hiccups in the event, Spring will not hold it against his team.

“It’s easy to look back at that event and say, ‘I’m so disappointed,’ but I’m not,” Spring said. “It’s been a very consistent event for us this year and we just had some things that were off by the littlest bit that resulted in some big mistakes.”

“People weren’t scared, they were going for it,” Maestas said. “That’s the first time we were going for those kind of sticks on high bar. We weren’t taking hops. People were cringing their toes on that mat to stay on it.”

Junior Fred Hartville made his season debut for Illinois after being sidelined with a knee injury. The 2013 vault national champion competed in both the floor and vault events and scored a 14.150 and 14.650, respectively.

“He was a big contributor and he’s only going to get better,” Spring said of Hartville.