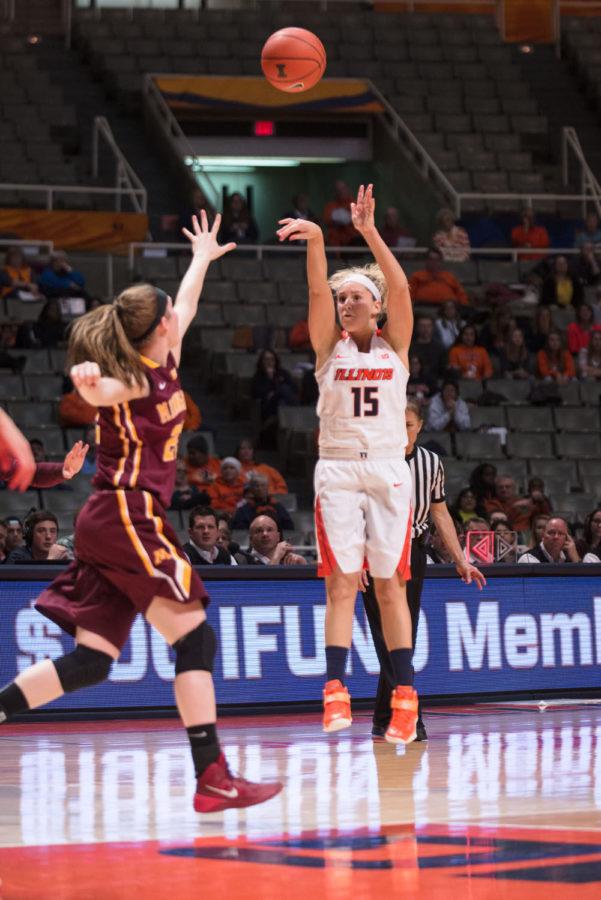 Illinois’ Kyley Simmons goes for a three-pointer against Minnesota at the State Farm Center on Thursday, Feb. 5.The Illini struggle on offense despite strong shooting from the arc.

In a battle between the state’s two Big Ten teams, Illinois women’s basketball came up short for the second time in just over two weeks against Northwestern. The Illini fell to the Wildcats 64-58 in Evanston, Ill., on Sunday.

The Illini (12-12, 3-9 Big Ten) made the first half a competitive affair — they only trailed by four at halftime. But the Wildcat’s fast start to the second half put Illinois at a 15-point disadvantage. Slow starts to halves have been an issue for a good portion of Illinois’ season, and that sluggishness showed up again Sunday.

“The start of the second half really put us in a tough spot,” head coach Matt Bollant said. “It felt like we had some momentum at the end of the first half, but we just didn’t start with getting stops and then gave up some offensive rebounds.”

After beating Minnesota on Thursday to end a seven-game losing streak, Illinois has now dropped eight of its last nine games. The first loss to Northwestern, a 68-67 thriller on Jan. 22, finished similar to Sunday’s matchup. Illinois had chances to regain the lead late in the second half of both games, but came up short. After a 3-pointer by Kyley Simmons brought the Illini within two, Simmons fouled out on a debatable charge call.

“I didn’t think it was a charge on Kyley. I thought the kid was sliding over,” Bollant said. “But give Northwestern credit. The refs were calling charges pretty tight.”

Bollant’s squad struggled mightily from the field, only connecting on 35.6 percent of its shots. However, the Illini hung around thanks to their 3-point shooting, hitting nine triples, five of which came from Simmons. Center Chatrice White, who had an efficient 14 points in the first matchup with Northwestern, continued a slow offensive stretch, only posting eight points on 3-of-10 shooting.

Illinois has had reoccurring issues in many of its losses this season, some of which showed up again in Evanston. The Illini lost both the rebounding and turnover battles, areas they’ve focused on improving for much of the season. They also faced foul trouble once again, something that has been a hindrance to an already thin roster. However, Bollant once again seemed proud with the second-half push to get back into the game.

“We started clawing and fighting,” Bollant said. “Down 15, we showed some resiliency, came all the way back and then just couldn’t quite get over the top.”

Not being able to get over the top has seemed to be the theme in many of the Illinois losses this season. While Bollant and the players haven’t put their fingers on a specific cause over the past few weeks, Bollant thought it started on the offensive end in their most recent defeat.

“Sometimes it’s taken some time to make some baskets for us before we get going,” Bollant said. “You can’t do that as a basketball player, you can’t wait until you make shots to do the other things as well.”