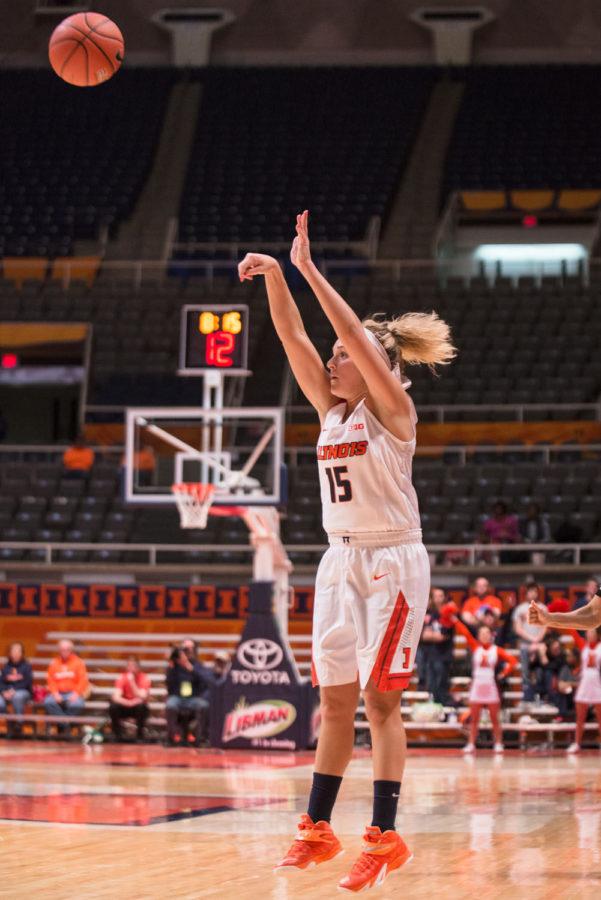 Illinois’ Kyley Simmons attempts to sink a three-pointer during the match against Minnesota at the State Farm Center on Thursday.  The Illini won 95-69.

It’s no secret that the Illinois women’s basketball team has shooters all over the floor. Even Illinois’ two best post players, freshman center Chatrice White and sophomore forward Jacqui Grant, have each attempted at least 55 3-pointers on the season.

Head coach Matt Bollant is well aware of Illinois’ shooting depth and has challenged junior guard Kyley Simmons to lead the other shooters by example.

“Sometimes as a point guard, it’s hard because you’re trying to get everyone else involved and you forget that she’s our best 3-point shooter,” Bollant said. “She makes big shots every game.”

Bollant said he challenged Simmons to take 10 shots against Minnesota last week and she responded by draining a career-high six 3-pointers against the Gophers. In her last three games, Simmons has shot a scorching 60 percent from long-range, and her 15 made 3-pointers in that span are more than a quarter of her entire output from beyond the arc this season.

Simmons’ recent fearless shooting sets an example for some of Illinois’ younger shooters who have yet to find their groove on offense. For Simmons, hitting open shots just comes down to trust.

Illinois’ loss to Northwestern on Sunday was senior guard Ivory Crawford’s third game back from a knee injury that sidelined her for almost three weeks. Despite a near triple-double performance in Illinois’ win over Minnesota, Crawford may still be shaking off some rust.

In her three games since returning, Crawford is shooting just 39 percent from the field and has fouled out twice. Crawford said she keeps her mind clear of the injury and hasn’t used it as an excuse for her slight struggles.

“I‘m not worried about the injury at all,” Crawford said. “The moment you think about it, bad things happen. Just getting better — that’s my mindset right now.”

Bollant said Crawford is close to being 100 percent and the coaching staff is challenging her to be a more consistent leader for a relatively inconsistent team.

“I think she’s getting closer,” Bollant said. “The conditioning is a part of it, and her confidence is growing. We’re just trying to challenge her to be more consistent as our leader who shows up every day and plays as close to 40 minutes as you can.”

It’s pretty clear by now that freshman center Chatrice White is having a successful first season for the Illini. She has three Big Ten Freshman Player of the Week honors under her belt and is fifth in the Big Ten in blocks per game, while scoring nearly 15 points per game. Since her emotional return home to play Nebraska, though, White has gone through a rough stretch.

Over the Illini’s past three games, White is averaging barely over nine points per game on 33 percent shooting from the field. She was held to just two rebounds in 21 minutes before fouling out against Wisconsin. She fouled out again when Illinois hosted Minnesota and picked up four fouls at Northwestern.

Because of the heightened frontcourt competition White has seen of late, Bollant doesn’t seem too concerned with his prized recruit’s recent play and wants to create more looks for her in the paint.

Since Indiana has just two players as tall as 6-foot-2, Wednesday’s game against the Hoosiers may be White’s best chance to avoid foul trouble and get back on track.