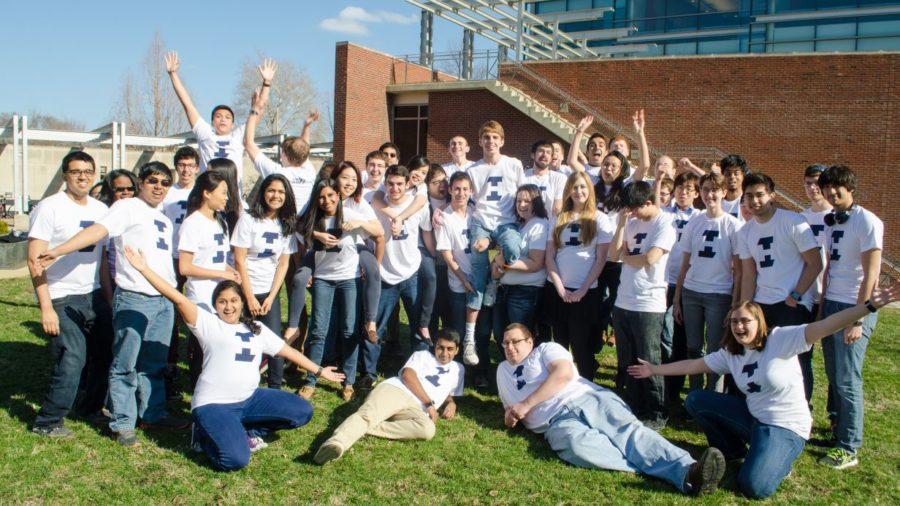 Members of Illini Hackers, an organization officially formed in fall 2014, pose outside the Thomas M. Siebel Center for Computer Science.

With a Pandora station pumping music through the hall’s speakers, students pulled out takeout containers, laptops — one even had a desktop monitor — and plenty of soda for fuel until midnight. The third Hack Night of the school year was underway, and the Illini Hackers were getting to work.

On Jan. 18, the Illini Hackers — a loosely formed group at the University with the goal to “foster a community of technologists, builders and hackers” — were named the winners of the Major League Hacking fall 2014 North America season.

“It’s not hacking in the sense that you’re hacking into systems; you’re hacking together a project,” said Nick Kortendick, sophomore in Engineering. “It’s not a business plan or anything like that. It’s literally just making a project of anything … fun little projects that people otherwise wouldn’t have time to work on.”

From the 36 Major League Hacking events, or hackathons, throughout the United States, Canada and Mexico, the Illini Hackers racked up a total of 381 points, which is 26 more than the second place University of Maryland, College Park team. The score is a combination of both participation points for the number of students who attended and merit points for winning hacks and placing at each event.

The recognition comes just as members of Illini Hackers are gaining speed themselves. While University students have been attending hackathons across the country since the events started, it wasn’t until last fall that Illini Hackers was formed as the umbrella group to organize the school’s hacking community and host informal Hack Nights throughout the year.

“It recognized all of the efforts we’ve put into advocating for these events and encouraging people to attend — it’s all paying off,” said Nathan Handler, senior in Engineering. “It also doesn’t hurt for things like encouraging people to come here and see what our own hackathon has in store.”

Major League Hacking is planning to host an official award ceremony for Illini Hackers sometime in February, Handler said, which coincides with the start of the University’s second annual hackathon, HackIllinois.

Both Handler and Kortendick are serving as co-directors for this year’s HackIllinois, running from Feb. 27 to March 1. The 36-hour event will overflow Siebel Center with more than 800 students from all over the country and recruiters from leading companies such as Microsoft, Interactive Intelligence, Yelp and Dropbox. With a long list of sponsors eliminating any fees for participants, the event is meant to allow students to easily collaborate, network and hack together in a creative space.

“From talking to (recruiters and sponsors), a lot of them view a hackathon like this, where they can see the students working and actually creating real code, as a much more valuable recruiting opportunity and branding opportunity than your traditional career fair where all you really get is a resume and a brief two-second talk with the student,” Handler explained.

However, the upcoming HackIllinois will feature other new additions. The weekend event will start with a welcome ceremony in the Illini Union’s ballrooms but will most notably end with a conclusive expo in which participants can present what they’ve worked on, according to Kortendick.

“That’s going to be open to the whole community to attend to get greater visibility for HackIllinois, for the projects that the participants are working on and the sponsors,” Handler said.

Projects can range from creating new apps and websites to hardware and more. And while some projects do go on to become startups and gain venture capital, Kortendick said, the focus of the event is to foster an increased emphasis on projects outside of coursework in a creative and collaborative atmosphere.

While the Major League Hacking award is a great recognition for the Illini Hackers, it is also a validation to one of the country’s leading hacker communities already hard at work.

Sarah can be reached at [email protected]