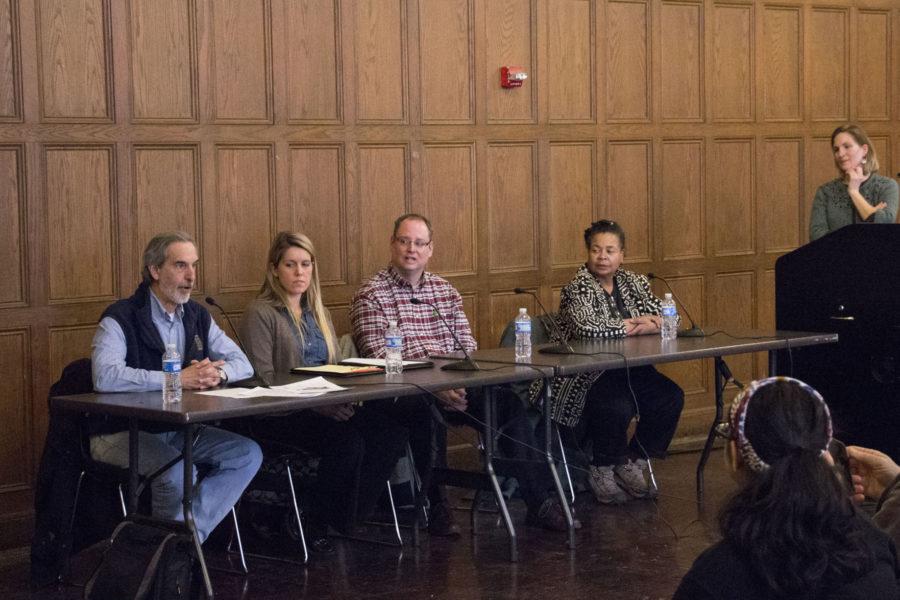 The University YMCA is not a typical YMCA. Its rooms are lacking pools and workout facilities; instead, voices advocating for change are its continual guests, inviting community members to join in a discussion around central issues, both locally and globally.

Every Friday at noon, the University YMCA hosts its “Friday Forum” lecture series, which fosters insightful conversations, conducted by experts within different fields. The series kicked off on Jan. 30 and will continue until March 13, with this semester’s theme being food justice.

“Friday Forums are a venue to have ongoing important conversations about big topics that always include aspects of social change, which has a lot to do with the mission of the Y,” said Ann Rasmus, associate director at the Y.

Friday’s lecture will focus on how politics can determine the way people help with the food movement.

“One of the things the Y has done historically is serve as a place for important dialogue,” she said. “And so the Friday Forums program came out of that sense.”

Friday Forums began in 1927, and for decades it has been an ongoing program at the YMCA. Each semester, the series is organized for a certain theme that the Y staff members believe people on campus should be aware about.

The Friday Forum lecture series has featured speakers such as Barack Obama, Angela Davis and other prominent leaders throughout history. Today, it continues to thrive as new voices lead the conversations centered around different avenues of social justice.

“When it first started, Friday Forum really was one of the few places where lecturers and people coming from off campus, as well as people from on campus, came to speak,” said Mike Doyle, executive director of the Y. “It has had a very significant impact, and it lasting this long speaks to the fact that it’s addressing a valuable need.”

Doyle has been working at the YMCA for six years and said he believes each lecture is beneficial, no matter who the speaker is.

“Even some of the lesser-known speakers blow me away,” Doyle said.

For the lecture series to maintain its success within the Y, a different staff member is given the responsibility to choose a theme and facilitate the program each semester.

“The themes always relate to the missions of the Y, those being social justice, environmental work, faith in action and cross-cultural understanding,” Rasmus said.

With it being Rasmus’ turn to organize the Friday Forum series, she decided to dedicate the spring’s series to food justice. She said she believes it is a topic that is seen and experienced worldwide.

“With food being a basic right that is truly unequally shared among people, there is a lot of conversation happening locally as well as globally,” Rasmus said.

Both Andrea Rundell, executive director of the YWCA of the University, and Michael Gillespie, assistant professor of sociology at Eastern Illinois University, will speak about how political views affect the food distribution systems that are set up on a local and federal level at Friday’s Food Forum.

Rundell said she believes solutions to hunger are directly correlated with perceptions of what it means to be poor.

“What we consider to be the causes of poverty is what is going to affect how we decide to come up with solutions for it. This is going to make a big difference if you are setting up something like a food pantry,” Rundell said.

Rundell said she hopes that others will realize this political effect and gain a new outlook on food justice.

“I think hunger still is a pressing issue that we face in the United States and in the world,” she said. “Hopefully our lecture will give people a bigger perspective on the food distribution system in the United States, from the federal level to the local level.”

Mariya Yanovskaya, freshman in LAS and attendee of the Feb. 6 lecture, also found herself wanting to join the food justice discussion.

“I wanted to see how figures within this community have found ways to make an impact through their accomplishments and agricultural work,” she said.

After attending the lecture, Yanovskaya said she believes she has gained more insight on how to contribute to food sustainability through the enthusiasm of the speakers.

“I enjoyed how passionate they were about the work they were doing and how they knew that the community could get involved with them,” she explained.

For generations, Friday Forum has offered the community a deeper understanding of humanitarian issues, and students are invited to join this ongoing tradition at the Y.

“One of the things that is in our DNA as an organization is that we are not your typical Y where there is a gym and a pool, but we are really about developing student leaders,” Doyle said. “We do this by engaging students in issues within the community and the world.”

Robin can be reached at [email protected].