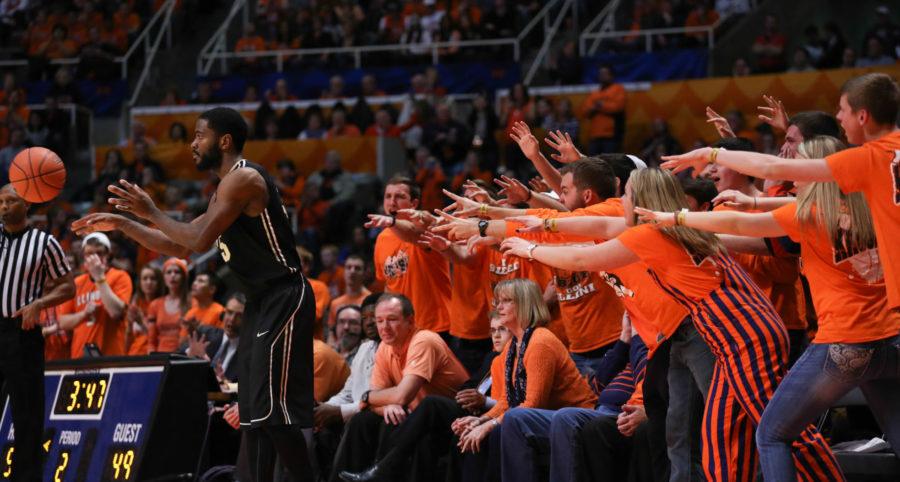 Members of the Orange Krush attempt to distract Rapheal Davis while he inbounds the ball during the game against Purdue at State Farm Center on Jan. 21. The Illini won 66-57.

Illinois basketball’s loss to Michigan was the most heartbreaking of the season. It’s one the Illini are looking to avenge, and there might not be a better time to do it.

The team dropped the last meeting between the two in Ann Arbor, Mich., losing in overtime 73-65. Michigan came back from a 13-point deficit in the second half to grab the overtime win.

Illinois (16-8, 6-5 Big Ten) has won three-straight games for the first time since a trio of nonconference wins in late December. The Wolverines (13-11, 6-6) are experiencing the opposite, having lost four of their last five games. The teams will meet for the second time on Thursday night in an “Orange Out” at State Farm Center.

Since the loss to Michigan, the Illini have gone 6-4 in conference play, trading wins and losses up until its recent three-game winning streak — all while dealing with injuries and suspensions to guards Rayvonte Rice and Aaron Cosby.

On Wednesday, head coach John Groce said both Illini guards are still “suspended indefinitely” for violation of team rules. The two have been healthy scratches from the Illinois lineup since Jan. 31.

Rice was the team’s leading scorer and rebounder before breaking his hand in practice in early January, while Cosby started 13 games for Illinois before suffering a retinal tear in his left eye against Indiana on Jan. 18.

Thursday’s game will be the fourth the pair has missed due to the suspension.

Sophomore guard Malcolm Hill has 61 points in three games since his teammates’ suspensions, including a game-winning basket in the final seconds against Penn State. Hill has averaged 20.3 points and five rebounds per game during Illinois’ winning streak.

“We also know if we don’t have the right mindset and prepare the right way, don’t communicate, we’re not connected — all those little things, if we don’t do those things, we don’t play as well,” Groce said. “We’ve got to bring those things to the table every single day.”

Groce has relied on senior center Nnanna Egwu for more than numbers on the stat sheet this season. He’s depended on the senior to be a leader on an Illini squad that has had injuries and distractions all season.

Egwu has done his part on the court as of late. During the Illini’s three-game winning streak, the senior has had 19 rebounds, averaging more than six per game. The senior center was big in Illinois’ 59-54 win over Michigan State on Saturday, grabbing nine rebounds over the Spartans’ conference-leading forward Branden Dawson.

Illinois will look to capitalize on an advantage down low against Michigan on Thursday. The Wolverines post the Big Ten’s worst rebounding margin at minus-3.

The Illini have spread the offense well over the past three games, with players scoring in double-digits nine times during the stretch. The offensive spread is partly due to point guard Jaylon Tate, who leads Illinois with 84 assists this season. Illinois proved its depth, finding a way to string together wins late in the season despite the absence of injured players and the distractions of suspended ones.

“To (be prepared) takes great mental toughness,” Groce said. “I do think we’ve made a lot of strides with that with this team.”