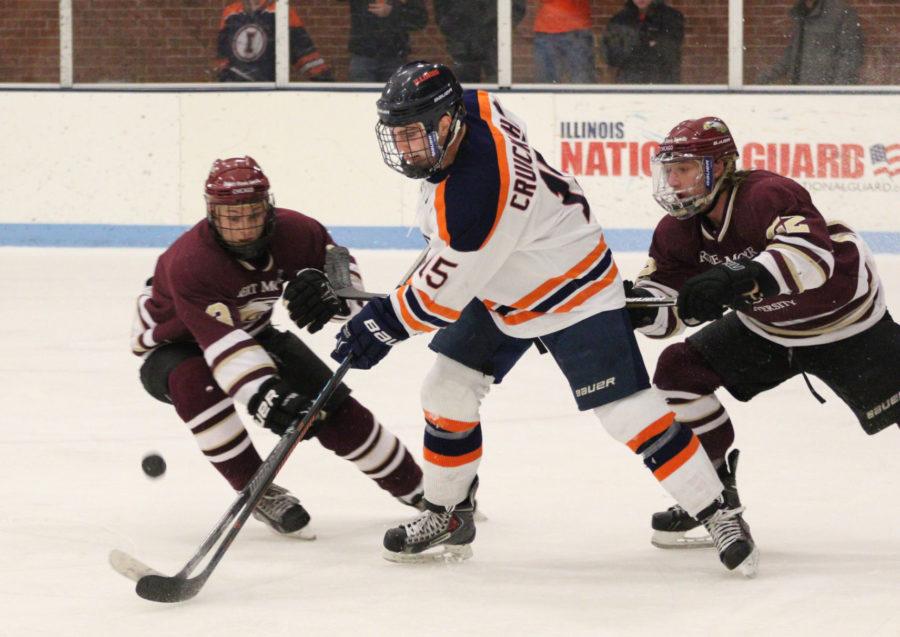 Illinois’ Eric Cruickshank attempts to maintain control as Robert Morris put the pressure on Jan. 24. If the Illini wants to beat Ohio, they will need to clean up their game, according to head coach Nick Fabbrini.

After three weeks of playing in the comfort of the Big Pond, the Illinois hockey team will have to fend-off its bitter rival Ohio in a hostile Bird Arena.

The Illini (20-14-1-0) and the Bobcats (24-6-2-1) are on opposite ends of the spectrum in terms of momentum. Illinois has gone 4-2 in the last three weeks against highly ranked ACHA opponents. Ohio, on the other hand, is winless in its last four games against Robert Morris and Oklahoma, both of which lost to Illinois in recent weeks.

According to head coach Nick Fabbrini, Ohio is suffering from the loss of two of its leading scorers and its top defenseman. Forwards Joey Breslin and Michael Harris and defenseman Tyler Benson joined Illinois’ Olen brothers at the World University Games in Granada, Spain. However, the Illini understand that there will be added motivation on the Bobcats part because of the height of this rivalry.

“Being a freshman, I haven’t had the experience of being around that team a lot,” wingman Eric Cruickshank said. “All I hear about from the seniors, juniors and Fabbrini was that they do not like Ohio. They are the biggest rival we have had going back to when Fabbrini played.”

Typically when the Illini play a division rival, the game ends up getting physical. In Illinois’ Saturday game against Lindenwood, the teams recorded a total of 90 penalty minutes. Wingman James Mcging believes this weekend’s series could get even more physical because of how much smaller the Bobcats’ rink is compared to the Illini’s.

“In our rink, you don’t notice it as much because it is so big,” Mcging said. “But that is something that we struggled with when we played at Lindenwood because they were a really physical team. I think that we will be fine, though, because we have a lot of guys who can be physical as well.”

Fabbrini said that the smaller rink will also magnify any mistakes Illinois makes because turnovers can be turned into goals much quicker. This weekend, Fabbrini wants to see his team clean up its game, especially on the powerplay.

In Illinois’ loss to Lindenwood, the Illini went 2-for-12 on their powerplay, an issue Fabbrini addressed in practice this week. He pointed out that the Illini were having several of their shots blocked by opposing defensemen during games.

Illinois currently sits fourth in the CSCHL and a sweep of floundering, first-place Ohio could vault the Illini into the upper-half of the division and generate even more confidence for the team a week ahead of the CSCHL playoffs.

“We are going to try and continue to keep them down in the dumps, and hopefully we can get two wins out of that,” Cruickshank said. “We want to come back in time for the playoffs with a sweep and a lot of momentum going our way.”