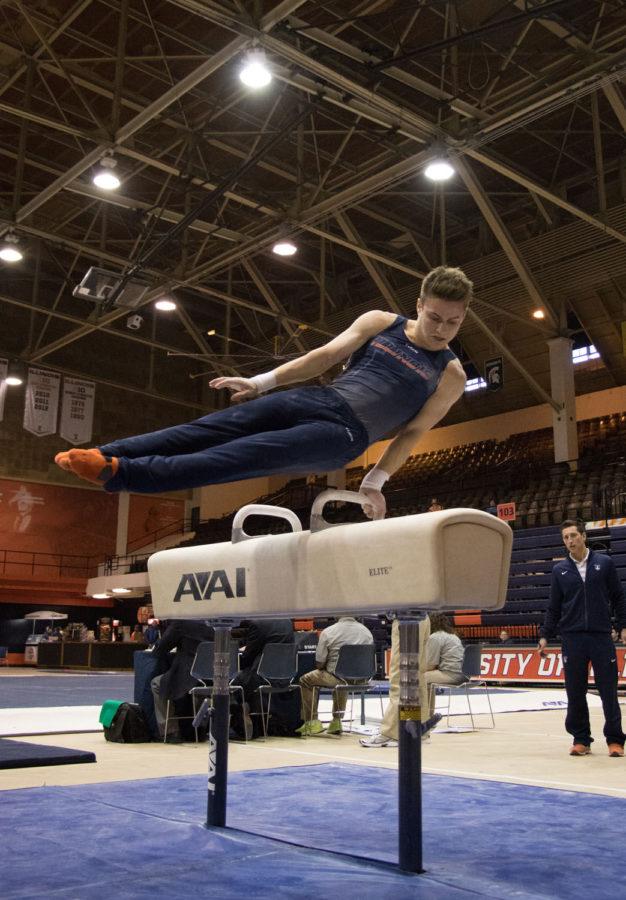 Illinois’ Bobby Baker performs on the pommel horse on Saturday. He won the all-around title with his score of 89.550, which is the third-highest in team history.

The Illinois men’s gymnastics team entered its meet against No. 2 Penn State Saturday at Huff Hall without its star gymnast — junior C.J. Maestas — and exited with a 441.300-434.500 win over one of the nation’s best.

Illinois never trailed in the competition and seemed to have an increased level of energy and motivation against its undefeated opponent.

“Rankings weren’t really much of a stress for us,” senior Jordan Valdez said. “We looked at it as having to bring a lot of intensity because C.J. wasn’t going to be here and we have one of the best teams in the country coming into our house. We had to make it to where we were comfortable and they’re shaky.”

The meet started off with back-to-back personal best records set by junior Logan Bradley and sophomore Thomas Gibbs on the floor exercise. The Illini finished the event with a score of 73.550, which ranks fifth in school history and is a season best.

Illinois kept the momentum in its favor during its second routine, the pommel horse. With the help of strong performances from Bradley, freshman Bobby Baker and sophomore Matt Foster, the team recorded the second-highest score in Illinois history (73.350).

While the Illini never lost the lead, there were moments when it was possible for Penn State to make a late comeback.

Coming into the last two events, parallel bars and high bar, Illinois had less than a two-point lead over its Big Ten foe.

“I had my first taste of nerves during those last two events,” head coach Justin Spring said. “But the guys didn’t let it phase them at all and they closed like machines.”

Picking up the bulk of the work in Maestas’ absence were Baker, Gibbs and junior Joey Peters. Peters competed in every event but the pommel horse, while Baker and Gibbs competed for the all-around title. Gibbs finished with an all-around score of 85.900, second only to Baker’s title-clinching score of 89.550. Baker’s score ranks third in team history.

“It was a little nerve wrecking, watching them come in,” Baker said of Penn State. “Not having C.J. here was also in the back of our heads, but it was all about momentum.”

For the second-straight week, the Illini broke the school record for most points in a meet (441.300). The team also set the best score in team history on the parallel bars, scoring a 74.550.

Illinois and Oklahoma are now the only undefeated teams in the country.