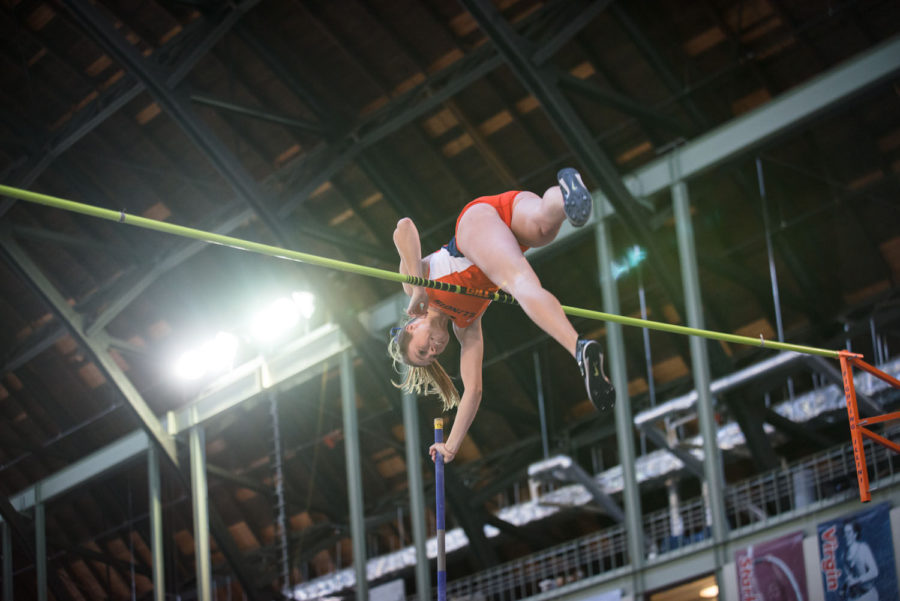 Stephanie Richartz releases the pole as she lifts past the bar to break her previous record with a height of 4.38 meters.

It wasn’t the most competitive field, but the Illinois women’s track and field team didn’t stoop to the level of the competition Saturday.

The Illini captured 12 event titles and secured first place in the Orange and Blue Open at the Armory, winning by 94 points, almost twice as many as second-place Northern Illinois.

Richartz was sidelined last season due to injury but has taken first place in four of the Illini’s last five meets.

“I’m absolutely thrilled to have broken the school record,” Richartz said. “I haven’t jumped nearly that high in several years, so it feels good to be back healthy and jumping high.”

Richartz’s height stands as the third-best height in the country this indoor season, only behind No. 1 Arkansas’ Sandi Morris, who has cleared 4.40 meters, and Stephen F. Austin’s Demi Payne, who has jumped 4.63 meters.

Her accomplishment has Richartz motivated for the Illini’s biggest meet of the season, next weekend’s Indoor Big Ten Championships.

“Big Tens is a very unique and exhilarating atmosphere,” Richartz said. “Having jumped the third-highest in the country simply makes me feel more prepared for the approaching Big Ten meet. I’m excited for the potential that the vault group has as a whole and how that will pan out in the Big Ten meet.”

Currently No. 10 Wisconsin is the only ranked Big Ten team, but senior Breeana Coleman said the Illini’s focus is at an all-time high this week in practice.

Coleman was victorious in the 60 meters and 60-meter hurdles, finishing with times of 7.58 seconds and 8.30 seconds, respectively.

Coleman says she is geared up for next weekend, and added that she knows she can run even faster than she did Saturday.

“I know that I can run a faster time at this point in the season,” Coleman said. “An 8.30 is the fastest time that I have ever ran at this facility, so I am pretty excited for this (upcoming) weekend.”

Sophomore Kandie Bloch-Jones, who is defending her Big Ten championship in the high jump, is the team’s sole returning Big Ten individual champion.

Bloch-Jones was another one of the team’s 12 winners Saturday, clearing 5 feet, 8.75 inches, to beat two jumpers from Northern Illinois, Chennel Palmer and Claudette Day.

Overall, Bloch-Jones said Saturday was more of a learning experience than anything else.

“I cleared five feet, nine inches and after that skipped to six feet, where I was eager to jump at,” Bloch-Jones said. “Therefore, I didn’t have very good attempts. I want to learn how to manage myself better, so I can relax and do my thing.”