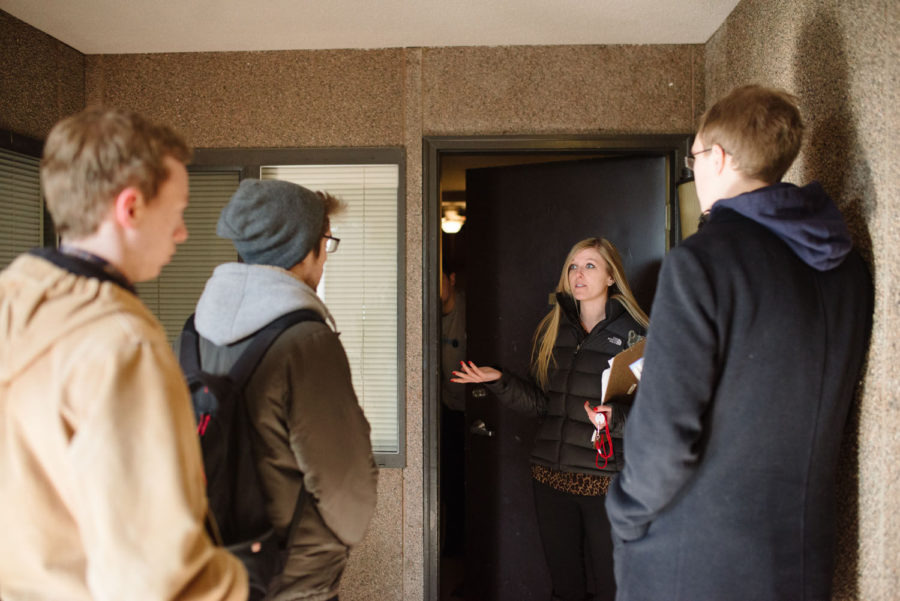 Whether a freshman, sophomore or junior, apartment hunting comes with its fair share of challenges, like finding a leasing company, budgeting for rent, finding roommates and paying utilities (all of which are just skimming the surface of this painstaking process).

But according to Brittany Glenn, program manager at the Tenant Union, students can make finding an apartment a little easier. The University’s Tenant Union, which is located in Room 326 at the Illini Union, allows students to learn about various housing options and the countless apartment companies on campus that market for students and non-students alike.

“We have an array of different services,” said Glenn. “We do lease reviews for students, … and we also have the complaint records here on file for landlords from the past five years, so all tenants can see what some of their complaints are from their peers.

She also added that students can request information through the Tenant Union’s website, as well as attend “signature programs and workshops offered throughout the semester, pertaining to speed-roommating and the nuts-and-bolts of apartment searching.”

According to Glenn, students often overlook “their move-in and move-out dates, especially when there are holdover fees … if they’re in the unit longer than the date they’re supposed to be.”

One piece of advice she gives students is to be aware of the specifics of the furniture, and whether it is included in the lease.

“(In the past) students have been promised furniture (verbally), and since it’s not stated in the lease, the landlord is not obligated to give it to them,” she said.

Namita Parikh, senior in LAS, had an entirely different problem. She leased from Campus Property Management last year at 52 E. Armory Ave. in Champaign, and described problems with the building’s overall maintenance.

“There was a leaking bathroom faucet that they failed to fix after we repeatedly called them,” she said. “Another problem was that my roommate had a hole in her ceiling. Both of these issues weren’t fixed until the end of our second semester.”

Overall, Parikh said she wouldn’t recommend living with Campus Property Management and that there are other options available.

When looking for an apartment, Parikh suggested proximity to campus, as well as making sure it is “spacious enough for the number of roommates and at an affordable cost.”

Though Parikh had a negative experience, Rachel Bessonny, a senior in Business, had quite the opposite experience this year living with Bankier Apartments at Skylight Tower.

“The apartment was a triple. It was a pass-down on Green Street, which is a pretty popular location,” she said. “It was also recently renovated, and it had a washer and dryer unit, and two full bathrooms.”

She said Bankier allowed rent to be paid electronically, and had a really efficient maintenance service, as well as coordination in terms of scheduling. Another thing she liked was how she got a discount on her rent by showing the apartment to other potential tenants.

“I would recommend Bankier, because it seems (like it is) more run by, like, a family,” she said.

Her idea of a perfect apartment would be one with a “washer/dryer, a dishwasher (and) general upkeep, like newer carpets, location and parking.”

According to Bessonny, a lot of it also depends on what she’s heard from her peers.

Both Parikh and Bessonny agreed that in order to begin apartment searching, starting early is key, possibly as early as first semester the year before move-in. They also said it is important to be patient when choosing an apartment.

“Don’t be intimidated into signing into the next day,” Bessonny said. “Take the time to get critical details, and make sure you talk to your parents, too.”

Jaini can be reached at [email protected]