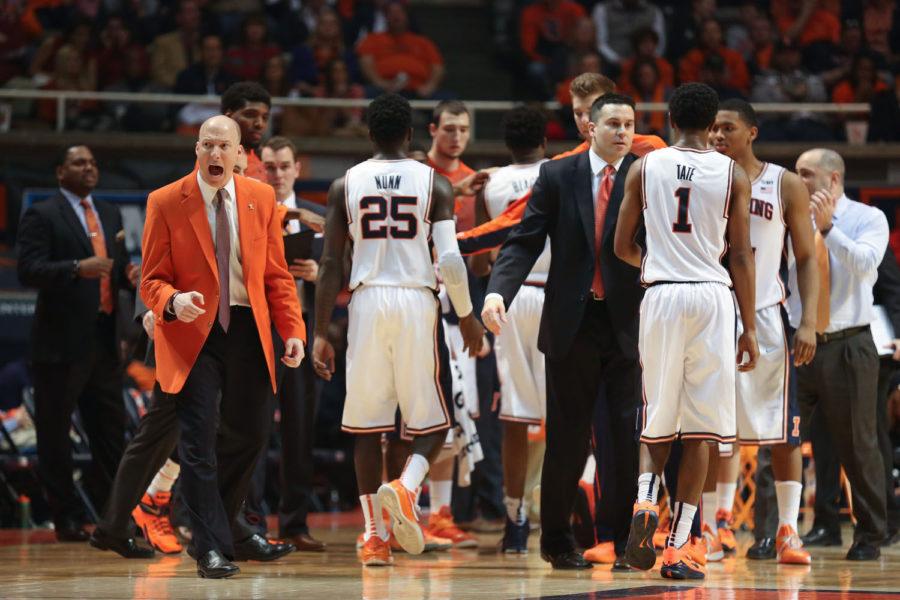 Illinois’ head coach John Groce reacts to the officials after calling a timeout during the game against Indiana at State Farm Center on Jan. 18. The Illini lost 80-74.

The Illini men’s basketball team has just two games left to make a final push to the NCAA tournament.

Trying to avoid back-to-back trips to the NIT, Illinois looks to close out the season with back-to-back wins against Nebraska and Purdue this week.

The Illini lost to Nebraska in mid-January in one of its ugliest games of the year, scoring a season-low 43 points in the 53-43 loss. Illinois shot 27.3 percent from the field and 20.7 from behind the arc.

Against Purdue, it was a different story. Illinois was boosted by a 12-3 run late in the game to beat the Boilermakers 66-57 later that month.

Two more victories will get the Illini to the 20-win mark for the first time since 2012-13, when the team finished the regular season with 21 wins and advanced to the round of 32 in the NCAA tournament.

After the team’s 86-60 win over Northwestern on Saturday, head coach John Groce said the team is executing on both sides of the floor.

“We were good in both areas (offensively and defensively),” Groce said. “(It was) maybe as high of a mark in both areas simultaneously we’ve had, maybe even all season. Certainly for the first time in a while.”

Living and dying by the three

Illinois struggled shooting the ball against Michigan State and Iowa last week. The team shot a combined 31 percent from the floor in the two losses and scored just 53 and 60 points, respectively.

But in their win Saturday, the Illini shot 47.4 percent, draining 14 threes throughout the game.

“We don’t care who is scoring,” senior guard Rayvonte Rice said. “We’re just looking for each other and playing unselfish.”

Rice had 19 points and seven rebounds in his first start since injuring his hand and being suspended in January.

The Illini players know their loss against Iowa was uncharacteristic.

Senior guard Ahmad Starks had six turnovers against the Hawkeyes. The guard has averaged just 1.1 turnover per game throughout the season.

“That’s a fluke for me,” Starks said, looking back on the game.

Starks reverted back to his average Saturday with just one turnover and 17 points.

The Illini have found themselves in foul trouble, sending teams into the bonus in every half in their last three games.

Illinois has committed 64 fouls over its past three contests. Ten alone have belonged to freshman Leron Black.

While Groce has called on his players to play with a higher intensity, the team is looking to balance its aggression with responsible play.

Illinois has allowed opponents 50 points at the free throw line in its last three games alone.

With two games remaining in the regular season and an NCAA tournament bid on the line, the Illini are looking to limit giveaways and cash in on opportunities themselves.