Illinois hockey gets its offense going against Eastern Michigan 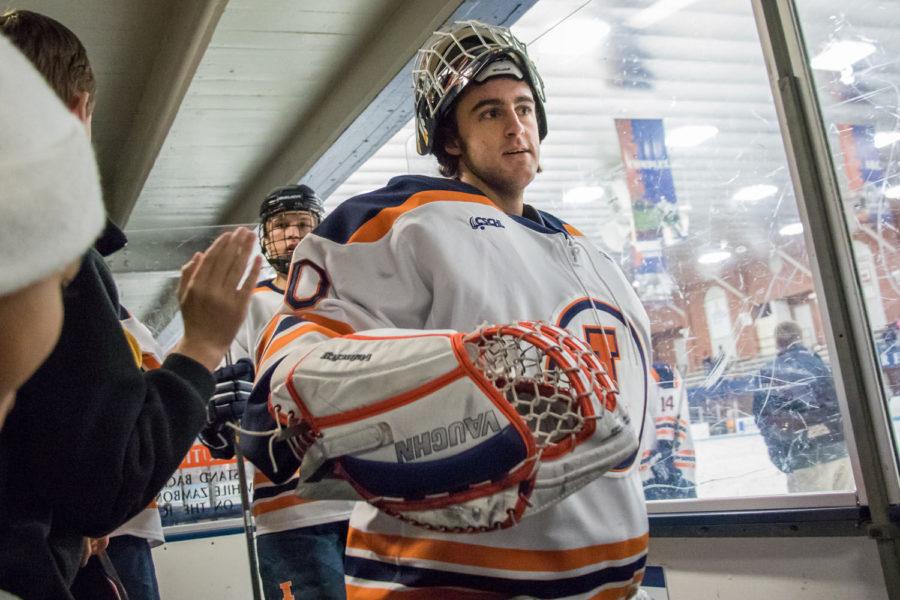 Illinois’ Zachary Danna returns to the locker room after the hockey game v. Eastern Michigan at the Ice Arena on Feb. 27. Illinois won 10-1.

In its final two regular season games, the Illinois hockey team saw offensive production from various players in its series against Eastern Michigan.

The Illini took a season-high 95 shots in the series and had eight different players score goals. The high-powered offensive performances led to 10-1 and 3-2 victories Friday and Saturday, respectively.

Head coach Nick Fabbrini was glad to see so many players contribute in the series ahead of Thursday’s opening-round national tournament game against John Carroll University.

Defenseman Aaron Dusek, who scored two goals in Friday’s game, said the Eastern Michigan series will serve as an offensive boost of confidence at nationals for players who typically don’t score.

“I was probably going five or six games without contributing on the offensive side,” Dusek said. “It was nice to kind of finally break that streak and hopefully continue it onwards towards nationals.”

Sophomore goaltender Zach Danna started his second and third games of the season in the Illini’s weekend sweep of the Eagles.

In the 10-1 victory on Friday, Danna held onto a shutout heading into the third period, but Eastern Michigan’s Michael Salata scored the team’s only goal with about a minute left in the game. After the win, Fabbrini’s praised Danna’s 21 saves.

“He made back-to-back breakaway saves in the second period, and did a good job of helping us maintain the lead,” Fabbrini said. “We are disappointed that we weren’t able to hold on to the shutout at the end there.”

Danna allowed two goals in the first period of Saturday’s series finale, but prevented any more goals the rest of the way en route to the 3-2 victory.

Although he is unlikely to start in the postseason, Fabbrini said he is optimistic for the future of the team with three quality goaltenders in Danna, Joe Olen and Zev Grumet-Morris committed to the team for another year.

Illinois managed to avoid another disappointing loss on Saturday with a second-period comeback.

This season, the Illini have lost five games on Saturdays after beating the same team the previous day — four of those losses coming at home.

In the locker room, Fabbrini reminded his players that one mistake during the national tournament could cost the team the game. The Illini took the message to heart and scored two unanswered goals in the second period to claim victory in their final home game of the season.

“Taking 20 minutes off at nationals could potentially cost us our season. You don’t get a redo at the national tournament,” Fabbrini said. “We talked about coming out and controlling the next period of play and getting back to the things that we do well as a team, and I think we did a nice job of that.”