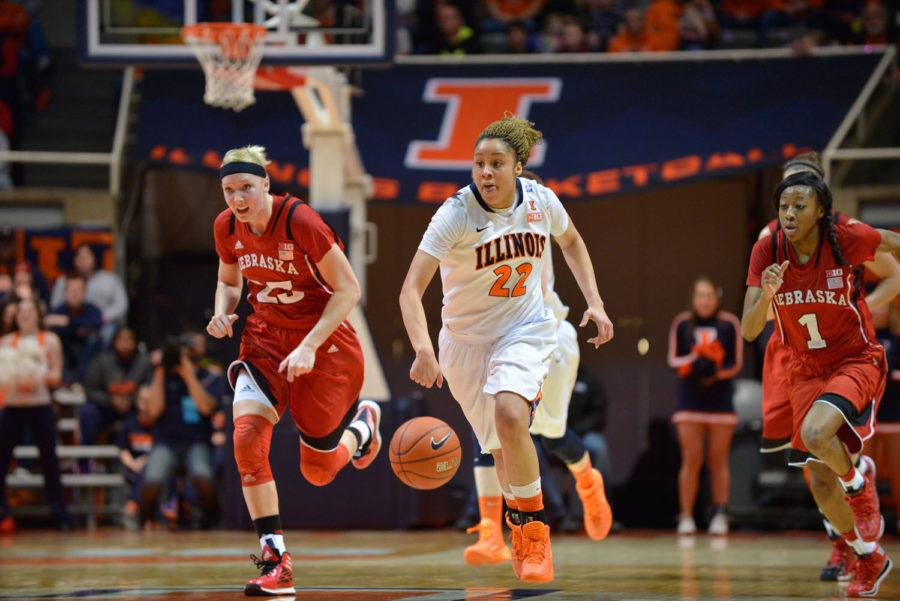 Illinois’ Ivory Crawford dribbles the ball during the game against Nebraska on Jan. 12, 2014. The senior could play in the final game of her Illini career in the Big Ten tournament.

Now that the regular season is over, it’s tournament time for the Illinois women’s basketball team. While a 15-15 (6-12 Big Ten) record doesn’t put the Illini in NCAA tournament striking distance, they’ll have a chance to make some noise in the Big Ten tournament.

Coming off Saturday’s home win on Senior Day over Michigan, head coach Matt Bollant and his squad have some momentum heading into the conference tournament. The win over Michigan landed Illinois the No. 10 seed in the Big Ten tournament, allowing it to bypass Wednesday’s first round of the tournament.

Being the No. 10 seed pits the Illini against No. 7 seed Nebraska, a team that was ranked in the top 25 nationally for the majority of the season but is currently unranked.

The Cornhuskers will be a familiar opponent for the Illini when they take to the floor at the Sears Centre Arena in Hoffman Estates, Illinois, on Thursday night. Illinois lost both of its meetings with Nebraska this season, but that doesn’t tell the full story.

The combined deficit of the two games was seven points, and Illinois was forced to play both of those games without senior Ivory Crawford, who was sidelined with a knee injury. While the Illini have been competitive against the Cornhuskers this year, it will be a tall task for Illinois to finally get in the win column against Nebraska — the reigning Big Ten tournament champions.

“(Nebraska) has four seniors that are really talented and won the tournament last year,” Bollant said. “So I’m sure they have a lot of positive feelings and beliefs coming into the tournament and I’m expecting Nebraska to play really well against us.”

Coming into the season, Bollant and his players expected to shoot well from behind the arc this season. While players like Kyley Simmons and Brittany Carter have been good from long range at times, the team’s shots have been inconsistent overall. In their most recent meeting with Michigan, the Illini shot 50 percent from the field, but only 23.5 percent from behind the arc.

“(Against Michigan State) we shot 27 threes and I’m not sure, with our personnel, we should be shooting 27 threes,” Bollant said following the Michigan game. “As good as our post play is with Jacqui (Grant) and Chatrice (White) and as good as Ivory (Crawford) is penetrating, I think we need to be careful not to rely on (3-point shooting) that much.”

The value of Ivory

As mentioned previously, the Illini played both of their games against Nebraska without Crawford. Her showing on Senior Day demonstrated why she’s so valuable to this team — she’s going to finish her career in the top 20 in the program’s history in more than one statistical category.

She finished the regular season finale with 19 points, nine rebounds, six assists and five steals and said after the game that the whole time she was overwhelmed with excitement.

For Crawford to avoid her career coming to a close Thursday, she’ll have to play up to her season averages. She’s first on the team in points per game, third in rebounds per game, and third in total assists. She’s also one of the team’s on-floor leaders, one of two seniors who plays significant minutes.

“Both times we played (Nebraska) late in the game, we missed some opportunities that the ball could have been in (Crawford’s) hands if she’d not been hurt,” Bollant said.