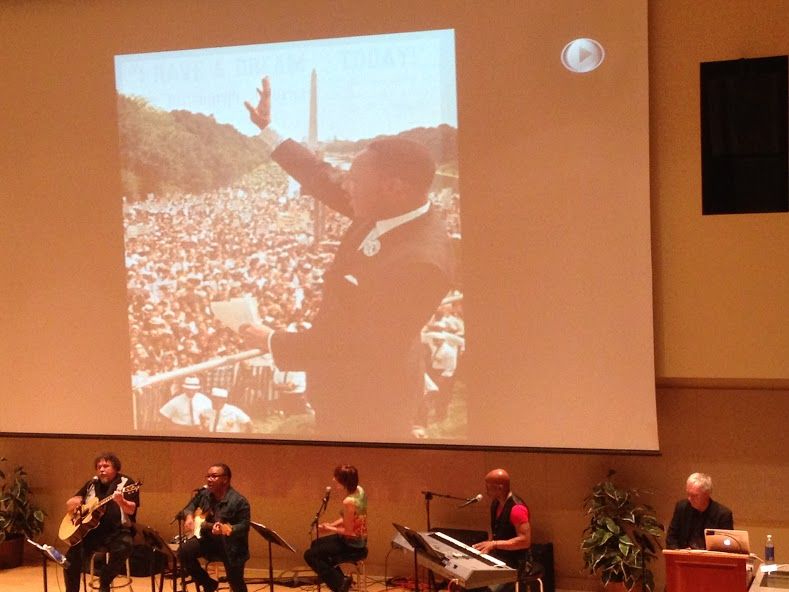 Ken Paulson plays a slideshow of photographs from American history as The Beatle’s “Revolution” plays.

The Beatles and Ice-T might know more about the First Amendment than you’d think.

A Tuesday night musical performance titled, “Freedom Sings: Speech, Civility and the University of Illinois” took on a different medium to teach faculty and students about the freedom of speech.

The event, held at the Knight Auditorium in the Spurlock Museum, was the first event of many in a series being planned by the Department of Journalism on the topic of free speech.

Narrating the event was Ken Paulson, president of the First Amendment Center at Vanderbilt University and former USA Today editor-in-chief, who gave the history behind the songs and their censorship, as well as how some of them served as the backdrop to many important movements in American history.

Paulson is a graduate from the University’s College of Law and worked at The Daily Illini for three years.

Paulson wrote the show, which he said has been going on for fifteen years. He rewrites the show every time they do it. Many of the songs featured in the show were censored at some point in American history.

“It’s basically taking a number of different songs, writing a narrative around them, and trying to weave them into a story about free speech and music,” Paulson said. “We find that audiences of all ages are tremendously responsive, and it’s one of the things I’m most proud of.”

The show opened with the band playing The Beatles’ “Revolution” to a montage of iconic photos from different time periods in American history. Janis Ian’s “Society’s Child,” about an interracial relationship, and Bob Dylan’s “Blowin’ in the Wind,” about civil rights,  were played early in the show. Paulson and the band moved through different progressive movements, including the anti-war movement — Neil Young’s “Ohio” — the environmental movement  — Marvin Gaye’s “Mercy, Mercy Me” — and the women’s right movement — Loretta Lynn’s “The Pill.”

Paulson introduced each song with stories about censorship and the First Amendment, one standout regarded the FBI opening a 18-month investigation into allegedly explicit lyrics in The Kingsmen’s “Louie, Louie”.

Paulson joked throughout the show, at one point saying that faculty members would be drug tested as they left the show after the audience sang along with a medley of songs censored due to their alleged references to drugs.

The event showcased a variety of music from the 1950’s and leading up to contemporary tunes, with a clip of Ice-T’s “Cop Killer” being played right after the band finished Woody Guthrie’s “This Land is Your Land”.

Among those in attendance was Chancellor Phyllis Wise, who thought the show was fantastic.

“I think music can say things that sometimes speeches don’t get across as beautifully,” Wise said.

Rich Martin, journalism department head, said in his opening remarks that the event was timely with free speech issues being prevalent on campus. The University was recently dubbed one of the worst universities for free speech by the Foundation for Individual Rights in Education.

Paulson echoed those sentiments after the show, adding that the University has had “extraordinary discussion” about free speech and what a professor or possible professor can say.

“It’s brought these five freedoms of the First Amendment to the fore on campus, and I think people who wanted to create a constructive conversation about these freedoms thought it would be helpful to stage an event like this,” Paulson said.