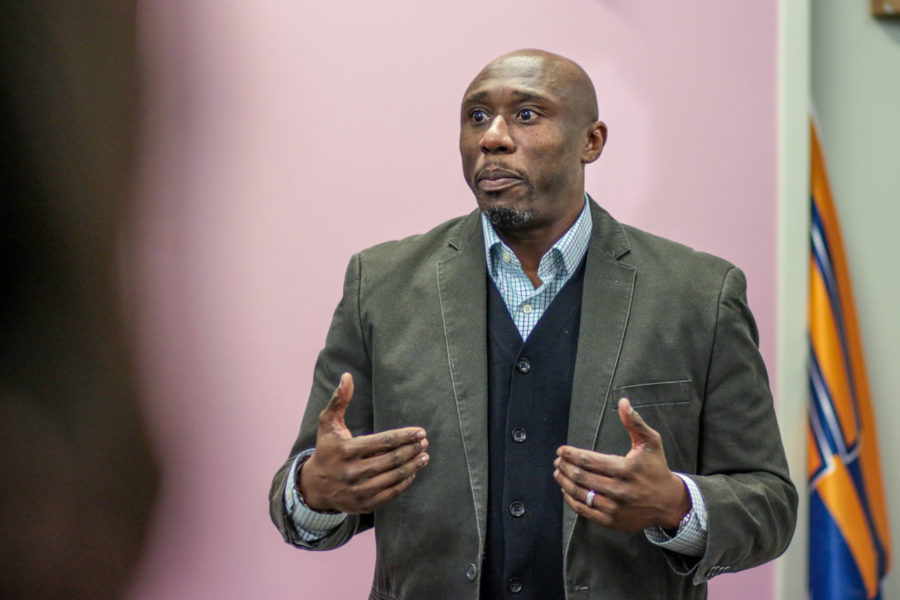 Dr. F. Willis Johnson, a pastor from Ferguson, Missouri, talks about his experiences during the Ferguson unrest at the Bruce D. Nesbitt African American Cultural Center on Friday, March 6.

Dynesha Grissom, clinical counselor at the Counseling Center, introduced Johnson as “a man of God’s heart.”

“I’m not here to tell you what to think, how to think, but I will tell you to think and continue to engage,” Johnson said.

He spoke about his personal experience in Ferguson as it was being covered by the news, and discussed how people can move “forward” from issues like those brought up in Ferguson by working backwards.

Working backwards, Johnson said, means meeting people where they are and guiding them to where people can start working together.

He also discussed the idea of social gospel throughout the event. This idea, he said, is about how Christian ethics and principles apply to people’s lives in social, political and economic ways.

“This idea of just simply saying, we take the Bible and lay it over the Constitution or we take the Bible, our traditions, and fold them into our democratic way and on market place practice has not, is not, will not, can not serve well, neither just the people nor the truth of the God in which its attempting to identify with,” Johnson said.

Johnson mentioned a question asked by his wife: “Why are they protesting?” But he said it was not a question of “they shouldn’t be protesting.”

Johnson said people often critique rather than being conscious of others and the situations taking place. He said people have to “affirm.”

“Part of affirming, a lot of us struggle with affirmation or affirming people because we think if we’re accepting a respect towards something, then that is us being complacent with and to,” Johnson said.

Grissom said she felt it was a prime opportunity for the Nesbitt Center to continue conversations on campus regarding social justice and advocacy.

“This was an initiative to say, ‘Let’s continue those and let’s expand beyond on what we’re doing as students or staff and faculty at the University of Illinois,’” Grissom said. “I just wanted to have an opportunity for the campus to experience (Johnson) and to have him present.”

The event allowed students to ask Johnson questions and “pick his mind” about their responsibilities, Grissom said. She added that inviting Johnson to speak at the University also helped realize what the faith-based communities’ responsibilities are in terms of social activism.

“I really came wanting to get a better understanding of what this kind of work does to a community,” Cobb said. “His metaphor about being a community that knew something was wrong, but didn’t know how deep the problem was, was profound.”

Cobb said there are parallels between the work being done in Urbana and in Ferguson. She said bringing attention to issues like those in Ferguson can lead to remedies that will help prevent social injustices.

“I’ve had the chance to go on all these college campuses, and try to figure out how we truly knit together in these communities,” Johnson said.