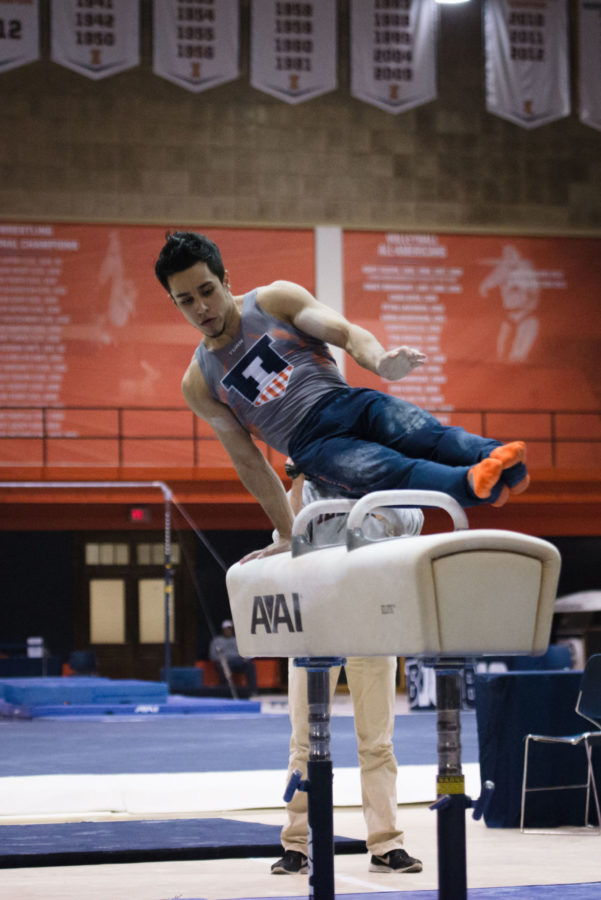 Illinois’ C.J. Maestas performs a routine on the pommel horse during the meet against Stanford at Huff Hall on Friday. The Illini lost 21-9 but won against Nebraska on Sunday.

The Illinois men’s gymnastics’ graduating class ended its career at Huff Hall on a winning note against Nebraska on Sunday, despite losing to Stanford on Friday.

The Illini lost to Stanford by a score of 21-9 on Friday. The weekend opener was played with a match-play format. No set lineups are submitted in match play — coaches are allowed to choose which gymnast they want to compete after the opposing team has completed its routine. Overall scores are still submitted to the NCAA.

Head coach Justin Spring said the match-play format seemed to add anxiety to the team, which trailed the whole meet.

“Too many things went wrong against Stanford and it snowballed,” Spring said.

Against Nebraska on Sunday, which was recognized as Senior Day, Illinois had a polar opposite meet, winning by a score of 436.700-423.450.

The five gymnasts who were honored before the meet were redshirt juniors C.J. Maestas and Jacob Tilsley and seniors Jordan Valdez, Mike Wilner and Nick Sacramento. Sacramento became the team’s manager after suffering from a career-ending injury his freshman year. Every member of the senior class won at least one event title against Nebraska except for Tilsley.

Maestas won the floor exercise, pommel horse and parallel bars titles — his parallel title was split with Valdez, who also won the high bar title. Wilner won the still rings title. Huff Hall let out a cheer every time one of Maestas’ scores were presented.

With his three title victories, Maestas moved to 10th on the Illinois all-time title list.

“Going out the way I did was amazing,” Maestas said.

At the end of his parallel bars routine, Maestas blew a kiss to the crowd.

“That kiss was for my family,” Maestas said. “Especially for my mom. She’s my angel. And my little sister, who I practically raised.”

While Maestas received many cheers, Huff Hall was at its loudest after Valdez completed his high bar routine, which was also the last routine of the meet.

Afterward, he walked off and all of his teammates greeted him with a hug.

“Looking back on five years of ups, downs, pain (and) injury, I just wanted to give my absolute best for (the team) one more time here,” Valdez said.