Illini basketball headed back to NIT, opens against Alabama 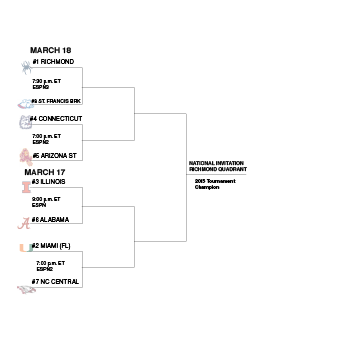 The Illinois men’s basketball team didn’t expect to be here.

Heading into this season, Illinois was projected to be in contention for an NCAA tournament berth. The team faced injuries, suspensions and other obstacles throughout the season that, in the end, proved detrimental to its postseason chances.

Instead of playing in the NCAA tournament, the Illini (19-13, 9-9 Big Ten) will return to the National Invitational Tournament for a second year, this time as a 3-seed, and will face 6-seed Alabama (18-14, 8-10 SEC) in the first round on Tuesday in Tuscaloosa, Alabama.

“We understand it’s a great opportunity,” head coach John Groce said. “All the teams that are in the NIT would tell you that they would have preferred to be in the NCAA tournament.”

While the first three rounds of the NIT would usually be played at the home arena of the higher seeded team, that will not be the case for the Illini, who will have to play all of their games on the road. With the ongoing renovations to State Farm Center, the Illini will have to play all their games on the road, should they advance past Alabama on Tuesday.

The Illini have been inconsistent all season and have played significantly worse away from home — Illinois is 2-8 on the road this year, not counting neutral-site games.

Alabama finished eighth in the SEC this season and is one of two SEC teams in the NIT field. The Illini are the only Big Ten team in this year’s NIT.

If Illinois were to advance past the first round the Illini would face the winner of Miami and N.C. Central. Illinois lost to Miami 70-61 on Dec. 2.

Last season, the No. 2-seeded Illini beat Boston University 66-62 in the first round of the NIT before falling to Clemson 50-49 in the second round. Like this season, both of those games were on the road because of State Farm Center renovations.

With Illinois’ NIT selection, the Illini will miss the NCAA tournament for the second-straight year; the first time the program has done so since the 1991-1992 season.

Groce said the team will hopefully come into the NIT willing to learn as much as it can from this year’s postseason play.

“Any time you can get in postseason play, it’s a great opportunity,” Groce said. “Guys continue to learn and grow and learn from the tournament.

“We’re going to try to make the most of this opportunity.”