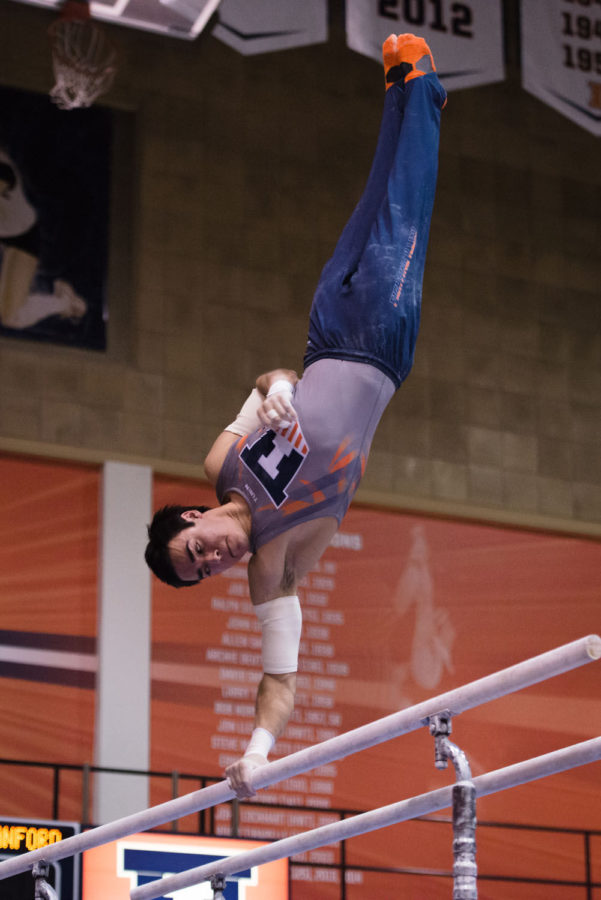 Illinois’ Jordan Valdez performs a routine on the parallel bars during the meet against Stanford at Huff Hall on Friday, March 6.The Illini lost 21-9.

Going up against a top-five opponent has become a problem for the Illinois men’s gymnastics team. The Illini lost to the two-time defending NCAA champion Michigan Wolverines on Sunday by a score of 435.750-428.500 in Ann Arbor, Mich.

While No. 3-ranked Illinois won five event titles on the night, it was No. 4 Michigan’s depth that played the biggest factor.

The event that the Illini lacked the most depth in was parallel bars — Illinois didn’t have one gymnast post a score better than 14.500 and four out of five recorded scores below 14.000.

This marks the third-straight meet that Illinois lost to a top-five opponent. The previous two losses came against No. 1 Oklahoma and No. 2 Stanford, respectively.

“After we got momentum, we always seemed to stumble a bit,” Spring said.

A promising sign for Illinois all season has been the production of still rings specialist Mike Wilner, who won the still rings title with a score of 15.800. The senior serves as a good complement to the 2012 NCAA still rings national champion, C.J. Maestas, who has battled illness and injury throughout the season.

“Especially with C.J. not being in (on still rings tonight) he’s certainly been our big go-to guy and had his best routine this year today,” Spring said of Wilner. “That was huge, and we’re going to need him to do that again.”

The other four Illini gymnasts who earned titles on the night were Maestas, freshman Bobby Baker, junior Logan Bradley, and senior Jordan Valdez. Maestas’ title came on the floor exercise, where he posted a score of 15.850. His title is the 46th of his career, which breaks the tie he had with assistant coach Daniel Ribeiro — who graduated in 2011 — for 10th on Illinois’ all-time titles list.

Baker won the all-around title, but was the only gymnast competing for the title. Bradley tied for first on the pommel horse, and Valdez picked up his title on the high bar. Junior Fred Hartville was five hundredths of a point away from having a split of the vault title.

Valdez said the meet was filled with uncharacteristic happenings.

“We’ve been building off our losses, and I think tonight was just a combination of 11-straight competitions and fluke occurrences,” Valdez said. “This will be the first full weekend where we have a break, so we can focus on perfecting everyone’s routine and getting healthy for Big Tens.”

Finishing the regular season with an 11-3 record, the next competition for Illinois will be the Big Ten Championships on March 27-28. While the Illini struggled against the Wolverines, Spring believes the team will be prepared in time for the competition.

“We didn’t show up today for whatever reason,” Spring said. “I have full belief that our team will get done whatever needs to get done in time (for the Big Ten Championship).”