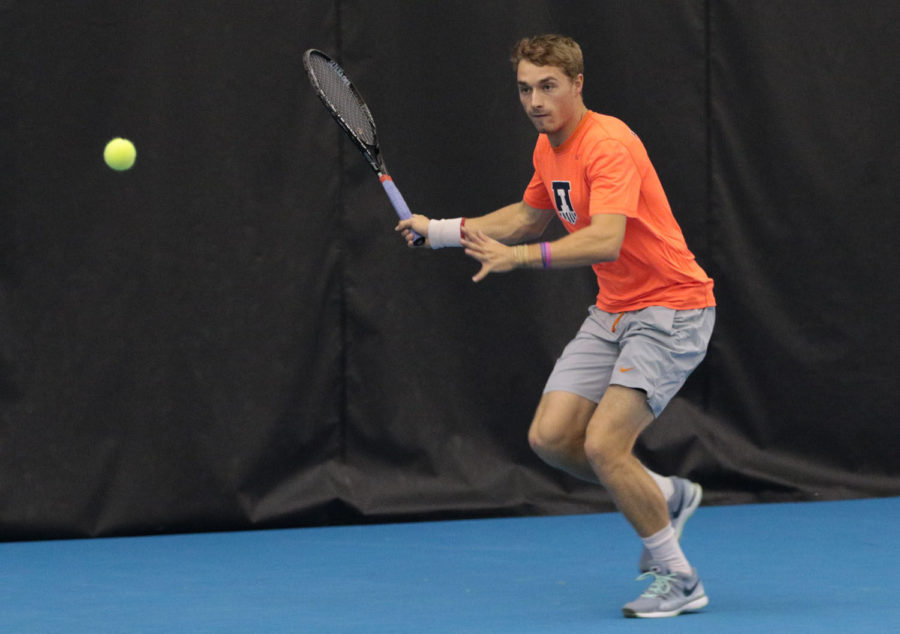 Illinois’ Tim Kopinski saves a ball during a match vs. Northwestern on Feb. 20. Kopinski didn’t play this weekend because the Illini were trying out new doubles teams.

The Illinois men’s tennis team is tearing it up on its “March Through Texas” trip. The No. 4 Illini defeated two top-10 teams in two days over the weekend, beating No. 9 Texas 4-2 on Saturday and No. 8 Texas A&M 4-2 on Sunday. Even without usual-No. 1 singles player Farris Gosea, who was suspended for breaking team rules, new doubles lineups gave the Illini an early lead in Austin, Texas, and the team’s stellar freshmen secured the victory in College Station, Texas.

The Illini broke out some new doubles teams against the Longhorns. The Illini’s usual top duo of No. 12 Ross Guignon and Tim Kopinski didn’t play this weekend, even as Illinois faced three nationally ranked doubles pairs. Instead, Jared Hiltzik and Kopinski took over the No. 1 doubles spot. Head coach Brad Dancer said he thought it might be valuable for the team to use Guignon and Kopinski’s doubles expertise on two different courts.

Hiltzik and Kopinski responded by picking up the first Illini win of the day over No. 35 Lloyd Glasspool and Soren Hess-Olesen 7-5. The team of Blake Bazarnik and Brian Page was also back in action after providing a spark against Kentucky and Purdue earlier in the season. The pair secured the doubles point with a 6-3 win over Adrien Berkowicz and George Goldhoff.

“I think overall, that experiment has been fairly positive,” Dancer said. “We’ve got a full team capable of being ready to go. It’s hard making decisions when you have good players and trying to figure out who deserves playing time.”

In singles, the Illini’s top-two players went down. No. 18 Hiltzik suffered his first loss of the spring season to No. 2 Hess-Olesen 6-1, 6-4 and No. 32 Kopinski fell to No. 52 Glasspool in only his second loss of the spring.

But the Illini’s depth shone through, and victories on courts three, four and six secured the win for the Illini. No. 49 Aleks Vukic and No. 76 Aron Hiltzik notched victories against ranked opponents, while Blake Bazarnik came through to clinch the match with a win over John Mee.

In only his sixth singles match of the spring, Bazarnik came back after dropping a tightly contested first set to win 5-7, 6-4, 6-3. Illinois’ victory snapped a home winning streak of almost two years for Texas.

The Illini’s freshmen played an even bigger role Sunday. Texas A&M’s strong doubles play has been integral to its success this year, and the Aggies won the doubles point with victories on courts one and two. But the Illini battled back in singles play.

Toshiki Matsuya beat Jordi Arconada 6-3, 6-4 to even things up for the Illini. Jared Hiltzik picked up a win on court one over No. 65 Jeremy Efferding 6-3, 6-3, but Bazarnik lost in straight sets to A&M’s No. 89 AJ Catanzariti to leave the score tied 2-2.

The match came down to Aron Hiltzik and Vukic playing three sets with a chance to secure victory for the Illini. Aron defeated No. 48 Harrison Adams of the Aggies 6-4, 4-6, 6-4 and gave Vukic a chance to clinch the match — familiar territory for the freshman.

He clinched the Illini’s first match of the spring at Baylor in his first collegiate dual match. Vukic won a tight first set with A&M’s Arthur Rinderknech and then rallied in the third to win 7-5, 3-6, 6-3.

There was a lot of support from Illini alumni in Texas and Dancer expects it to continue as the Illini finish their trip on Monday — Illinois will face the No. 17 TCU Horned Frogs.

“We have a great group of family friends and alumni coming out to matches,” Dancer said. “It’s been awesome. We’ll have more in Fort Worth tomorrow.”