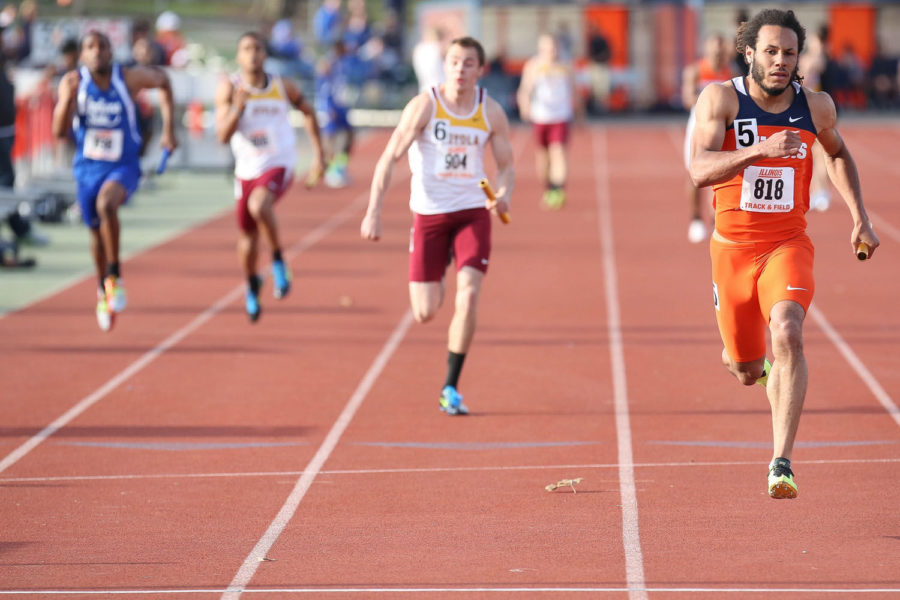 Illinois’ DJ Zahn, pictured in a meet from April 2014, was part of the 4×400 meter relay that finished with a time of 3 minutes and 6.58 seconds, the fourth-best time of the NCAA Indoor Championships over the weekend.

The Illinois men’s track and field team garnered five top-15 finishes and left with three first-team All-Americans at the NCAA Indoor Championships, where the Illini finished in 23rd.

“Although we fell just short of our program goal of a top-20 finish, we are pleased with 23rd place as a team,” head coach Mike Turk said.

The meet was held over the weekend in Fayetteville, Arkansas, where Oregon won its second-straight indoor crown.

The 4×400 meter relay was the Illini’s best finish. The team of senior DJ Zahn, sophomores David Kendziera and Kenneth Allen and junior Joe McAsey ran a time of 3 minutes and 6.58 seconds, the fourth-best time of the meet. This time broke an eight-year-old school record.

Turk was pleased with his team’s efforts after the meet.

Zahn also finished seventh in the 400 meters with a time of 46.69. He continued his impressive senior season after his record-breaking Big Ten meet, where he won three events. Zahn was awarded first-team All-American honors.

McAsey also competed in two events for the Illini. He finished 12th in the 800 meters with a time of 1:49.97, earning second-team All-American honors.

But it wasn’t just the runners who had a successful NCAA meet. The field events were also productive for Illinois.

Senior Davis Fraker threw a distance of 21.75 meters in the weight throw to finish eighth overall. For the second-straight NCAA meet, Fraker improved on his result from last season, when he finished 14th. Fraker was also awarded first-team All-American honors.

The only Illini freshman who competed this past weekend was Jonathan Wells. In the high jump, Wells cleared a height of 2.15 meters to finish in 13th place. Because Wells is just a freshman, this past weekend gave him some experience that should be beneficial for the rest of his career.

Outdoor season kicks off next weekend when Illinois travels to Las Vegas to compete in the UNLV Spring Invitational.

This season was the Illini’s best finish at the NCAA meet since 2012, when Andrew Riley propelled Illinois to a 13th-place finish.

Turk believes the indoor season was just the beginning for impressive things for his team.

“I’m pleased with the way these guys represented our program and the University,” Turk said. “It’s back to work now for the outdoor season. I think we have a chance to surpass what we accomplished indoors.”