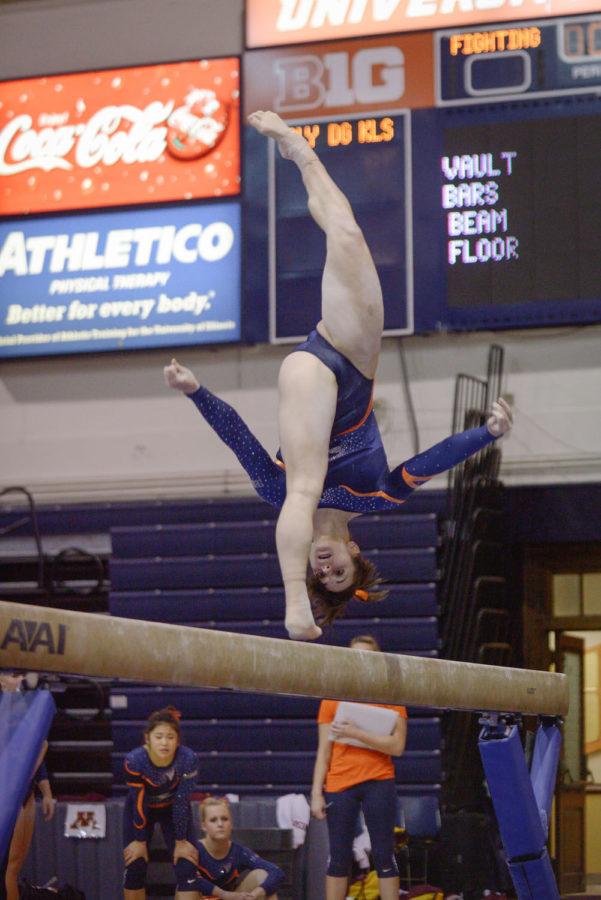 Illinois' Giana O'Connor performs a routine on the balance beam during the meet against Minnesota at Huff Hall on Saturday, February 7, 2015. The Illini won 195.775-195.375. O’Connor won the bars event title on Saturday with a score of 9.900.

“We definitely had awesome performances on all four events,” Horth said. “Whether the scores were there or not, we were definitely proud of how we did today and proud to come out on top.”

Illinois’ scored a 48.625 on floor, its lowest event total of the day on its final event, but still beat out Nebraska, despite the Huskers’ 49.350 final rotation on vault.

The Illini counted floor scores as high as 9.800 and as low as 9.675, but Horth was still pleased with the team’s floor routines.

“There were some little landing mistakes that we made,” Horth said. “But overall, we had great tumbling and great presentation, so we’re really happy with that.”

It was the Illini’s start that really put them in a position to win come the final rotation. Head coach Kim Landrus said her team’s strong start on vault, a 49.000, gave it momentum for the remainder of the competition. It also gave the Illini a first-place tie with Michigan State after the first rotation, but they grabbed the lead in the next rotation on bars.

Junior Giana O’Connor led the bars lineup with a 9.900 to win the event title. Sophomore Erin Buchanan added a career-best 9.875, while Horth, senior Sunny Kato and sophomore Sarah Lyons all earned a 9.850. In all, Illinois’ 49.325 on bars bested all other team scores on the apparatus.

“We always talk about how we need to convert those details that we do in practice — like sticks and handstands — in the competition,” O’Connor said.”Today, I know that we stuck a lot more dismounts and hit a lot more handstands than normal, so it’s really exciting.”

From there, the Illini headed to the balance beam before taking a bye and finishing on floor. Buchanan fell during her beam routine, but the rest of the gymnasts hit their routines to give Illinois a 49.100 event total.

“Not a lot fazed our team today,” Landrus said. “If there was a little bump in the road, the girls just walked right over it and stuck to what they knew how to do.”

Despite that, the Illini know they still have improvements to make.

“We had a couple of mistakes,” O’Connor said. “But it means that our score can potentially go up even more than what we had today, so that just builds our confidence.”