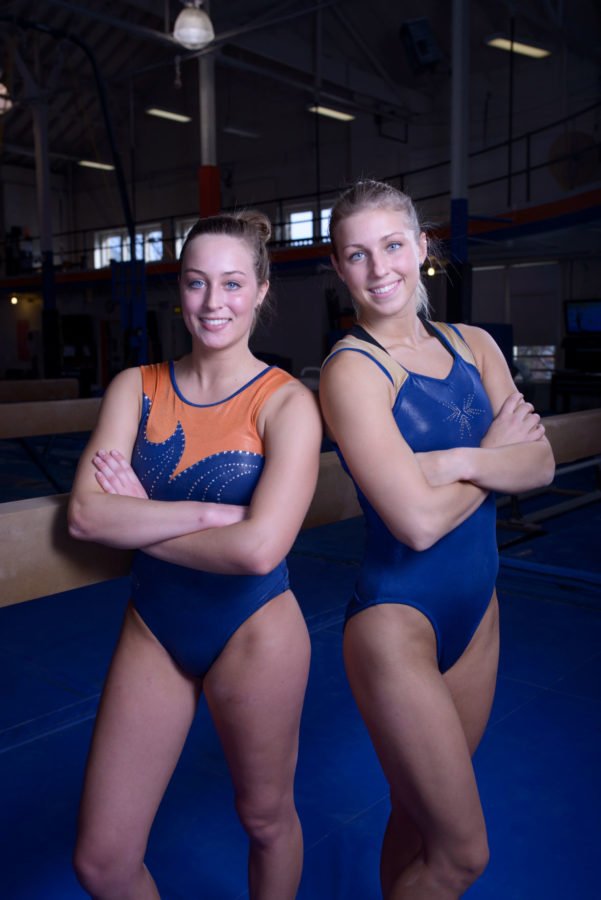 Heather Foley was in Chicago for her 18th birthday — Aug. 15, 2012 — and in a couple of days, she would head down to Champaign to begin her freshman year of college.

But that day ended up more than just a birthday.

Foley checked her phone: she had a text from Bridget Hodan that read, “I committed to Illinois!”

At that moment, Foley learned she would be reunited on the Illinois women’s gymnastics team with her childhood friend and teammate.

“I was so excited, so happy for her and just happy that we’d be teammates,” Foley said.

Foley, a junior, and Hodan, a freshman, grew up in Wisconsin and got their starts in gymnastics at Salto Gymnastics and Dance’s Salto West facility in Waukesha, Wisconsin. Foley even remembers the first day Hodan came to her TOPs (Talent Opportunity Program) group.

The two share many memories together, many of which come from their childhood, but they only trained together until 2008. That’s when Foley moved to M & M Gymnastics in New Berlin, Wisconsin, to try elite gymnastics — the highest level of the sport. Previously, Foley had competed in level 10 gymnastics.

“At Salto, it was just kind of hard, so we switched,” Foley said. “I was with all the older girls at Salto, so my mom wanted me to be with some girls that were more my age.”

At M&M, Foley did get to be with girls closer to her age. Coaches Andy and Jeanelle Memmel helped Foley train to become an elite gymnast. She tried it “for a little bit,” but suffered a stress fracture in her hip, forcing her to sit out for about three months.

At the same time, Foley experienced a six-inch growth spurt, bringing her to her current height, 5-foot-7. That combination of added height and a hiatus from the gym proved to be too much for her to even try elite again, so she decided to take a step back down to level 10 and prepare for college.

Part of that preparation for college involved Foley eventually returning to Salto for her senior year in 2012, reuniting her with Hodan. This time, though, Foley would take on a mentor role with Hodan.

“Just being able to be her role model really helped me, because it puts a strong place on your shoulders,” Foley said.

Another reason going back to Salto was great for Foley was the coaches.

One coach was Kristen Kremer, who worked with Foley and Hodan as kids when their main coach was absent. Her initial impressions of the pair was that they were “two little determined girls with a lot of natural talent for the sport.” She would go on to coach them again during their high school years.

Kremer was a gymnast at Florida from 2001-2004, and scored the first perfect 10 on balance beam in Florida’s program history. Foley, whose favorite event is beam, added that Kremer was particularly helpful because she gave Foley an idea of what it would be like to compete in college.

Foley’s other Salto coach, Jim Melcarek, was helpful because his daughter Krystal was an Illini gymnast from 2005-2008, so for him to have an idea of what Illinois was like was, in Foley’s words, “perfect.”

Illinois, however, wasn’t where Foley expected to end up. Despite being from Wisconsin, Foley said she disliked the cold and wanted go to somewhere warm, like Auburn or Georgia.

She only visited Illinois because head coach Kim Landrus was interested in her, but she ended up loving everything about Illinois.

While Foley was preparing for the NCAA with a return to Salto, Hodan was trying to decide where she’d go to college.

Hodan looked at the Big Ten a lot as well as some Pac-12 schools. When considering Illinois, Hodan thought it was “awesome” that her former teammate would be on the team, but she needed to pick a school for her own reasons, and Foley agreed.

In the end, Hodan liked Illinois’ academics, business school and gymnastics program, and chose to be an Illini.

Kremer said it’s great to see her former gymnasts make it to the NCAA, but the fact Foley and Hodan are together makes their experiences better.

“As a former collegiate gymnast, I know what an honor and experience it is to have an immediate ‘family’ when you arrive on campus,” Kremer said.

Foley is in her third season at Illinois, and has competed on the balance beam, uneven bars and vault in all meets so far this season. Landrus said, “she has really figured it out now that she’s a junior.”

Foley added that she focuses more on form and details, rather than just relying on her talent like she did before college.

Hodan has yet to compete in her first season. She was sidelined with a stress fracture in her left femur for 12 weeks, but on March 2, doctors cleared her to fully train on beam. Five days later, Hodan was back up on the beam performing an exhibition at the State of Illinois Classic in the NIU Convocation Center in DeKalb, Illinois.

At the time, freshman Jordyn Givens was recording Hodan’s exhibition on an iPad. The gymnast who records routines doesn’t typically cheer, but Given said she couldn’t help herself, because “it was an amazing routine.”

Givens called Hodan “a beautiful beam worker,” and she’s not the only one to do so — Foley, Kremer and Landrus have all raved about how Hodan performs on beam.

Hodan is unsure of what her role will be in the years to come, but she hopes to contribute however she can while being a great teammate. Foley, too, is excited for Hodan to fully recover from her injury, so she can finally compete alongside her childhood friend.