Illinois basketball travels to Alabama for the NIT 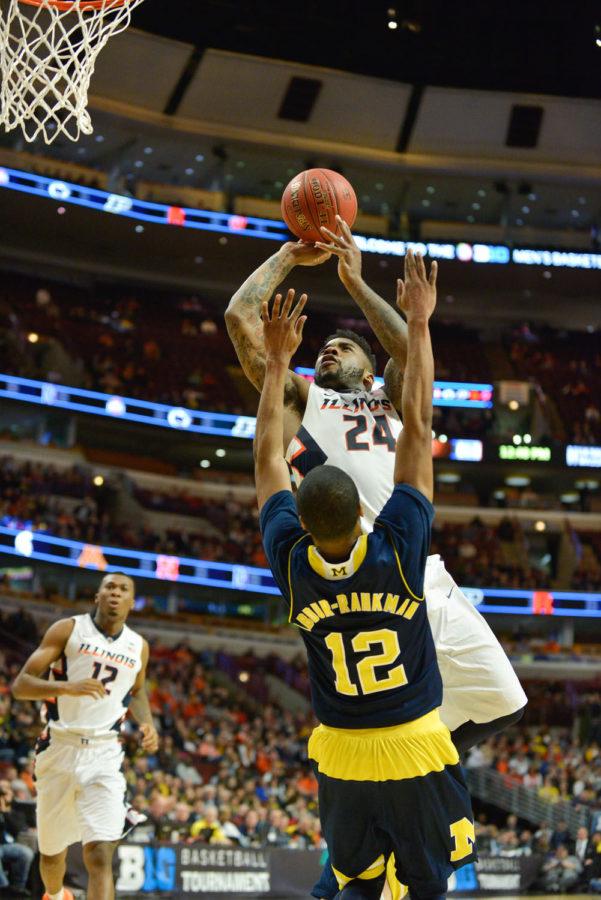 Illinois' Rayvonte Rice shoots the ball during the game against Michigan at United Center in Chicago, Illinois, during the Big Ten Tournament on Thursday. The Illini lost 73-55, sending them to the National Invitational Tournament for the second year in a row.

A crushing 18-point loss to Michigan in the first round of the Big Ten tournament on Thursday set Illinois up for deja vu, sealing the team’s second-straight trip to the National Invitational Tournament. As a consolation, the Illini will travel to Tuscaloosa, Alabama, to play Alabama on Tuesday night.

“It was a hard one to swallow,” senior guard Rayvonte Rice said. “We’re just looking to get past it.”

“We just have to do our best in that, I guess,” the sophomore guard mumbled, slouched forward in his locker room chair not long after the loss to Michigan.

Hill helped keep the team’s NCAA tournament hopes alive during Rice’s month-long absence with a broken left hand. Rice was the team’s leading scorer and rebounder at the time. The senior’s injury was then followed by a suspension from the team alongside guard Aaron Cosby.

Hill scored double-digits every game during that absence, leading Illinois to an upset over then-No. 11 Maryland and a 6-3 record. The guard averaged 17.7 points per game, shooting over 42 percent from the field and from 3-point range.

Illinois has made the NCAA tournament twice in the past six seasons. The Illini haven’t made it past the round of 32 since the program’s 2004-05 Final Four run to the championship game. Illinois’ best NIT performance was a third-place finish in 1980.

Even last year’s NIT run ended in the second round for Illinois. But the road continues to grow tougher for this year’s Illini.

With renovations to State Farm Center taking place over the offseason, Illinois must play all its NIT games on the road. The Illini are 2-8 on the road this season, not counting neutral-site games.

Alabama’s 13-5 at home this year. The Crimson Tide have dealt with troubles of their own. Head coach Anthony Grant was fired Sunday following an 18-14 season. The program announced assistant John Brannen as the team’s interim coach for the NIT. Brannen spent nine seasons as an assistant under Grant, including the past six at Alabama.

Illini shooters should control the game with Alabama’s defense allowing 66.7 points per game. On the offensive end, the Crimson Tide are led by senior guard Levi Randolph with 15.2 points per game and five rebounds per game.

If Illinois can defeat Alabama on Tuesday, the Illini are set up to play either a Miami team they already lost to on the road this season, or a North Carolina Central team that went undefeated in conference play and won its previous nine games before a loss in the Mid-Eastern Athletic Conference tournament semifinals.

But the Illini have learned to take the season one game at a time, following an unpredictable year that ended in a disappointing postseason placement Sunday afternoon.

“It was real tough,” senior center Nnanna Egwu said. “I think the (Alabama) game will be a big factor in making us forget.”