Where are they now: 2004-05 Illini basketball players and coaches 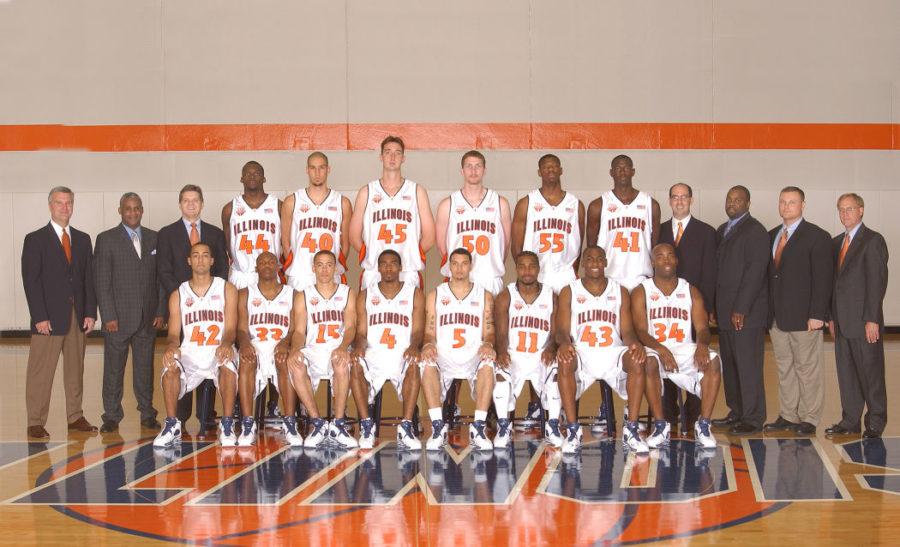 It has been an eventful 10 years since the 2004-05 Illinois men’s basketball team made it to the NCAA championship game. Much has changed at Illinois in those 10 years. But what have the players and coaches from that year’s team been up to since then?

Williams declared for the draft after the 2004-05 season and was selected third overall by the Utah Jazz. He played his first six seasons with the Jazz before being traded to the New Jersey (now the Brooklyn) Nets. Williams still plays for the Nets. He has had more NBA success than any other 2004-05 Illini. Over his career, he has amassed three NBA All-Star appearances and two All-NBA Second Team selections.

Head, like Williams was drafted into the NBA following the 2004-05 season. He was drafted by the Houston Rockets and has played for the Miami Heat, Indiana Pacers, and Sacramento Kings over the course of six NBA seasons. Head spent one season in the NBA’s Development League and currently plays professionally in Morocco.

Unlike his former teammates, Powell wasn’t drafted into the NBA, but he didn’t give up on his professional basketball dream. Powell played in the Continental Basketball Association during his first year out of college and tried out for and made the Utah Jazz roster the following season before heading to Europe to continue his professional career. After returning to the U.S., Powell found work as an assistant coach at Valparaiso, where he is currently in his fourth season.

Like Brown, Augustine also stayed in Champaign for his senior season in 2005-06. After the season, Augustine was drafted in the second round by the Orlando Magic and played in the NBA until 2008. Augustine continued his playing career in Europe and is currently playing for Khimki in Russia.

Ingram played his final year for Illinois in 2004-05. He never played professionally and currently lives in Indiana.

McBride was a sophomore during the Illini’s run to the NCAA Championship in 2005. He returned to the team for his junior and senior seasons before graduating with a degree in sports management. He is currently an assistant coach at the University of Illinois-Springfield.

After finishing his collegiate career at Illinois in 2007, Carter went undrafted and didn’t make an NBA roster. He bounced around Europe and is now playing for Aix Maurienne in France.

The tallest and winningest player in Illinois history now lives in Florida after finishing his Illinois career in 2005.

Pruitt finished his Illinois career in 2008. He played professional basketball in places like China, Greece and Puerto Rico before recently finishing his professional career and moving to Aurora, Illinois.

Nkemdi finished his Illinois career in 2005 and graduated with a degree in political science. He currently lives in California.

Randle, like Pruitt, finished his Illinois career in 2008 and also went undrafted. He has played professionally in Germany and with multiple teams in Israel. He is currently plays for Maccabi Tel Aviv in Israel.

After finishing his collegiate career in 2007, Arnold played professional basketball overseas. He currently lives in Chicago.

Following his Illinois career, Brock played professionally in Germany and Lithuania. He currently lives in Chicago.

McClain coached at Illinois until Weber’s departure in 2012 and traveled with Weber to be the director of student-athlete development at Kansas State. He moved back to Champaign after one year at Kansas State and became the head coach at Champaign Central. McClain passed away in October after contracting pneumonia during his battle with lung cancer.

Price was an assistant coach at the University until 2012 and has since become the Associate Director of Development for the University of Illinois’ business school. He is also the head girl’s basketball coach at St.Thomas More High School.

Webster has bounced around between coaching opportunities since leaving Illinois in 2007. He has been an assistant coach at Kentucky, the interim head coach at DePaul and an associate head coach at Tennessee.