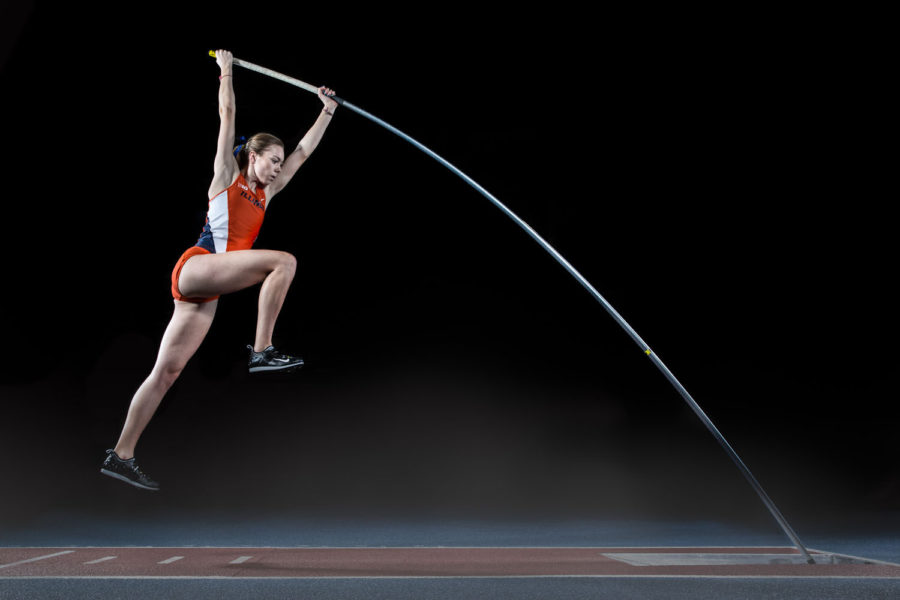 Senior Stephanie Richartz started as a walk on to the team freshman year and was recently named to the first team All-American for the second time in her career.

Coming to the University of Illinois, Illini pole vaulter Stephanie Richartz never thought her time in college would be spent pole vaulting, let alone being one of the best pole vaulters in the nation.

Richartz is coming off her second Big Ten Indoor championship in the pole vault and fourth overall including the outdoor season. She set the school record with a jump of 4.45 meters.

The mark earned her third-place honors at the NCAA Indoor Championships last weekend, as Richartz was named to the first team All-American for the second time in her career.

Richartz was not recruited out of Carmel Catholic High School in Mundelein, Ill. She instead walked on her freshman year in 2011. In fact, she started out her high school career as a gymnast.

“Gymnastics was kind of hard for me, as a relatively tall and slightly uncoordinated gymnast,” Richartz said. “I was OK at gymnastics, like the best on junior varsity, but not quite good enough to be on varsity. It was something that I really loved, something that was inevitably going to end at some point. It was really cool that track branched off of my career in gymnastics and gymnastics kind of gave me the skills that I needed to become a really good pole vaulter.”

Even as a walk-on, Richartz said she never imagined her career would turn out like it has.

She never dreamt of being a Big Ten champion; Her main goal, instead, was to be featured on the track and field poster.

“If you told my future self where I am now, four or five years ago, I probably would have laughed at you,” Richartz said. “My goal as a freshman was to make the travel squad and to one day be on the track and field poster. So those were my goals coming into the team my freshman year and they were both accomplished by the end of my freshman year and also so many things that I never even dreamed could be possible, so my expectations were completely blown out of the water.”

Track and field is something Richartz is glad she worked on because of all the great people she has encountered. The sport has become a large part of her life.

“I wasn’t even going to do track in college, but my high school coach encouraged me to and my mom emailed the coaches here and asked if I could come give it a try,” Richartz said. “Pretty much ever since my freshman season, it has completely transformed my life. Not only because of the success that I’ve had, but also because of the people that I’ve met, the teammates that I have and the coaches that I’ve encountered throughout my career.”

Richartz’s aspirations after Illinois may not have pole vaulting in the mix, but she pointed out that she will know after the outdoor season concludes if she’ll continue to train for post-collegiate pole vaulting.

Pole vault coach Bryan Carrel has coached for nine years at Illinois and said Richartz can compete post collegiately, but it may come at a price.

“There’s not a lot of money,” Carrel said. “But track and field, swimming and diving, all those sports; it’s more difficult to make a buck and be good and make a living and have a life as a professional athlete. I think Richartz could definitely compete on the national level; I still think she has a lot of potential.”

Richartz added that professional track and field is not like playing professional basketball or football. It’s a lot different and planning would have to be involved.

Richartz is also an engineering major, which has her consistently planning and keeps her busy. With a time-consuming major, Richartz had trouble balancing her studies and practice. Now, as a senior, she’s found the balance between the two after work done over the course of the offseason.

“There’s a saying that busy people are always busy and lazy people are always lazy, and I’m definitely a busy person,” Richartz said. “Every minute of my time from when I get up in the morning to when I go to sleep is planned and prepared for.”

Richartz said that sacrifices have been made in the process, including sleep and time with friends and family. Everything has ended up working for her, though, as she is now a fifth-year senior and is taking everything easier.

“I paid my dues,” Richartz said. “I’m taking it a little bit easier and enjoying the free time that I do have as graduation approaches.”