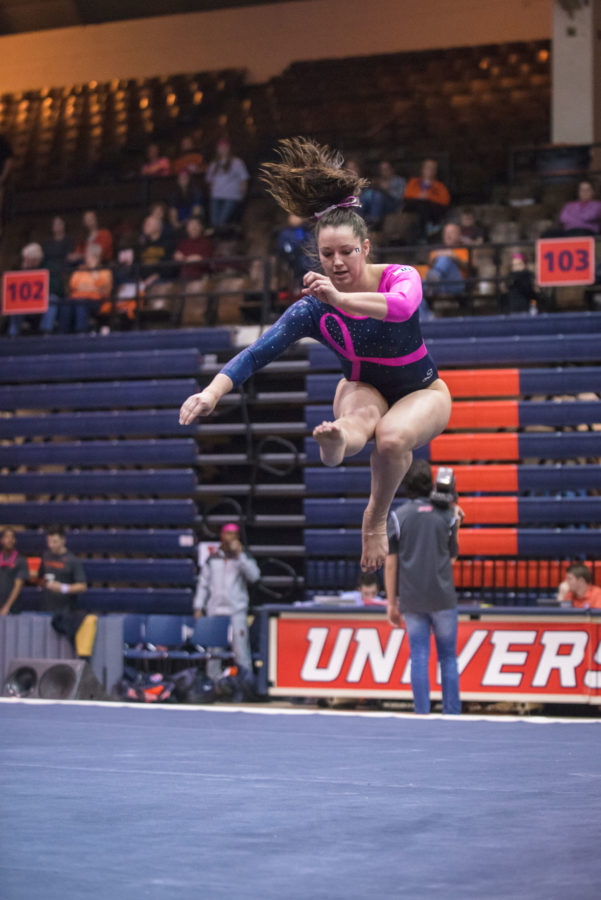 Illinois’ Kelsi Eberly performs a routine on the floor during the match against Penn State at Huff Hall on February 1.

The Illinois women’s gymnastics team has concluded its regular season and is set to begin its postseason with the Big Ten Championships on Saturday at the Crisler Center in Ann Arbor, Michigan. Coming off a first-place finish at the Big Five Meet last week, senior Kelsi Eberly knows her team is looking forward to entering the postseason.

“We’re ready to go,” Eberly said. “There’s definitely a lot of excitement going into Big Tens and at Big Tens, so we’re just going to keep building on that.”

No. 16 Illinois will compete in the evening session of Big Ten Championships with No. 6 Michigan, No. 19 Minnesota, No. 10 Nebraska, Ohio State and No. 11 Penn State.

The Illini faced all of those opponents in the regular season, only losing twice. Illinois’ first loss of the season came against Michigan on Jan. 25. The other loss occurred at the Masters Classic on March 1 in Nebraska, when the Illini lost to the Huskers. Despite that loss, Illinois defeated Nebraska last week at the Big Five Meet. The recent win gave the gymnasts confidence for Big Ten Championships.

“Just because Michigan and Nebraska are higher than us in rankings, we can do just as well as they can,” Eberly said. “That makes us excited to be with them and compete with them.”

Sophomore Sarah Lyons added that going up against what she called Illinois’ “toughest competitors” is a reason why the Illini look forward to competing in the evening session. All of Illinois’ Saturday opponents, except for Ohio State and Penn State, have gymnasts on the All-Big Ten first-team. The Illini have three gymnasts on the team: sophomore Mary Jane Horth, senior Sunny Kato and junior Giana O’Connor. That number is second-most in the conference behind Michigan, which has four.

Lyons also said Illinois’ goal for Saturday is to make the podium, which she thinks is realistic. But she also said that for the Illini to do so will involve more than just hitting all 24 of their routines, and Eberly agreed.

“As a whole, hitting to the best of our abilities,” Eberly said. “Not just going out there and hitting routines, but doing it the best that we can.”

Eberly and Lyons saw improvements in Illinois’ landings at the Big Five Meet, a detail the gymnasts have been continuously focusing on, but head coach Kim Landrus emphasized that focus must be carried into Saturday’s meet.

“We had some little things that were off here and there,” Landrus said. “We know that we’re going to have to continue to stick to the plan and make everything as precise as possible in order to be up there at the top of Big Ten.”