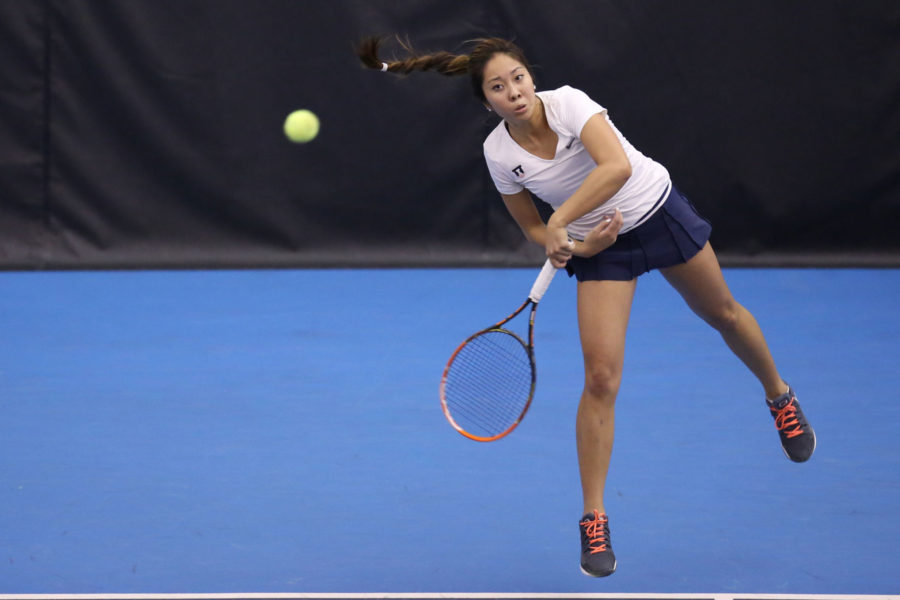 Illinois' Louise Kwong serves the ball during the match against Indiana at Atkins Tennis Center, on March. 1. The Illini won 6-1.

Despite historical trends not favoring the Illini, there’s lots of confidence within the Illinois women’s tennis program, which takes its recent success into Evanston, Ill., on Friday to face in-state rival Northwestern.

The Illini are coming off of a 4-3 victory over South Florida, which brought them to 7-4 on the season. Getting off to a hot start and picking up the doubles point were crucial for Illinois in its match against USF this past weekend in Tampa, Fla.

Last week, before their road trip, Illinois head coach Michelle Dasso emphasized doubles and starting off fast against USF as key to a win. While the Illini wish to start fast against Northwestern as well, getting into a rhythm has been the main focus for the Illini in practice this week.

“We’re focusing on execution right now and hitting a lot of balls to get in a rhythm,” sophomore Louise Kwong said. “Northwestern is not having a good season, so we know that if we play our game we will win.”

Kwong added that the team is confident after coming off of a win this past weekend outdoors and away from home. As a result, Kwong said, the players are not afraid to walk into Evanston and pick up a win.

Dasso stressed playing smart against Northwestern. With the Wildcats having a down year statistically — they are 5-4 overall — Dasso also feels that this is a Northwestern team that Illinois can beat. Last season, the Wildcats, ranked No. 8 in the country at the time, defeated the Illini 7-0 at Atkins Tennis Center.

“We just have to go out there and make (Northwestern) play,” Dasso said. “We don’t have to be flashy, just have to cut down on unforced errors.”

Along with the growing confidence of the Illini, the team expects to have some extra support against Northwestern to help lead it to a victory. With a majority of the Illinois women’s tennis players being from the Chicagoland area, the Illini anticipate a big crowd of family in friends to neutralize some of the Wildcats’ home-court advantage.

“This match means a lot to us, maybe more personally because we’re playing close to home,” sophomore Alexis Casati said. “A lot of our family will be there, so we are really excited.”

Casati felt that it was simply not the Illini’s day when they faced Northwestern last year, her freshman season. After seeing how the Wildcats matched up against teams Illinois has already faced this year — both teams beat Indiana and lost to Ohio State — Casati believes her team has a good shot at winning.

Despite her team’s confidence, Dasso has told her players this match won’t be easy for the Illini.

“Oh, they’ll be ready, they’ll be fired up for us,” Dasso said of Northwestern. “It’s a night match on their home court, and they had a 10-day break, so they’ll be rested and ready to go.”