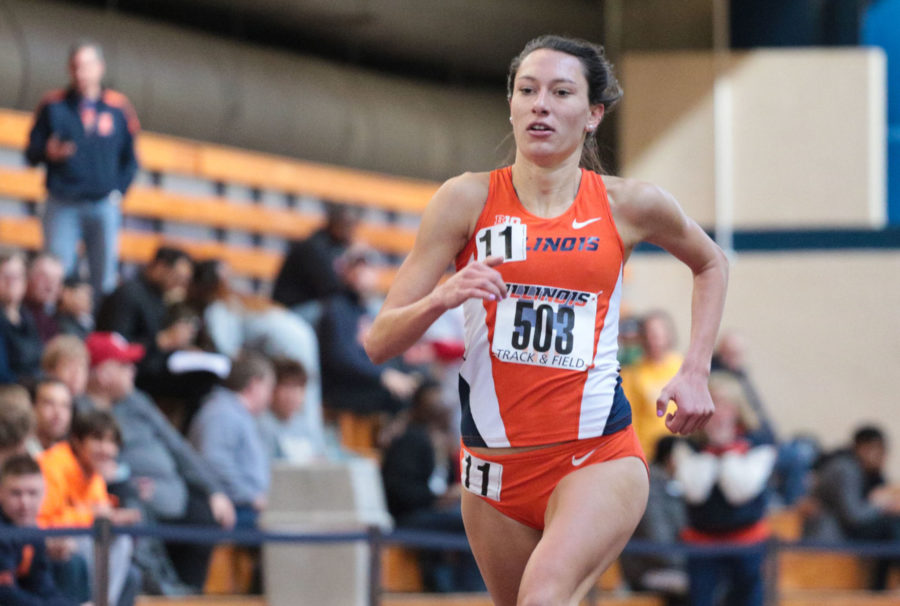 Illinois’ Hanna Winter (503) runs for the finish line during the 1 Mile Run event at the Orange & Blue meet at the Armory on Saturday, Feb. 21. Illinois’ women’s team won 1st place out of 5.

The Illinois women’s track and field team wrapped up its second outdoor event Saturday — the Vanderbilt Black and Gold Invitational in Nashville, Tenn. The meet wasn’t scored for teams, but the Illini captured five event titles and 10 top-10 performances.

Illinois dominated the 5,000 meters Friday — four Illini were the first runners to cross the finish line.

Schneider said she was not satisfied with her performance but is moving forward.

“I wasn’t happy with the time, but I am not discouraged by it,” she said. “I know I’ve put in some more intense weeks so I wasn’t too surprised when I felt more tired that I would have liked. I plan on just sticking to the training schedule that (distance coach Scott Jones) has planned for me and looking to next weekend.”

While some Illini will travel to Charleston, Ill. and compete at the EIU Big Blue Classic on Friday, Schneider will compete at the Stanford Invitational in Palo Alto, Calif. on Friday.

She will face off against major competition and hopes to hold her own in the process.

“I will be running the 5K at the Stanford Invitational next weekend,” Schneider said. “I am aiming to come away with a PR and the opportunity to test myself against high-level competition.”

No ranked teams competed this weekend and Ilinois was the lone Big Ten team in Nashville.

DeBellis outlasted teammate Stephanie Richartz by 15-hundreths of a meter to claim first place and caught the eye of head coach Ron Garner.

“DeBellis is doing a really good job making some changes that she and Coach Carrel are working on,” Garner said in a press release. “I think she is really close to hitting a big mark.”

The meet was Wallace-Sipp’s second outdoor event of the season and her first top-10 finish and first win. Senior Mariah Smith came in second, losing to Wallace-Sipp by five feet.

“Wallace-Sipp and Smith have been working hard on some technical changes since last year,” Garner said. “Wallace-Sipp had a really good series of throws from start to finish. Smith struggled a bit early, but made some corrections in the end to make it a productive day.”

Senior Amanda Duvendack won in the 800 meters, beating Missouri junior Liz Reida by one tenth of a second. Senior Chloe Schmidt earned top-10 honors as well, placing eighth out of the 53 runners that finished.