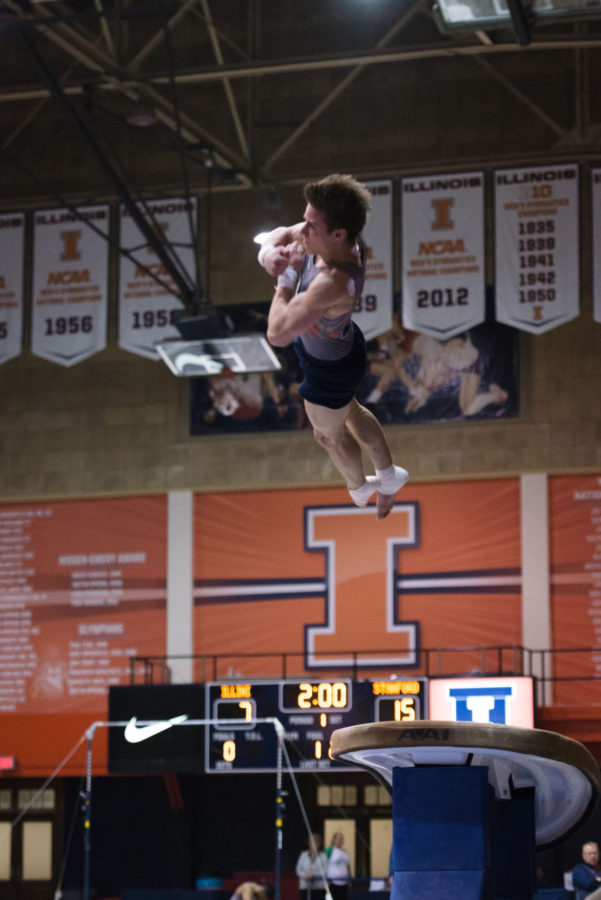 Illinois’ Bobby Baker launches off the vault during the meet against Stanford at Huff Hall on Friday, March 6. The Illini lost 21-9.

Three individual event title wins for the Illinois men’s gymnastics team helped relieve the sting of finishing in second place (436.700-436.100) behind Penn State in the team finals at the Big Ten Championships at State College, Pennsylvania, over the weekend.

During team finals on Friday, senior Jordan Valdez got the Illini off to a good start on the team’s first event — the high bar — posting a score of 15.150. His score was the best of the night and qualified him to compete the next day for an individual title.

Baker ended the first night with an all-around score of 87.100 — one-tenth of point shy of the top spot.

“It gave me relief knowing that I could bring back a title for myself and Illinois after coming so close to winning the team title,” Maestas said.

While he didn’t win any event titles, freshman Bobby Baker was awarded Big Ten Gymnast of the Year and Big Ten Freshman of the Year. The last Illinois freshman to win both awards in the same season was Maestas in 2012.

This season, Baker also collected six freshman of the week and two gymnast of the week honors.

“It was very nice to get recognized and be able to say that my hard work paid off in a way,” Baker said. “The whole feeling of what happened still hasn’t totally sunk in yet because it was definitely a bittersweet weekend.”

Along with Baker, Wilner, Foster and Peters competed for individual titles but came up short.

Peters and Wilner came in second and third on still rings, respectively. Foster finished second on the pommel horse event — his score of 15.075 ranked first until the last competitor on the apparatus, Minnesota senior Ellis Mannon, posted a 15.525 to win the title.

Baker, Hartville, Maestas and Valdez were named to the All-Big Ten first team. Foster, Wilner and Peters were given second team honors.

The next competition for the Illini is the NCAA Championship in Norman, Oklahoma — host Oklahoma ranks No. 1 in the country. Head coach Justin Spring said that lineups will be very similar to this weekend.

Spring said that the results of the Big Ten Championship will help motivate the team for nationals.

“The individual accolades were a great finish to a good weekend, but I don’t think they softened the blow of a tough second place finish,” Spring said. “It was a strong team effort with some great performances, but I think everyone was pretty disappointed having come so close.”