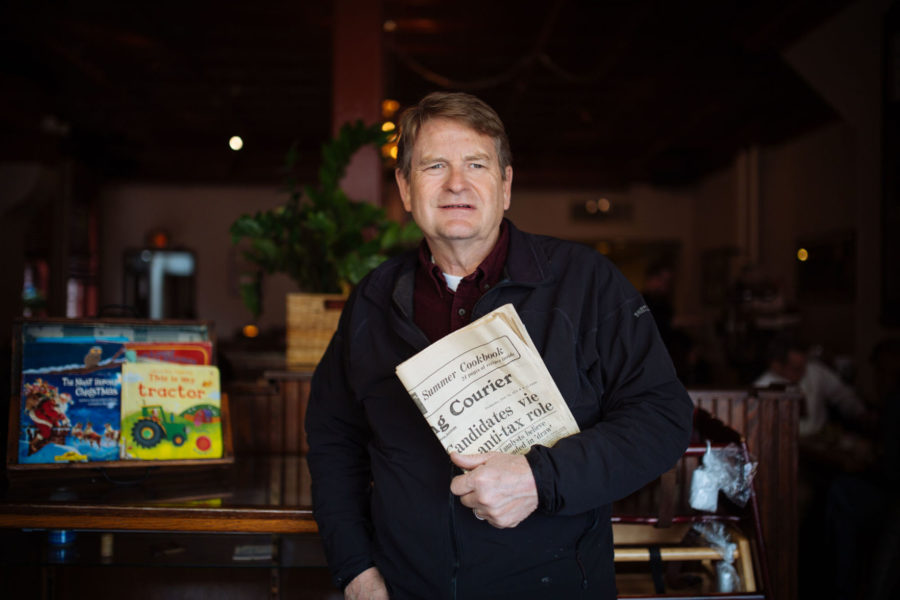 Allen Strong, the owner of The Courier Cafe, is holding the old newspapers in the cafe at March 20.

In a small, corner cafe, Pullman railroad berth lights illuminate the booths, a large pendulum clock keeps time on a far wall, a gold Palace Opera House chandelier shines above the dining room and a red airplane with a propeller that acts as a fan for the main dining room hangs above customers’ heads.

In downtown Urbana, one institution sits on the foundation of another: The Courier Café at 111 N. Race St. in the old Urbana Courier Newspaper building. The restaurant has been serving breakfast, lunch and dinner seven days a week for 35 years.

“When I opened the restaurant people said, ‘You’re crazy, you’ll never make it there,’” said Allen Strong, the café’s owner. He said Urbana was a ghost town when he decided to purchase and renovate the Courier building after the paper’s closure in 1979.

The Courier was still in publication when Strong came down from Chicago to open Bubby and Zadie’s, a Champaign deli on Sixth and Green that was open as late as 4 a.m. and would host live music acts.

But after five years of dealing with fluctuating business and a flooding basement, Strong said he was a ready for a change.

“I thought Urbana was poised for a renaissance,” he said. The Courier Café opened in November 1980 and sales grew every month for 17 years, according to Strong.

Many of the customers who came in were old newspaper employees who appreciated seeing their old newsroom put to good use, said Susan Fox, the Courier Café’s manager from 1982 until 2012.

“I think people always appreciate historical sites being preserved, and I think Allen did a nice job incorporating the history into his menu and the Courier Café. It just kept the memory alive,” she said.

Strong said he used to receive the Courier and has fond memories of the paper as well. It was a career starter for Roger Ebert, who would come and eat at the café.

According to Strong, the Courier always had the worst equipment but better writers and was the “spiritual focus of Champaign-Urbana.”

An old Courier delivery bag is on display in a case at the front of the café, along with numerous antiques which decorate the interior.

He can switch the airplane on from his favorite booth between the two dining rooms, where he has watched generations of families grow up throughout the years.

“I think it just feels like home,” he said.

He added that there was no secret to the café’s longevity, except that they make it a mission to serve good food.

Fresh bread is baked daily, and the soups and sausage gravy are made from scratch. Customers would get upset when changes were made to the menu, so the food preparation has been kept the same, he said.

“We never even advertise or wave a flag about it, that’s just the way we do it,” he said.

Fred and Sharon Gerth visit the restaurant every Friday for lunch and every Saturday for breakfast.

Regulars like the Gerths are what kept the business afloat during rough times, Fox said.

“Some of the wait staff have been around long enough that we know them by name and they know us,” Sharon said.

They have been coming to the café since just after it opened, and they said they appreciate the quality and consistency.

“Their salad bar, I think, is the best in town,” she said. Fred said he was indulging in a whole salad and sandwich rather than his usual half.

Buying a newspaper and eating lunch at the Courier is “part of our routine,” he said.

New faces and regulars visit the Courier, where a sign over the salad bar reads, “tourists treated the same as home folks.” One University recruiter, a regular known only as “green-tea guy” holds his meetings at the restaurant.

“We have become sort of woven into the heart of the community,” Strong said.