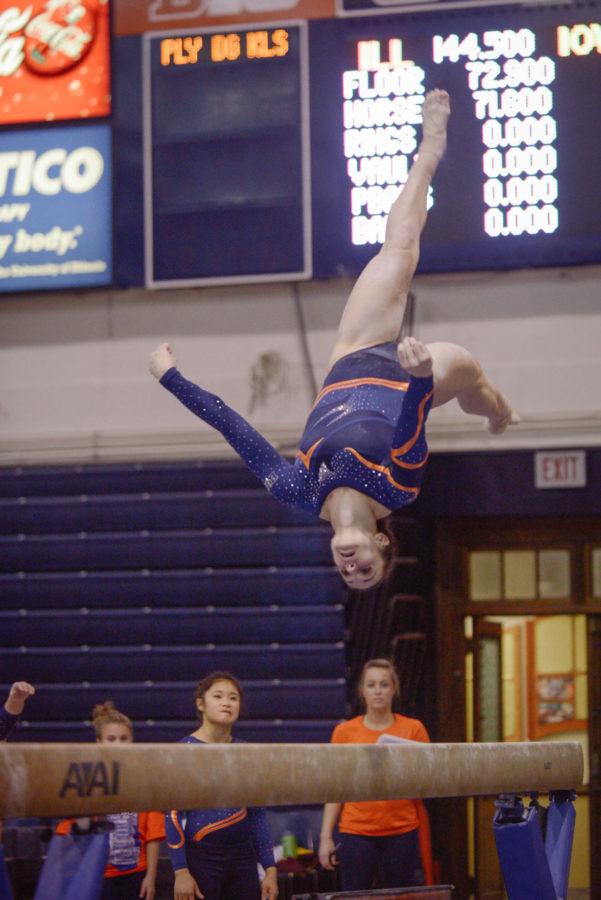 Illinois’ Giana O’Connor performs a routine on the balance beam during the meet against Minnesota at Huff Hall on Saturday, Feb. 7. The Illini won 195.775-195.375.

The No. 14 Illinois women’s gymnastics team has worked toward the goal of making a third-straight trip to nationals all season long, and the gymnasts can finally make that goal a reality at Saturday’s NCAA Regionals.

On March 23, the Illini were selected to compete in the Morgantown Regional at the WVU Coliseum in Morgantown, West Virginia, as a No. 3 seed.

Illinois will face reigning co-national champion No. 2 Florida, No. 11 Stanford, No. 19 Arkansas, No. 25 New Hampshire and West Virginia. To advance to Nationals, the Illini must finish in the top two. Despite being the No. 3 seed, head coach Kim Landrus is confident her team has what it takes to earn a berth to Nationals.

Two years ago, the 2013 Illinois women’s gymnastics team was in a very similar position. The Illini came into the Morgantown Regional as a No. 3 seed but were able to defeat No. 2-seeded Nebraska to earn a trip to Nationals.

O’Connor, who competed at the regional in 2013, still remembers the meet and “the amazing feeling” that came with it. She called it “one of the most exciting and memorable meets” she has experienced in her collegiate career.

Landrus added that the familiarity with Morgantown is great. Illinois’ juniors and seniors were the only ones who competed at the regional in 2013, but sophomores Erin Buchanan and Mary Jane Horth were in attendance as high school seniors. The duo cheered on their future teammates from the crowd, so they still got an idea of what the atmosphere was like there.

To prepare for Regionals, Illinois used last week’s off-week to get a feel of how the competition will be run. On Thursday, they had a practice day similar to the one at Regionals. On Friday, the Illini staged a mock regional meet, starting out on the balance beam and taking the necessary byes in between rotations.

This week, the gymnasts did team events, going through each lineup.

O’Connor mentioned that these special practices have prepared her team mentally and physically on what to expect at Regionals. What has boosted Illinois’ confidence even more, though, is its second-place finish at Big Ten Championships on March 21.

The Illini not only finished in second place at the conference meet, but their 197.350 score set a new program record for the top team total.

“We knew that we could do that all season long.” Horth said of the record score. “It was just a matter of putting it all together at one meet, and now, having that confidence and that experience at Big Tens under our belt, we know that we can go to Regionals and do that same thing.”