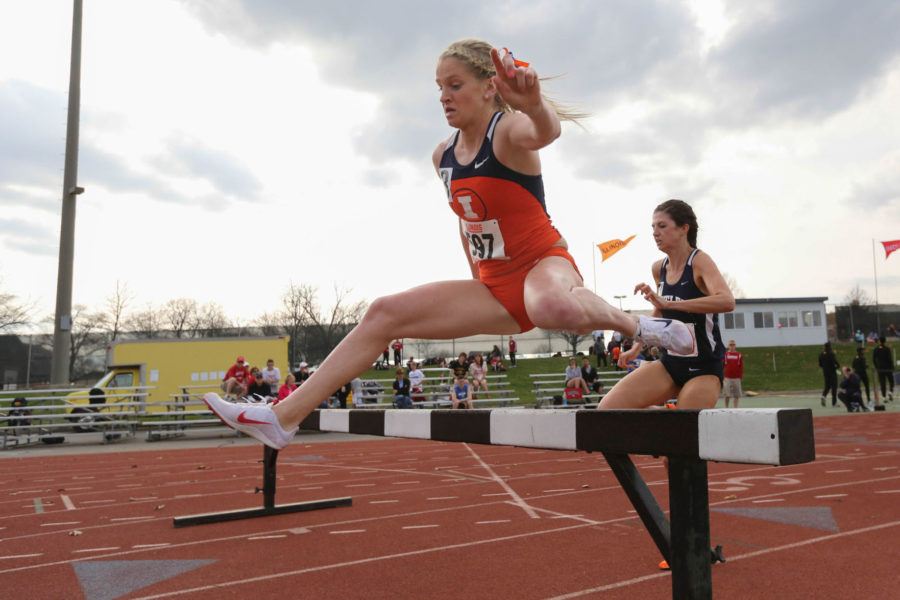 The Illinois women’s track and field team traveled to Charleston, Illinois, over the weekend to compete in its first EIU Big Blue Classic in three years.

Illinois’ 96.50 points were good for fourth at the three-day meet. The Illini placed behind Eastern Illinois, Indiana State and Southern Illinois, respectively.

Friday did not go well for the Illini, who finished the day in eighth out of 13 teams heading into the meet’s final day.

But a bright spot from Friday was the performance by the 4×800 meter relay team of freshman Nicole Choquette, junior Lindsey Rakosnik and seniors Amanda Duvendack and Chloe Schmidt.

The Illini quartet won the event with a time of 8 minutes and 52 seconds — setting a EIU Big Blue Classic meet record. The mark beat host Eastern Illinois’ relay team by 17 seconds, which is the second best time in Illinois history.

“As a group, our overall goal is to break the school record,” Rakosnik said. “With the conditions we were unable to this weekend, but it was good practice for our next opportunity at Drake. We are a tough group of girls with the ability to get it in a few weeks if we continue consistent training, but it’s exciting to have our names on the wall and is a motivator to keep working hard.”

The second day turned out to be a better team performance for the Illini, who jumped four spots to finish fourth out of 10 teams and scored in eight events.

Junior Britten Petrey was the lone winner of the day, earning top honors in the 3,000 meter steeplechase. Petrey finished with a time of 10:33, edging Marquette’s Kellie Greenwood by six-tenths of a second.

While the result was a confidence boost for Petrey, she considered it a minor step to a much bigger goal.

“I am staying patient and working for what comes in May,” Petrey said. “These next races are going to be great stepping stones for where I want to be in May.”

While most of the team competed at the Big Blue Classic, senior Alyssa Schneider competed in Palo Alto, California, at the Stanford Invitational instead.

The meet was dedicated to one event — the 5,000 meter run — with the nation’s top 19 runners in the event participating.

Schneider, who was the only Big Ten runner to compete, finished 14th with a time of 16:13.

That time set a personal record for Schneider and ranks second on the Illinois all-time list in the event, trailing Angela Bizzarri’s time of 15:33 that she ran in 2010.

“It’s always exciting to walk away from a race knowing that’s the fastest you’ve ever ran it,” Schneider said. “That’s a great feeling. Now that I have a longer distance race completed, I’ll be focusing on doing some shorter length races and continuing to prepare for the bigger races towards the end of our season.”