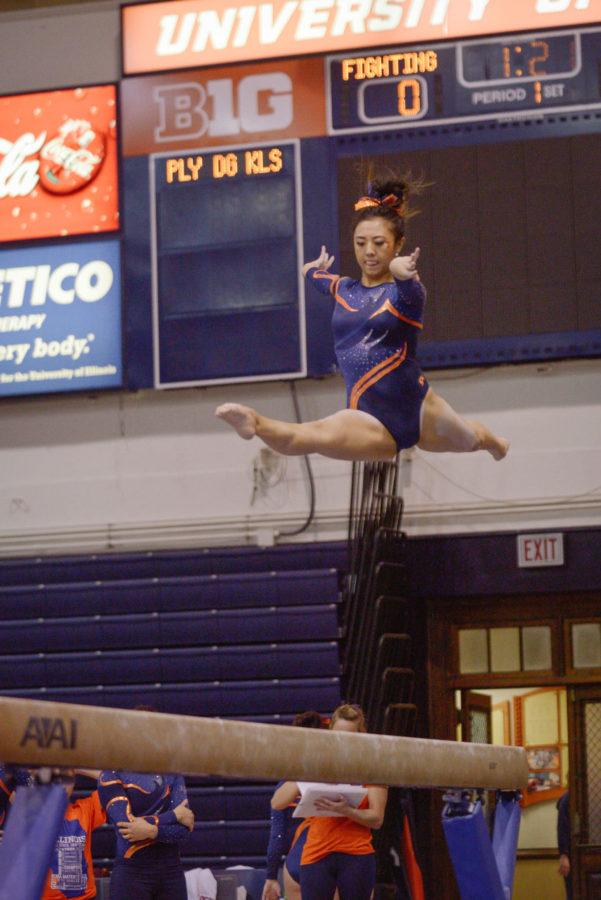 The Illinois women’s gymnastics team had been working toward one goal all season: a third-straight trip to NCAA Nationals.

All Illinois had to do to make that dream a reality was finish in the top two at the Morgantown Regional on Saturday night. The Illini walked into the WVU Coliseum in Morgantown, West Virginia, as the No. 3 seed, but that didn’t deter them — Illinois earned a trip to Nationals in 2013 as a No. 3 seed at the very same Morgantown Regional.

Despite trailing heading into the last rotation, there was still hope Illinois could finish second.

Florida, the top seed, was on a bye during the final rotation, but comfortably sat in first with a 197.475. West Virginia was also done, but its 195.650 was a score both Illinois and Stanford could realistically top. It was just a matter of which team would do so.

Stanford had a slight advantage over Illinois heading into the sixth rotation, leading 147.625-147.475. But for the Illini, ending on uneven bars meant finishing on one of their best events.

“We knew it was a close call, but we just went in there like any other normal rotation,” sophomore Mary Jane Horth said. “Just like any other meet, just doing those bar routines we knew how to do, just focusing on our team and focusing on the details.”

“Stanford showed up and did their job, and it was just a little short on the score,” senior Sunny Kato said. “We gave just a little too much away.”

The Illini did well throughout the meet. They started strong on the balance beam with a 49.250 before posting a 49.125 on floor and a 49.100 on vault. Then came the ending on bars. It led to Illinois’ second-best Regional score.

“They put their heart into it and gave it everything they could,” head coach Kim Landrus said of her team.”They should be feeling good about their accomplishments, not only today, but for the season as well.”

The team may have failed to qualify to Nationals, but Illinois won’t go unrepresented in Fort Worth, Texas in two weeks.

All-arounders Horth and junior Giana O’Connor qualified to compete at Nationals for being the top-two all-around finishers who did not qualify with their team. Kato shared the title of co-uneven bars regional champion with Florida’s Bridget Sloan, both qualifying to compete in  Nationals.

Kato admitted practice will be difficult now, knowing only Horth and O’Connor will be the teammates accompanying her in the gym, but she knows that at least having them there will help her get through it.

“If it was just myself, I don’t even know if I would want to go to practice,” Kato said. “Having them by my side and working out with them, I know we’re going to represent our school and show the world what it means to be a Fighting Illini.”