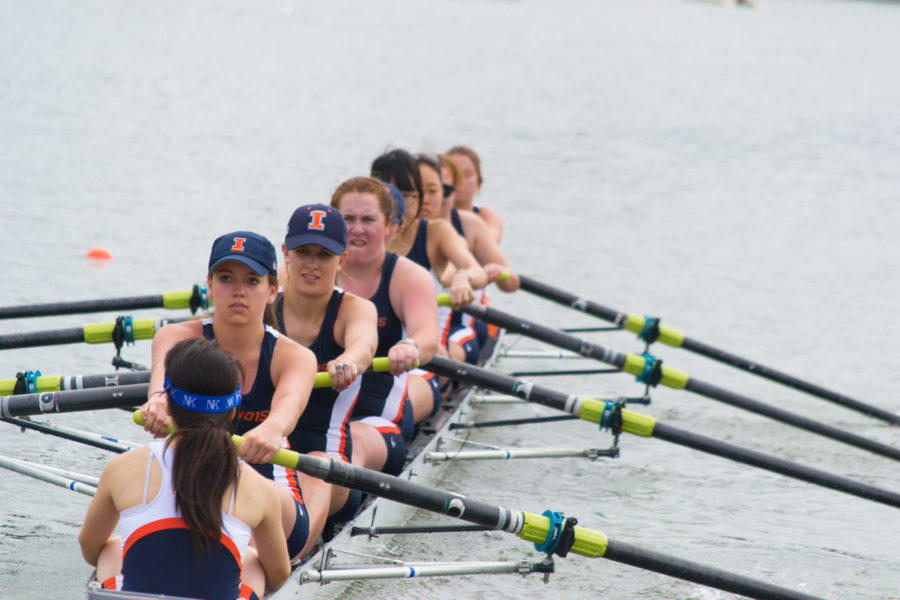 Women’s Novice 8+ rowing on Lake Lanier in Georgia over spring break in March 2014.

The Illinois Collegiate Rowing Invite is just over a week away, April 18. To prepare, the Illinois women’s club will compete in Don Lubber’s Cup in Grand Rapids, Michigan, this weekend.

The Illini will face different opponents in each of their multiple dual-style races — two on Saturday and one on Sunday.

“It’s a chance for us to get a lot of race experience and know what to expect in the race,” senior club president Meridith Kisting said, “You (realize) what you need to do to stay focused (throughout the weekend) and you (come to understand) how your body feels at various points during each race.”

While practice is usually held at Homer Lake, approximately 12 miles southeast of campus in Ogden, Illinois, the team has only recently been able to get back on the water because the lake was still frozen. But that doesn’t mean that the team doesn’t practice. All throughout the winter, the team has a prescribed training schedule and uses the indoor rowing machines at the ARC to continue honing their skills.

“It’s a huge relief when you get back on the water,” Kisting said, “There’s a lot more to consider. Winter conditioning prepares us for spring, but you never know what’s going to happen until you get back out (there).”

One challenge that the team faces in Grand Rapids is that the race course — on Spring Lake — will be very exposed and can experience high winds. Due to the fact that Homer Lake is sheltered from the wind, rowing in these conditions isn’t one of the team’s strong suits — they don’t often get to practice in high winds.

However, during spring training, when the team went to Gainesville, Georgia, the rowers were exposed to more adverse weather conditions, enabling them to become more familiar with how the weather could affect their races.

Illinois will compete against club teams from Cincinnati, Purdue, Northwestern and Grand Valley State; and Division I varsity teams from Robert Morris, Eastern Michigan and Drake.

“Every race is an opportunity to get better,” coach Erik Kroeker said, “It’s an opportunity to test yourself against other crews and weather conditions. This weekend is a big test because we’re competing against top-notch schools. Some of the best teams across the country for women’s rowing will be there. It certainly will be a good tune-up. All of these programs we have either struggled to beat in the past or have yet to beat, so it’s definitely our objective to win.”