Tennis hits the road on a hot streak 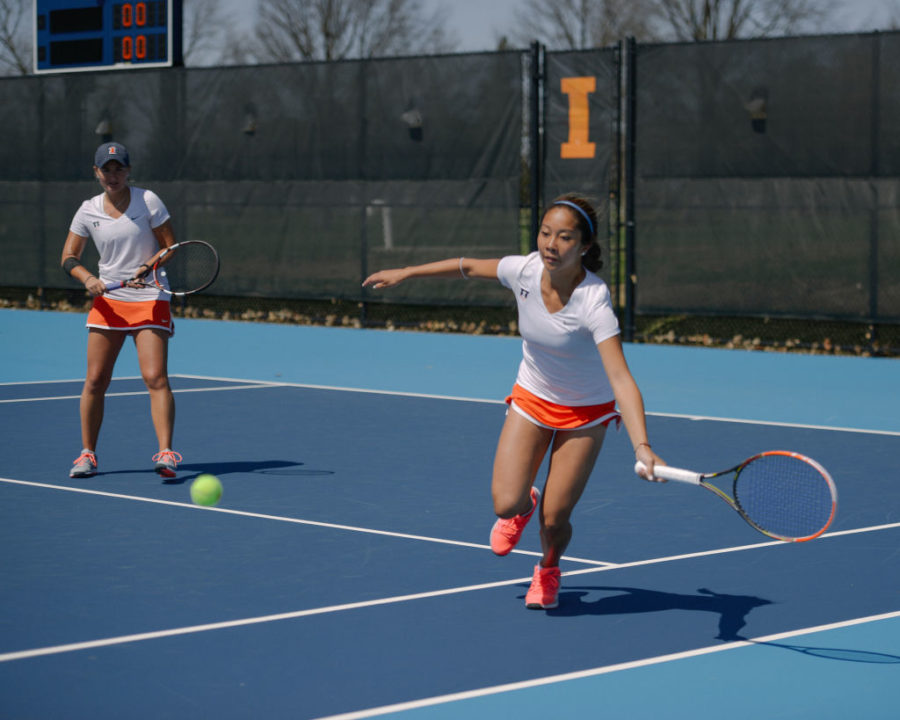 Illinois' Louise Kwong runs to the ball to make a return during the game against Maryland on Saturday, April 4.

The Illinois women’s tennis team has had an up-and-down season with a 10-9 record, but don’t tell the players that.

The Illini are as confident as ever as they head out of town this weekend. The last time the team hit the road they lost five straight. The difference now is that Illinois is on a three-game win streak.

Illinois head coach Michelle Dasso said she believes her players have put the losses behind them and are eager to make a statement against Wisconsin on Friday (10-7, 4-3 conference) and Minnesota (15-6, 5-2 conference) on Sunday.

“We are done with the nerves,” Dasso said. “We are excited to prove a point on the road this weekend.”

The inconsistent season has made the identity of this Illini team unclear. Impressive wins at home against teams like Indiana and Long Beach State have been overshadowed by several bad losses on the road.

Dasso is confident her team’s identity will be made clear by the season’s end. After the upcoming two road matches, Illinois will return home for two matches against Nebraska and Iowa.

“I think we are showing glimpses of our identity with these past wins by bouncing back, staying together and playing more poised in our matches,” Dasso said.

The team has stuck with individual workouts this week as opposed to team practices due to the success that the change brought when implemented last week.

Senior Melissa Kopinski likes the switch-up and has noticed that the changes, especially winning, have led to an increase of swagger on the part of the players.

“The team is definitely walking with a bounce in their step after this weekend,” Kopinski said. “But everyone knows it’s only a start and we need to continue focusing throughout the next several matches.”

Kopinski credits the attitude of her teammates, in addition to the changes in practice routines, as a reason why the team has been able to find success recently.

Despite facing a lot of adversity this season with injuries and a lack of confidence at times, she said the team has done a great job with zeroing in on the positives and moving forward.

“There’s still plenty of time to make a dent in the rankings,” Kopinski said. “We just have to keep fighting.”

Sophomore Louise Kwong has also noticed higher spirits around the team. The Canada-native believes confidence is continuing to build and grows larger after every win.

At the same time, motivation for the Illini also grows larger with every loss the team suffers.

“We’ve had a lot of struggles this season, however we like to keep a positive attitude,” Kwong said. “We’re fighters, we’ve been working hard, and everything that has happened in the past we’re just trying to use as motivation.”

Dasso and Kopinski both used the term “feisty” to describe Wisconsin and Minnesota, and a win against either team is not expected to come easily.

Another term that is repeatedly used around the team is “hungry.” While the Illini players don’t dwell on the past, they certainly use their losses — along with their wins to drive them toward a better future.

“There will always be nerves,” Kopinski said in contrast to Dasso’s earlier comment. “But it is the last weekend on the road in the regular season and the girls are hungry for some road wins.”