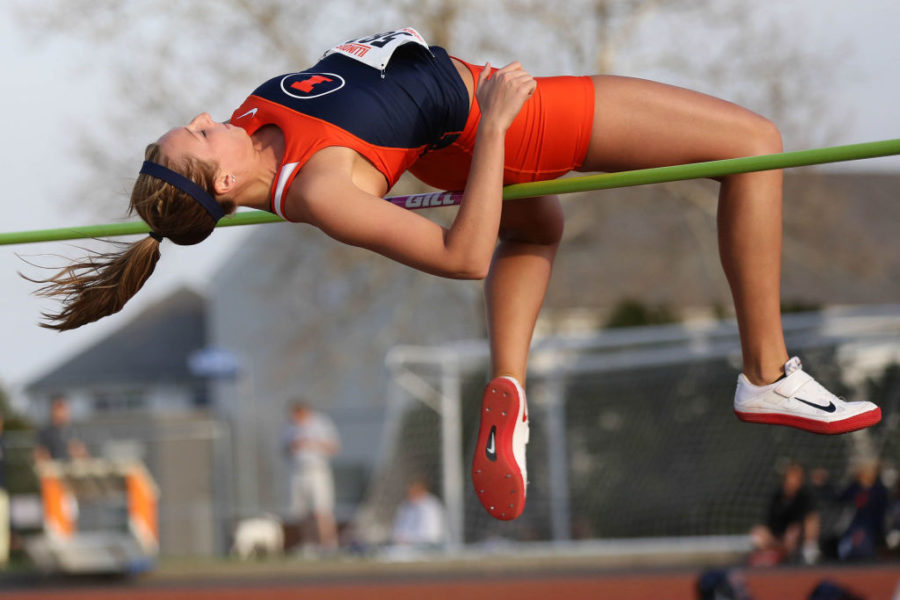 Illinois’ Kandie Bloch-Jones hits the bar in the high jump event during the Illinois Twilight Track and Field meet at Illinois Soccer and Track Stadium, on Saturday, April 12, 2014.

With the Big Ten Outdoor Championships just one month away, the Illinois women’s track and field team won three event titles at the Jim Click Shootout on Saturday in Tucson, Arizona.

Overall, Illinois finished with a total of 79 points to finish last in a field of five teams, six points behind fourth-place Purdue.

Even though Illinois finished in last place, head coach Ron Garner was satisfied with the results.

“This was a good meet in a lot of different ways,” Garner said in a press release. “There were some quality teams and the format was a bit of a different setup, but I thought we competed very well. The sun and the heat definitely factored into the performances, but part of competing in a meet like this is learning to stay composed under different circumstances. I thought we did an excellent job of staying composed and competing.”

One runner that stayed composed was Petrey, as she beat out four runners — two from LSU and two from Arizona — to capture the title.

After collecting her second-consecutive 3000 steeplechase title, Petrey said her confidence has remained consistent and is looking forward for what is to come in the further weeks ahead.

Richartz, the Big Ten’s indoor pole vault champion, catapulted her way to her first pole vault title of the outdoor season with a mark of 4.10 meters, defeating Arizona’s Savannah Whitehead and Illinois’s junior Jennifer DeBellis, who tied for second with vaults of 3.80 meters.

“Track and field is a long season between indoor and outdoor so there is a strategy to how you approach the season,” Richartz said. “The first couple meets outdoors I was just taking it easy. Now (I’m) beginning to pick up intensity which will prepare me for the more important competitions later in the season.”

The third event winner, Bloch-Jones, beat out LSU’s Briana Kelly and Shanice Hall and Shakayla McEaddy by five-tenths of a meter.

“Petrey, Richartz and Bloch-Jones each won with good efforts,” Garner said in a press release. “Petrey wasn’t too far off her personal-best despite the heat and a different track layout.”