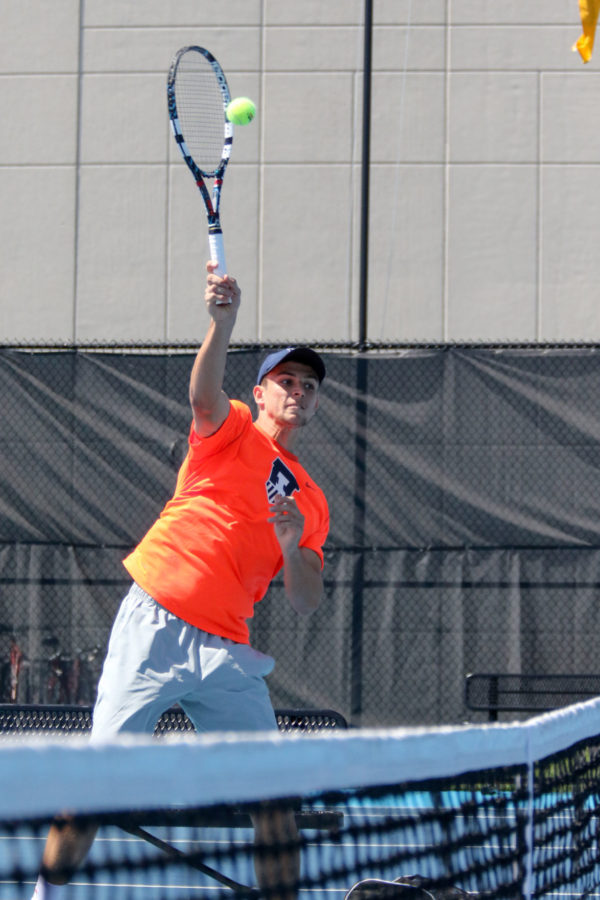 Senior Blake Bazarnik picked up the clinching win for the Illinois men’s tennis team on Sunday’s Senior Day and could be a big part of the Illini’s postseason plans. While Bazarnik did not play at all in the fall and has not played every match for the Illini this spring, he has been back in the lineup for all four matches of the past two weekends. Bazarnik is 3-1 over that span in singles and 1-0 in doubles.

Bazarnik played in all three of Illinois’ matches on its Texas trip — the toughest stretch of the spring slate. He also played in the Illini’s loss to then-No. 4 Georgia at Indoor Team Nationals on Feb. 14.

Before that tournament, head coach Brad Dancer spoke about the importance of his team’s depth. He said he felt that the Illini have several guys who can fill out the lineup, especially if someone is not performing well. Bazarnik has played in some of the Illini’s most important, tournament-like atmospheres of the spring. He could provide veteran experience in the postseason for a team that gets a lot of production from three freshmen.

While Sunday was dedicated to the seniors, freshman No. 49 Aleks Vukic put together the most impressive performance of the day. With senior partner Farris Gosea, Vukic won his doubles match 8-0 against Nebraska’s Chris Hobgarski and Andrew Dzulynsky. In singles, Vukic was dominant, beating Hobgarski 6-0, 6-0. He also picked up wins in singles and doubles against Iowa on Sunday.

He’s now 16-1 on the spring season. Vukic had arguably the best fall season of any Illini, and has delivered on the promise he showed then. In just his first-ever dual match, Vukic clinched the match for the Illini against then-No. 6 Baylor.

On Sunday, he pressured Hobgarski the entire match. In the final game of the match, he came back from a 40-0 deficit to finish off Hobgarski. He was the first Illini to finish in singles, ending his match nearly half an hour before any other singles match.

The Illini are perfect at home in the Big Ten for the second-straight year and only the second time in the last five years.

Dancer gave each of the four seniors a special frosted cookie cake. Ross Guignon asked if the cookies were meant to be eaten between doubles and singles play.

Each senior had a special introduction to the crowd, Guignon’s got the most laughs, mentioning the Twitter account dedicated to his fans, @RossGuignonFans.

The Net Nuts brought handheld cutouts of each senior’s head for their fans. There will be no Senior Day for the Illini in two years, as there are no sophomores on the team’s current roster. There were no seniors last season either.