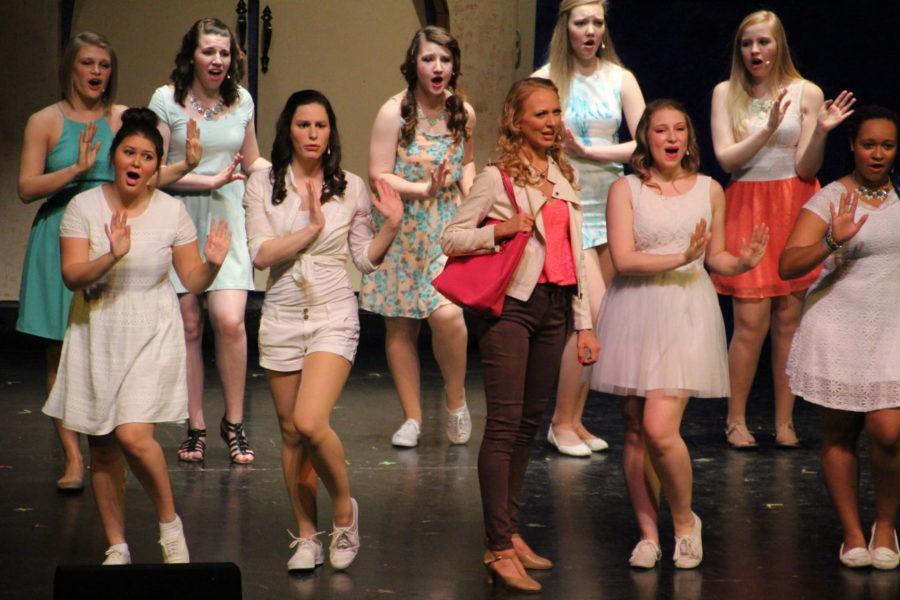 Elle Woods played by Noël Konken, senior in ACES, sings the musical number What You Want at Legally Blonde the Musical on Sunday, April 12, 2015.

The cast of “Legally Blonde” earned a standing ovation on Saturday night, when they finished their Moms Weekend performance sponsored by the Illini Union Board.

The IUB put on the play inspired by the 2001 movie of the same name starring Reese Witherspoon, who played a sorority girl who follows her ex-boyfriend to Harvard Law and finds herself along the way.

Tickets were sold out Saturday night, and Lincoln Hall Theater was packed with students and their Moms.

The musical followed the original movie to a T, and it had many comical moments along with an uplifting plot.

The performance started with the actors and actresses running down the aisles to a pink-lit stage. The opening song, “Omigod You Guys,” captured the audience’s attention and gave them a taste of what the tone of the musical would be.

At the end of the song, Elle Woods, played by Noel Konken, senior in ACES, made her grand entrance. She was rolled onto the stage while contemplating the outfit that she was going to wear for her boyfriend’s anticipated proposal. The audience cheered after the opening act and continued to be excited and entertained by the actors.

When Elle’s boyfriend Warner, played by Cody Jacobs, freshman in FAA, broke up with her during the second song, the audience laughed when Warner asked Elle for her hand, and she quickly switched from her right to left, as she was not expecting to be dumped. Elle was heartbroken when Warner ended their relationship and she then decided to start her journey to become a Harvard law student.

Konken kept the audience laughing throughout the entirety of the play, as well as providing impressive vocal and theatrical dance. Konken fit the part of Elle perfectly and did an amazing job of getting in character and preparing for her role.

The number “Whipped Into Shape” was also impressive, as Andrea Goethals, sophomore in Media, jumped rope while singing, as she portrayed the convicted Brooke Wyndam.

Another act that the audience seemed to enjoy was during the song “Gay or European,” when the lawyers debated whether or not the man claiming to be Brooke’s ex-love interest was gay, or simply European. The audience laughed many times throughout the song and the actors got a loud round of applause after the number was finished. Nikos, played by Vicente Aguirre, who is currently studying abroad from Chile, provided some of the quirkiest moments of the play during the musical number.

Paulette Bonafonte, played by Sarah Rabin, sophomore in FAA, also played one of the best roles in the play and was an audience favorite since she backed up her impressive vocals with humor. Her love interest, the UPS guy, played by Mark Weidner, junior in Media, was also enjoyed by the audience and got a rise out of them with his bend and snap.

The audience seemed to enjoy the musical and continued to provide laughter and enjoyment throughout. It was impossible to not smile at the jokes and the effort of the performers shined through.

The musical provided a fun, free-spirited activity for students and their moms and was a cute option for something to do with family.