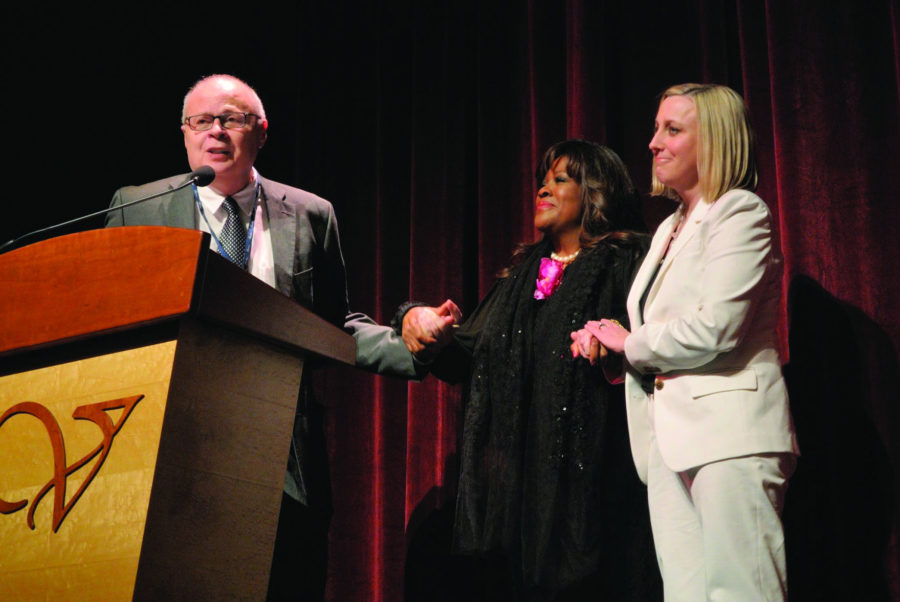 Fourteen years ago, Mary Susan Britt responded to an ad in the paper to work for the University of Illinois’ College of Media. Her family had just moved to Champaign-Urbana from Vicksburg, Mississippi, and she thought she’d try her luck with a new job in a new town.

She couldn’t have predicted that this job, director for advancement in the College of Media and associate festival director for Ebertfest, would mold her career, connect her with people in diverse walks of life and create great memories.

“She very quickly became indispensable to the organization and the running of the festival,” said Nate Kohn, director of Ebertfest.

With the festival in its 17th year, however, it will be her last in this position. She and her family will be moving to Louisiana this summer and reconnecting with the South.

“The warm weather is something that we’ll welcome,” Britt joked. “As far as what I’ll be doing, I’m not sure, but I’m sure it’ll be something wonderful.”

This will be a new experience for Britt, because she has been the powerhouse of Ebertfest for so long, planning and carefully organizing every detail year-round in preparation for the festival.

“She just handles it all,” said Jan Slater, dean of the College of Media. “I can’t imagine another one person doing all that Mary Susan does.”

Britt’s annual Ebertfest schedule begins in the summer, where she calls the festival sponsors, puts together the sponsorship package and works on the beginning phases of the following Ebertfest. Next come newspaper ads, media connections and pass sales in November before the home stretch in January.

Despite her persistently busy schedule, Slater said she keeps an upbeat attitude and a contagiously positive air.

“She’s a force… nothing fazes her,” Slater said. “No matter whether she might have one thing or a hundred things on her mind, when she’s talking to you about her daughter or her job or Roger Ebert, she’s completely focused on you … I think one of her greatest strengths is she listens to people.”

In addition to her day-to-day and month-to-month tasks, she also keeps track of individuals who attend Ebertfest, especially those who return every year.

“She has an incredible memory,” Slater said. “She not only knows (the festival visitor’s) name, she knows who they are, where they’re from, what they do for Ebertfest, how long they’ve been involved in Ebertfest… she knows the whole story.”

“She comes from the South and has a bit of a southern accent,” Kohn continued, “Which seems to work wonders in Illinois when it comes to talking about the festival.”

This southern charm extends into her conversations about the festival, her job, her family or her coworkers.

“I think it’s hard not to have a personal relationship with Mary Susan,” said Slater, who has known Britt since 2007. “She makes everybody feel very special because she always gives them the time.”

In Britt’s case, time is something she has very little of. She breaks up her time between planning Ebertfest and working with the College of Media, where she works more with students and alumni.

“The relationships I’ve made and the friends I’ve made are unbelievable,” Britt said. “We’ve lived here for so long; we have a lot of connections, and I’m sure we’ll be back from time to time.”

She is especially passionate about keeping Roger Ebert’s legacy alive each April.

“There are so many things I enjoy about the festival; it’s going to be impossible for me to say everything,” said Britt. “Having had the opportunity to work with Roger Ebert has been the experience of a lifetime. But just how wonderful this community is, and how the community really does get behind the festival … they believe in what we’re doing and what Roger started in 1999.”

Every year is deemed “the best festival ever” by the time it is complete, she laughed, because each is so unique.

Ultimately, while Britt is excited for the next phase in her life and her family’s life, she will be missed through the personal networks she has created here.