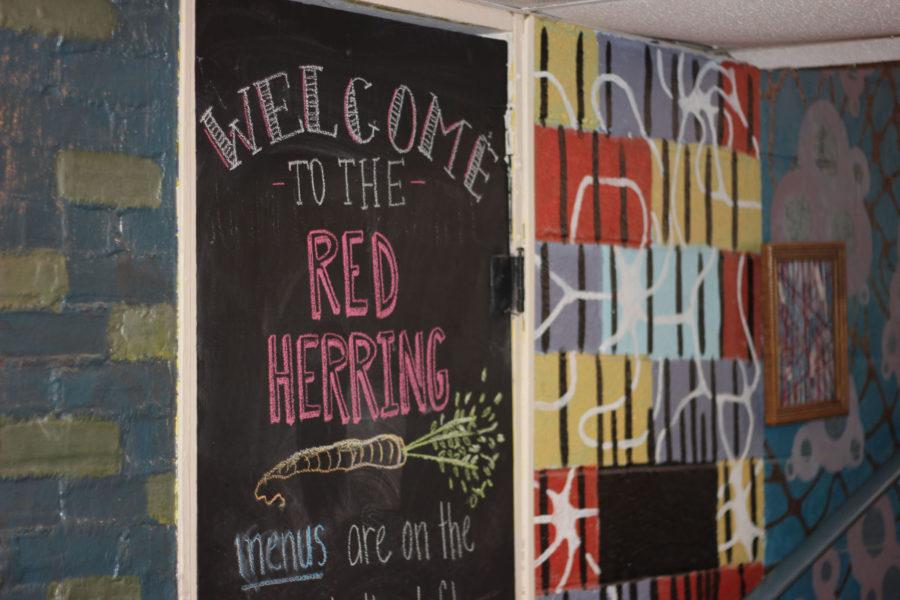 On a warm April evening, Durl and Jan Kruse relaxed with their friends after they finished a Japanese-fusion meal at the Red Herring, Urbana’s first all-vegan restaurant. Jan showed off two loyalty cards covered in little red herring-shaped stamps.

“I’m saving this one for a friend,” she said.

Durl and Jan are regulars; they’ve been coming to the Red Herring’s Wednesday “Vegan Fusion” nights for the past 10 years. They say they love the friendly atmosphere of the restaurant, as well as the variety of food.

Customers are greeted by the sound of ambient music playing in the background and pots and pans being used in the kitchen, where workers talk and laugh with each other.

“The young folks in the kitchen are so thoughtful,” Jan said. “They’re consistent in coming up with creative ideas for the menu.”

The diners, including Durl and Jan, frequently stay long after their meals are finished. They sip what’s left of their drinks and fill the room with chatter, making a friendly and inviting environment, one that head chef Holly Curia said keeps customers coming back for more.

“We get people every day that come in wide-eyed looking around, and it’s super obvious they’ve never been here before,” she said. “But last Thursday, we had someone give us a call and say, ‘I haven’t been to the Red Herring in 45 years, do you guys have a parking lot these days?’”

For over 30 years, the Red Herring has been running in cooperation with the Channing Murray Foundation, a Unitarian-Universalist organization that sought to further its interest in activism through the restaurant.

“We moved from a coffeehouse to a restaurant gradually from the ‘60s, when a great deal of social activism was done at the Herring,” Silver said.

The restaurant is unique because it is non-profit, meaning all money made goes to pursue environmental and social justice missions, according to Curia. This also includes supporting projects such as immigration reform and racial and LGBTQ justice.

The Red Herring’s 10 employees — including two students and many graduates of the University — further this mission through their work.

“Most people working here are pretty passionate,” Curia said. “This is what they’re doing to make a living.”

The staff is responsible for completing a variety of tasks for the restaurant, whether that be waiting tables, cooking, working the register or even coming up with ideas for menus and specials.

“It’s your responsibility if you’re working the opening shift, then you’re also the person in creative control of the bakery that day,” Curia said.

The restaurant is open for breakfast and lunch on weekdays from 9 a.m. to 2:30 p.m., as well as for “Vegan Fusion” nights on Wednesdays from 5 to 8 p.m. Breakfast and lunch have set menus with added specials every day, while their “Vegan Fusion” nights have a different cultural theme every week, which could be anything from Indian to Ethiopian food and everything in between.

“We want to be able to appeal to everybody,” Curia said. “It’s fun to dabble in parts of the world.”

Curia said both the employees, as well as the customers, are excited about the restaurant for its environmentally friendly business approach, as well as the idea of a healthier lifestyle.

“We’re all excited about what we do here: providing a vegan restaurant for the town,” she said.

The Red Herring became an all-vegan restaurant after they redesigned their menu in 2013. They cooperate with local farms to provide fresh produce that also determines their menus. Over the years, they’ve been able to build strong relationships with farms and greenhouses, which provide them a variety of locally-grown fruits and vegetables.

“They tell us their harvest, and we take it in,” Curia said. “That’s what’s pretty unique and special about the whole process. We’re inspired by what the farmers have; we’re not asking the farmers to deliver what we want.”

But this process can be challenging since they only go off of the seasonal items that the local farmers offer.

“It can get difficult; how many ways can you make squash?” Curia said. “But at the same time, we want to be supporting that it’s local and abundant. It creates a need for us to be doing recipe research … and it forces us to keep learning.”

For customers like Durl and Jan, the fact that the food is locally-grown and fresh is an added benefit to the restaurant that they’ve been loyal to for over a decade.

It’s the type of response Curia is used to hearing her customers have.

“Most often, the response is people love it, and they want to come back because it’s a pretty fun environment,” she said.