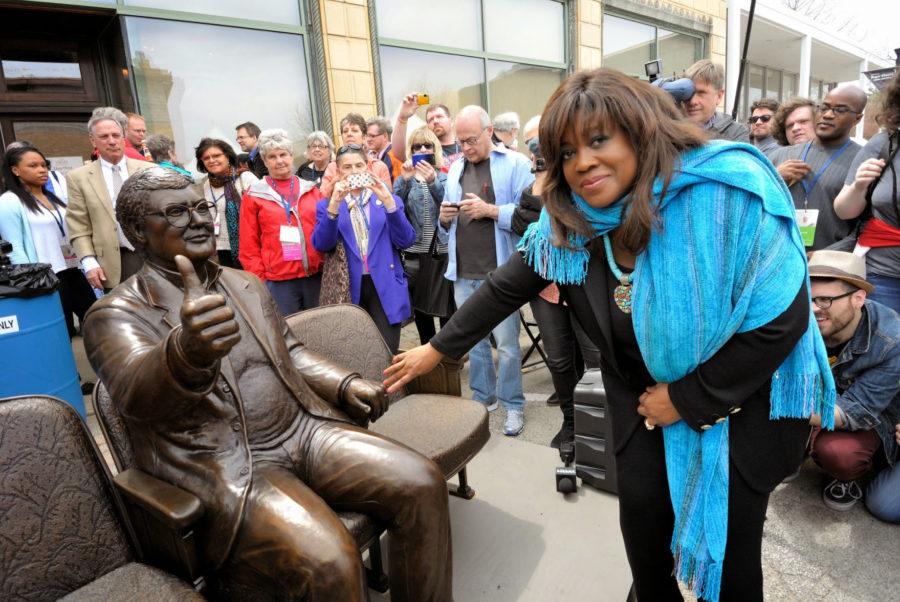 Chaz Ebert touches the hand of the statue of Roger Ebert that was unveiled at Ebertfest last year.

When Roger Ebert considered potential films to show at Ebertfest, there was one person in particular who he loved to discuss movies with: his wife, his supporter and his closest friend Chaz.

We spoke with Chaz via email and asked her a few questions about her connection to the Champaign-Urbana community, how the film festival has carried on without the man who started it all and what she believes her husband’s legacy is.

Chaz Ebert: Urbana was my husband’s hometown, and so of course I feel a connection to the twin-towns of Urbana-Champaign. In the beginning, it was more a curiosity in wanting to know more about Roger’s background and the influences that shaped him as a person growing up there. But over the years as we visited his relatives there and attended his high school and college reunions, and maintained contact with the University, my relationship to the towns grew.

But the connection really deepened when we started Ebertfest (originally called Roger Ebert’s Overlooked Film Festival) there 17 years ago. And now with a sculpture of Roger in front of the Virginia Theatre, it just feels like a home away from home when I go there. That is why I am so happy we will be establishing The Ebert Center in the College of Media at the University. Roger says that his values were instilled in him by his parents and the nuns in his grade school, and that the University gave him a window to the rest of the world. He was always so grateful for his start.

DI: Whose decision was it to continue the festival, and how do you feel about it?

CE: There was never any real talk about not having the film festival. It just didn’t occur to us that it shouldn’t take place. Roger and I had worked with Nate Kohn and Mary Susan Britt and Dean Jan Slater, and so many others on the festival for so long, that we all just assumed it would continue. In fact, Roger was actually making plans to attend the festival in 2013 before he passed away on April 4. But when I think back on it, he was also making plans if he could not make the trip. And it was only after we looked at the totality of the program that year that we realized he knew he wouldn’t be there. The program contained several films about loss and love and legacy and continuing on in the face of loss. I was stunned when I realized this.

DI: Can you describe the support from fans and sponsors of the festival?

CE: The festival differs from other festivals because it exists purely for the pleasure of experiencing good films in the communal atmosphere of other film lovers in a gorgeous renovated movie palace. We don’t conduct business or have competitive prizes or audition people for their next roles. We try to maintain a warm and welcoming environment for our filmmakers and audiences, and it has become one of the friendliest festivals around. I am proud to say that most of the sponsors and attendees have been coming almost from the beginning, and I am truly grateful for that.

DI: How has the festival changed (both while Mr. Ebert was alive and after his passing)? How do you keep his spirit and presence alive?

CE: While we plan to keep up with the times, I like the fact that you can still feel Roger’s spirit here. We were so close and we respected each other’s opinions. But Roger also respected what Nate and I had to say about the films and the guests, and he trusted us to keep things going. My routine with Roger when we were going home would be to talk about films we wanted at the festival, and so I have a list of films that I will be excited to present in future years. One of those films is Jodorowsky’s “Santa Sangre.” But I am hoping we can do it when Jodorowsky is able to come with the film. I am so sad that Roger didn’t get to welcome Terrence Malick to the festival, but I am hoping we will be able to do that one day. Anyone who has attended this festival knows what a testament it is to the values Roger espoused. He said that movies are a giant machine that generate empathy. He and I were big on things like kindness and compassion. It is those things as much as his movie reviews that I consider his legacy. And while I am no Roger Ebert, I will try to do my best to continue in that tradition.