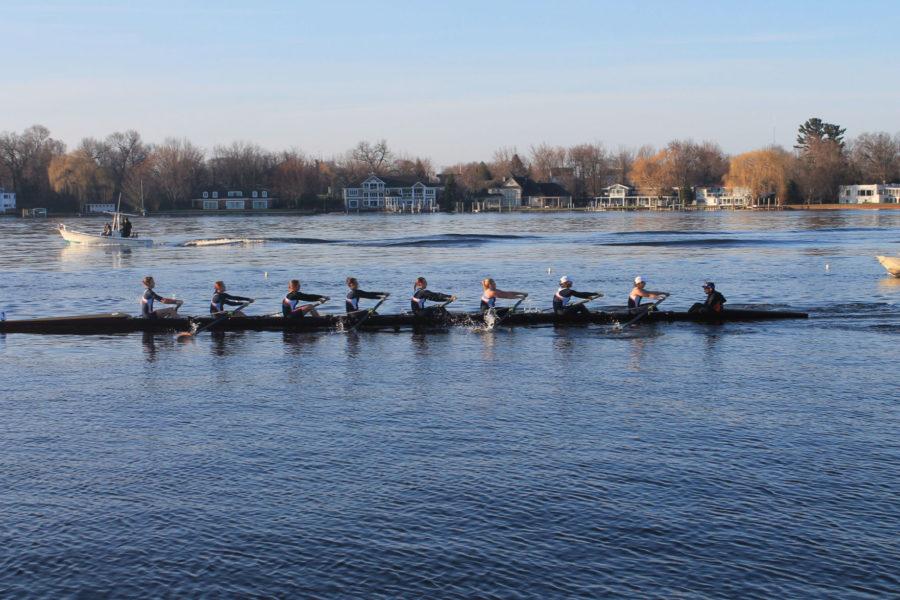 The Illinois women's rowing team compete in the Lubbers Cup in Michigan.

The Illinois women’s rowing team wrapped up its regular season this past weekend with the women’s Varsity 8+ boat finishing last out of seven teams and the Novice 8+ boat placing third out of six teams at Don Lubber’s Cup.

“We got a lot of racing experience,” senior club president Meridith Kisting said. “We got to go up against boats we’ll see later in the season, and it was a very encouraging race because we went up against some of the best clubs in the country.”

The Illini faced two teams at the meet in Grand Rapids, Michigan, that they will face two more times this season. Illinois will face Purdue and Grand Valley State at the MACRA Championships and the ACRA Nationals in April and May, respectively.

“It’s a great chance to see where we were compared to these crews this past weekend and seeing how we compare later and gauge our progress against theirs,” Kisting said.

The Illini have two more races prior to a month of training before the ACRA Nationals in Gainesville, Georgia. To prepare for these regattas, the team will have higher-intensity workouts during practice over the next few weeks as opposed to a more aerobic workout. The higher intensity practices are intended to “simulate what it’s going to be like rowing in the middle of the race,” Kisting said.

Toward the end of the semester, and as Nationals get closer, the team will practice two times a day and make trips out to Clinton Lake in DeWitt, Illinois, to gain more experience in more exposed conditions. Homer Lake, in Ogden, Illinois, where the team usually practices, is relatively sheltered and does not allow the team to practice with high winds or choppy waters too often.

This weekend, the team prepares to host 12 teams for the Third Annual Illinois Collegiate Rowing Invite at Clinton Lake. At the event, the teams will compete for men’s and women’s points championships, with men’s and women’s events scored equally. The Illinois school (five of the 12 teams are from Illinois) that finishes with the highest point total will be crowned Illinois State Champion.