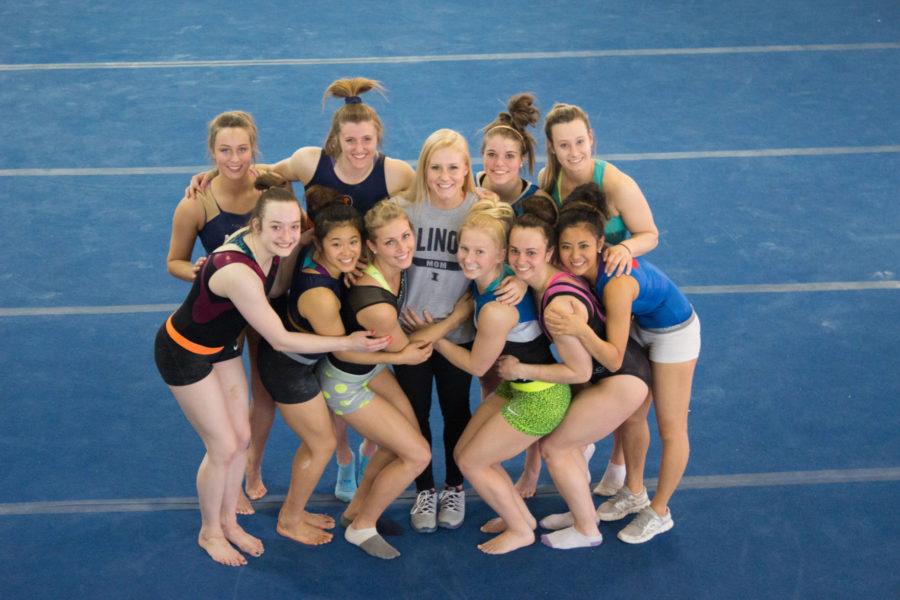 Senior Gymnast Jordan Naleway, the “mom” of the women’s gymnastic team, is hugged by her teammates to celebrate her final year in team.

Jordan Naleway earned her first varsity letter — commemorating her first collegiate season — at the 2012 Illinois gymnastics awards banquet. But that night, Naleway was also deemed the next “mom” of the women’s gymnastics team.

Then-senior Hannah Welker had a gray “Illinois Mom” t-shirt and was to give it to whoever she felt would be the next “mom” of the team. To no one’s surprise, Naleway ended up receiving the shirt.

Naleway, who recently completed her senior season, has lived up to the “mom” label placed upon her three years ago.

In the senior night program for Illinois’ meet against Oklahoma on Feb. 27, senior Sunny Kato said, “Jo will be remembered as the mama hen on this team. She loves her baby chicks with everything she has and will go through hoops to protect each and every one of us.”

“Everybody kind of jokes with me about that,” Naleway said. “But one of the things that I pride myself on is caring about the other girls more than I care about myself. I want to make sure that I’m there to help them get through whatever they need to get through.”

Despite the jokes, the gymnasts appreciate Naleway and her “mom” role. In one season, freshman Jordyn Givens has received a taste of what it’s like to have Naleway as a motherly figure.

Whenever Givens is worried — whether it’s something about school, gymnastics or life in general — she knows she can text Naleway about anything and get advice.

“Instead of just giving me a small answer like, ‘Oh, it’ll be fine. Just do this,’ she’s always super descriptive, is always straight to the point, lets me know how to handle it and what I need to do,” Givens said. “It’s one of those things where she’ll reply to my text, and if I don’t reply again, she’ll be like, ‘Hey, did you get everything figured out?’ or ‘Hey, is everything OK?’ So she’s just literally always there no matter what the situation is.”

Naleway credits the team atmosphere of college gymnastics as one reason she fit into the role. Prior to college, Naleway’s gymnastics mostly concerned only herself. While one represents their home gym in club gymnastics, the gymnast typically competes as an individual, but Naleway experienced the team atmosphere a bit before college.

During her club gymnastics days, Naleway always looked forward to the weekend of Junior Olympic Nationals. As a member of Region 5 — gymnasts competing for a gym in Illinois, Indiana, Kentucky, Michigan or Ohio — she had the opportunity to room with other girls in her age group — something other Regions weren’t always able to do.

“It was just a team atmosphere the whole weekend, and it was my favorite weekend every single year,” Naleway said. “I was like, ‘If that’s what college gymnastics is like — it’s all about the team, and you get to hang out with your friends the whole time — then I’m going to love it.”

The thing about Naleway, however, is she initially had no interest in pursuing college gymnastics.

It wasn’t until Naleway was in seventh grade that she started to consider college gymnastics. At that time, Laura Woolf, a former Illinois gymnast and someone Naleway trained with as a child, finished her collegiate career and had nothing but good things to say about college gymnastics.

When it was time to choose a college, Naleway was deciding between Illinois and University of Washington. Now that her career has come to an end, she has no regrets about her decision.

“I can’t imagine ever having such a wonderful experience at any other school,” Naleway said.

Head coach Kim Landrus, in particular, feels fortunate to have Naleway as an athlete. Landrus called her “one of the most respectful athletes that (she has) ever coached” and an athlete who never stops growing.

Naleway went from competing on the uneven bars four times in her freshman season to maintaining a spot in the bars, balance beam and floor lineups for all 13 meets this season.

She was also a contributing factor to the only two 197-scores in program history and competed for Illinois at NCAA Championships in 2013 and 2014.

This season, Naleway won’t have the chance to compete at Nationals one last time — the Illini’s third-place finish at Regionals on April 4 wasn’t enough to earn a Nationals berth — so her gymnastics career has ended.

“I’m not ready for it to be done,” Naleway said. “It’s just something that I’m going to have to get used to I guess.”

It’s also something Illinois will have to get used to.

The Illini are losing a consistent gymnast, for Naleway never fell during any of her routines throughout four seasons at Illinois.

They’re also losing a leader and role model — someone who, when it’s a bad day in the gym, will “always go over and encourage you,” as sophomore Mary Jane Horth put it.

“I don’t know who I’m going to give it to this year,” Naleway said of her “Illinois Mom” t-shirt. “Somebody has to fill the role when I’m gone.”