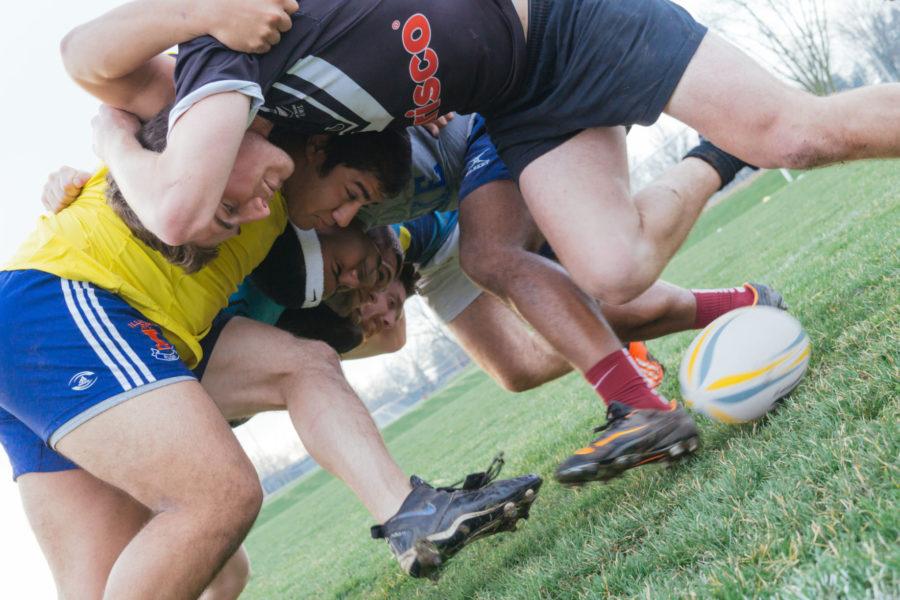 John Huguelet practices with other rugby players for the Big Ten weekend in Iowa at the Florida and Lincoln Playing Field on April 7.

Rich Daniels is a man of many passions. The sophomore is majoring in music performance with a pre-law track and is the president of the Illinois Men’s Rugby team.

“Music is less competitive, and at the same time, you need the same dedication and work ethic in both music and rugby to succeed,” he said.

But it takes sacrifice to balance the time commitment that comes with being involved in so many activities.

Daniels said if he has rehearsal on a Saturday, he might have to miss a tournament, and a performance gig during the week could make him late to practice.

In the far future, he may make a career out of law or music. Daniels said he would like to be a professional musician or educator, but isn’t sure what he would like to do with a law degree.

In the near future, Daniels is focused on the team’s performance in the championship tournament that Illinois will host on Saturday. The team is ranked first in the Big Ten, and they will be the No. 1 seed going into the tournament.

“For this weekend we’re focusing more on the fundamentals of the game to make sure we don’t make that many mistakes on Saturday,” Daniels said. “Everyone’s got the talent; Everyone’s got the size and the heart. It just comes down to who makes fewer mistakes.”

Sacrificing for the team

For John Huguelet, team is the name of the game in rugby.

“That’s the thing about this game. It’s like everybody has to do the same thing,” Huguelet said, “Everyone has the same responsibilities, and that’s part of the reason why it’s such a great team sport.”

Huguelet described rugby as a game of sacrifice, noting that it’s more honorable to give a good pass and get tackled and let a teammate score than to try to score himself.

“It’s kind of about being a part of the team and sacrificing your body physically for your teammates,” Huguelet said.

The fifth-year senior is an environmental sustainability major and said he got into the sport because both his father and brother played. Huguelet played three years in high school and had aspirations of playing college rugby.

“I just knew I was going to play rugby wherever I went,” he said.

Rugby as a cultural connection

Joe Bird, an aerospace engineering major, has one month left on the Illinois Men’s Rugby team.

He is a junior studying abroad at Illinois this year and will return home to Burton upon Trent, United Kingdom, this June.

“I was quite surprised this place actually had a rugby team,” Bird said.

A rugby player of 10 years, Bird said some aspects of the sport differ in the United States from the United Kingdom.

“Everyone here has obviously come from (American football), so you have taken athletes from football and put them into rugby where in England everyone is growing up playing the sport, so you’ve got people with better skills, whereas everyone here is quicker and stronger.”

Bird said playing in the United States gave him a completely different perspective on rugby that he can take back to England.

Despite the differences, Bird said the social aspects of being on a rugby team are the same.

“What’s really similar about rugby here and rugby in England is that it’s both very social,” he said. “You’ll spend a lot of time with players outside the pitch.”

With a smile and a laugh, Bird said he has been able to get to know the team very well and has made many friends during his time here.

While he doesn’t want to think about leaving just yet, he said he intends to come back and visit the U.S.