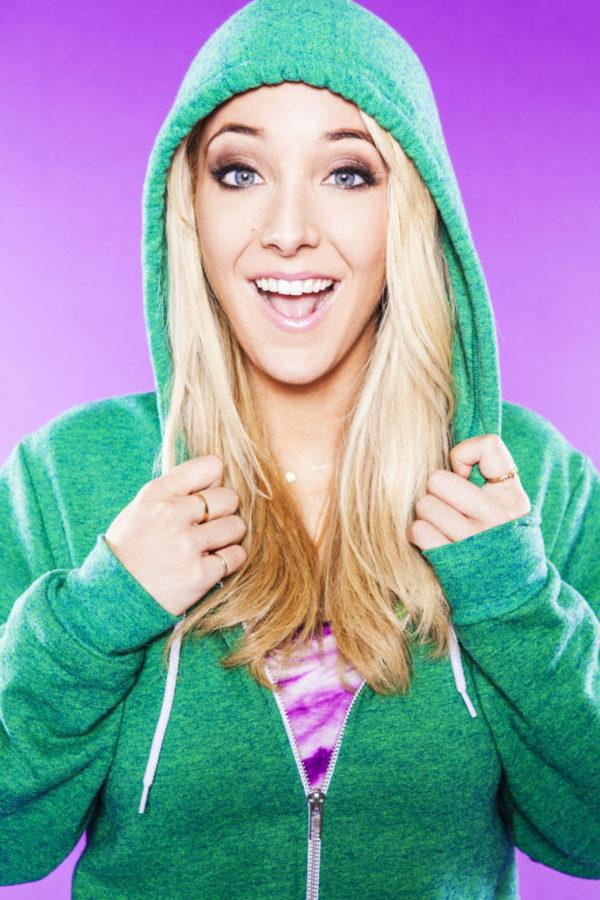 Marbles has built an online empire based on YouTube videos, Instagram posts, blog and vlog posts, and most recently, a podcast.

Thursday night, she will break out of the Internet and come to campus for a free Illini Union Board-sponsored lecture at 7 p.m. in the Illini Union I-Rooms.

Students at the University are excited to see the face behind the “magical YouTube videos.”

“I find Jenna’s videos hilarious, and I can always count on them for a good laugh,” said Jackie Zhou, junior in LAS. “It’s always exciting to meet someone you admire, especially after being in the (YouTube) community for years.”

Just like Marbles’ personality, this lecture will be a bit unconventional. Instead of a typical speech or presentation, this event will run more like a talk show.

Since April 5, the Illini Union Board invited students to use the tag #AskJennaUIUC to post their own questions on social media, including Twitter and a Facebook page for the event.

Mefah Joyner, junior in Media and Illini Union Board director of enriching programs, will ask Marbles questions based on students’ online suggestions.

“I keep telling people that I’m essentially going to play Oprah with her,” Joyner joked.

She said the board prepared to bring Marbles to campus in a short time frame, just within the past month. Members of the Illini Union Board laid out a slate of potential lecturers last semester that would be of interest to the student body, of which Marbles made the cut for April.

“The reason I’ve always connected with Jenna Marbles’ videos is because she’s so proudly and unapologetically herself, and people love her for it,” said Victoria Hendzel, junior in Media.

As of Tuesday, the Facebook event page for Marbles’ Thursday lecture has reached as far as Austin, Texas, (albeit partially by mistake) to garner over 4,300 RSVPs. Joyner estimates an attendance of roughly 1,000 to 1,500 people, depending on how many will fit in the lecture space.

“We’re (having the lecture) in the Union I-Rooms and opening up some of our other lounges,” Joyner said. “It’s one of the biggest accommodations on campus, so … we’re trying to make it fair, but whatever happens, happens.”

Joyner herself is a fan of Marbles’ eccentric videos.

“(I like) the fact that she is able to use her own genuine personality to grow … and take her own voice and make it comedic,” she said.

Marbles rose to fame with her most popular video “How to trick people into thinking you’re good looking,” which was uploaded to YouTube in 2010. It featured her caking on makeup and transforming her hair to an entirely different look. The satirical two-and-a-half minute video has more than 61 million views.

Other classic Jenna Marbles videos include “How to avoid talking to people you don’t want to talk to,” “What girls do in the car,” and “Drunk makeup tutorial.”

As of this week, the Jenna Marbles’ YouTube channel has over one billion views and nearly 15 million subscribers, making her “the most-subscribed-to female personality on YouTube,” according to a Reason.com article.

Ipek Firat, sophomore in Business, has been watching Marbles’ videos for about four years, and she continues to be an avid fan of Marbles’ quirky humor.

“I’ve always felt like YouTubers get a lot of hateful comments from random people,” Firat said. “It’s really impressive how she didn’t give up because of that and got where she is today.”

In fact, earlier this year, Marbles posted a video called “Reading Mean Comments,” where she did just that in a similar format to Jimmy Kimmel’s series, “Celebrities Read Mean Tweets.”

Her video received an outpouring of positive support from concerned fans, so much so that she was prompted to write a more in-depth blog post about the subject.

“I have no idea what I’m going to do next,” she said in a New York Times video from 2013. “I really like when people say that I made them laugh today, so I think next I’m going to continue making people feel a little less weird, maybe a little more normal and brightening their days on the Internet.”