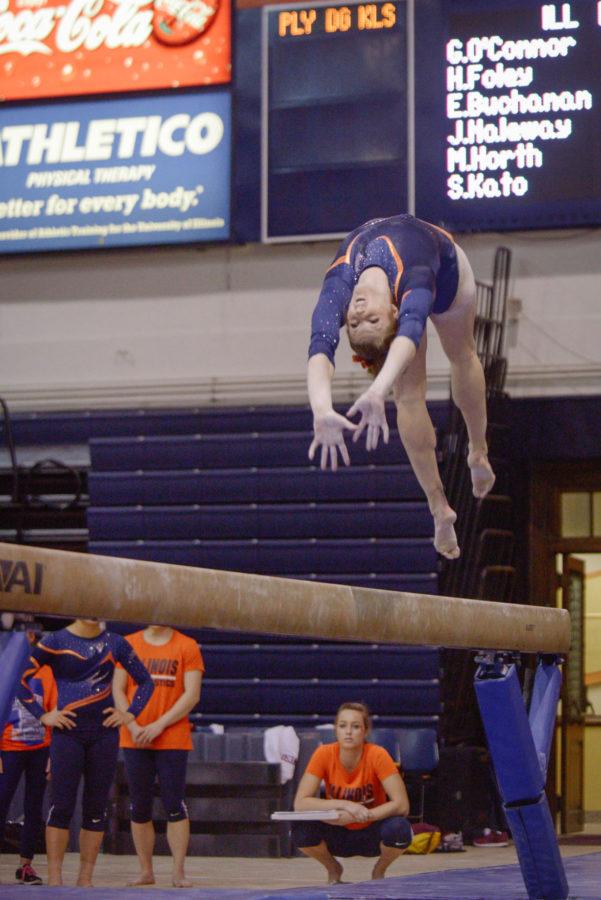 Illinois’ Mary Jane Horth performs a routine on the balance beam during the meet against Minnesota at Huff Hall on February 7. The Illini won 195.775-195.375.

The Illinois women’s gymnastics team won’t be competing at the NCAA Championships for the first time in three years, but three of its gymnasts will.

Head coach Kim Landrus wanted her team to qualify but knows having three of her gymnasts advance as individuals — more than any other program that did not advance as a team — is exciting.

“For them to have the opportunity to go to nationals and represent us really speaks volumes about how far they’ve come all season long and how hard they’ve worked,” Landrus said.

The championships will be held from Friday to Sunday at the Fort Worth Convention Center in Fort Worth, Texas. Sophomore Mary Jane Horth and junior Giana O’Connor will compete in the all-around. They earned their berths for being the top two all-around finishers who did not advance with a team at April 4’s Morgantown Regional. Senior Sunny Kato will compete on the uneven bars, and was named the co-champion on uneven bars at regionals with Florida’s Bridget Sloan.

All three gymnasts mentioned their desire to compete as a team, but said they’re happy knowing they’ll have familiar faces around. What differs, though, are their paths to nationals.

Horth, ranked No. 14 nationally in the all-around, will complete her first season as an all-around competitor at the NCAA Championships. This season also marks her first full season as a collegiate gymnast.

She didn’t compete last season until Feb. 21 due to recovering from a torn left Achilles. Horth is one of three all-arounders on the team and has maintained that position throughout the season.

“Coming in freshman year, I had no idea what was going to happen for my four years here,” Horth said. “I’ve heard so many stories about people tearing their Achilles and not coming back so successfully, so I really had no idea what was in store. I’m just happy that I could come back, and with the support of my coaches and my teammates, have such a great year and be able to contribute and help my team.”

Horth said she is excited to represent her team, but has no specific goals.

“It’s the last meet of the season no matter what, so there’s nothing to be left behind,” Horth said. “I just want to go out there and do what I do every day in the gym and do my best, and whatever that is, however that turns out to be result-wise, it is what it is.”

O’Connor, the No. 12-ranked all-arounder nationally, has competed in the all-around since she arrived at Illinois in 2012. This has been her best season competing in the all-around. She tied the second-best all-around score in program history (39.600) on Feb. 14 against Iowa and said that performance boosted her confidence.

On March 1, O’Connor led Illinois to a second-place finish at the Masters Classic by tying the top all-around record in Illinois history (39.625). This year she was named a First Team All-Big Ten selection and a Second Team All-American in the all-around.

“I was hoping I would have a season like this,” O’Connor said. “But I was not expecting it — especially after the first couple of meets where I was in a little rut with my beam (acrobatics) — so I definitely did not expect to have such a breakout season like I did.”

Kato would be ending her collegiate gymnastics career this season if it weren’t for an ACL tear in 2011 — her freshman year.

She officially began her Illinois gymnastics career her sophomore season, and averaged a 9.663 on bars and a 9.796 on beam. Her highest score in both events was 9.900, but inconsistency hurt her averages.

This season, Kato achieved career high scores on bars and beam — both 9.950 — and credited her growth to a stronger mentality.

“I’ve become really confident with myself,” Kato said. “And knowing that my team was also growing with me, I think that also helped to realize that I’m not only just a great gymnast in the gym, but I can also perform.”

Kato hopes to make it to event finals and be named an All-American.