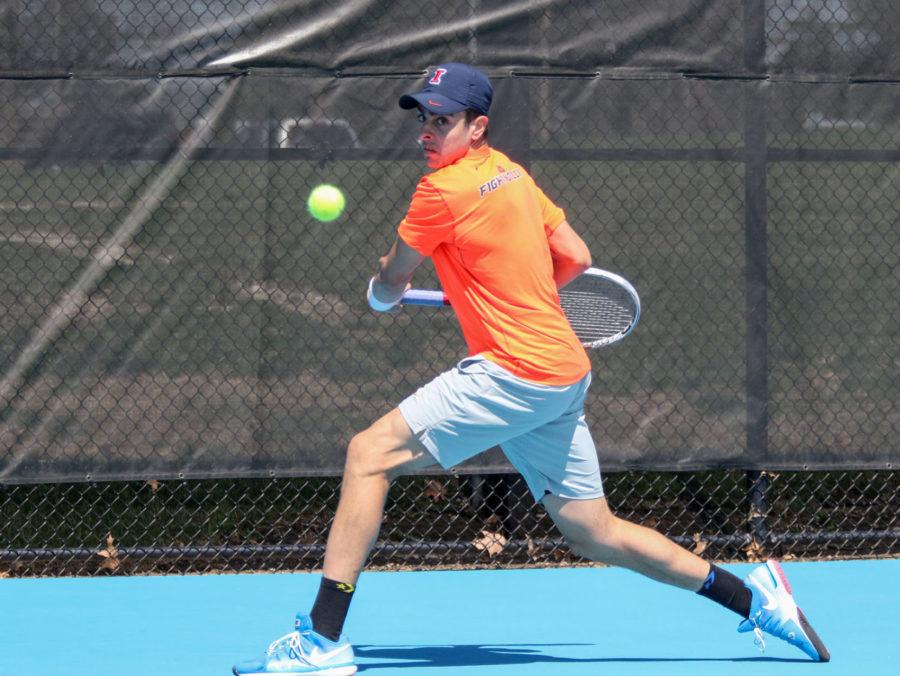 While the Illinois men’s tennis team clinched a share of the Big Ten title on Sunday, there was a cloud over the weekend road trip as the Illini’s perfect Big Ten season came to an end. On Friday, the team suffered its first conference loss of the year, dropping a 4-3 decision to Minnesota. On Sunday, a 4-0 win over Wisconsin secured the team a piece of the Big Ten regular season title, but it was little comfort for head coach Brad Dancer.

“We’re still just not anywhere near where we need to be,” Dancer said. “I think we all got (the loss) sitting in our bellies still … Our pride is wounded right now.”

Friday night also ended a seven-match doubles-point winning streak. No. 47 Jack Hamburg and Mathieu Froment of Minnesota took down No. 60 junior Jared Hiltzik and senior Tim Kopinski on court one, 8-4, and freshman Aron Hiltzik and senior Ross Guignon lost a tiebreaker to Minnesota’s Felix Corwin and Leandro Toledo, 8-7 (3). The last time Illinois dropped the doubles point was on March 16 at Texas Christian University, its last loss of the season.

Illinois last traveled to Minnesota in 2013, when the Golden Gophers handed the team its first conference loss of the year. Friday night played out the same way. It’s only the third time that the Illini have lost to Minnesota under Dancer.

“They came out with a lot of energy and came at us,” Kopisnki said. “We played it a little bit too safe maybe (in doubles).”

It was back and forth in singles. Minnesota struck first as Hamburg took down No. 57 Aleks Vukic 6-4, 6-4. The loss was Vukic’s second of the spring. Fellow freshman No. 64 Aron Hiltzik picked up a win on court four and Farris Gosea took down the two-time reigning Big Ten Men’s Tennis Athlete of the Week No. 21 Leandro Toledo, 6-4, 6-4 on court one to tie things up. Kopinski gave the Illini the lead with a defeat of Reuben Weber, 4-6, 6-1, 6-2.

It wouldn’t last long though. No. 94 Matic Spen of Minnesota upset No. 23 Jared Hiltzik on court two, 3-6, 7-6 (4), 6-2. The match came down to court six, where senior Blake Bazarnik, who clinched last weekend’s senior day match against Nebraska, fell in a hard-fought match to the Gophers’ Mathieu Froment. Bazarnik was defeated in a third-set tiebreaker, losing 6-3, 4-6, 6-7 (2).

“We have to play significantly more emphatic doubles,” Dancer said. “And then we just have to stay cool and trust ourselves in the singles court.”

The Illini took care of business on Sunday at Wisconsin, sweeping the Badgers 4-0. The doubles pairs returned to good form – the team of Kopinski and Hiltzik and the team of Gosea and Vukic both picked up wins. In singles, Bazarnik, Vukic and Kopinski secured the sweep and the share of the Big Ten regular-season title.

The challenge now for the Illini is to put the loss behind them as they prepare to host the Big Ten Championships this weekend at the Atkins Tennis Center.

Kopinski said that while Friday’s loss lingered into Sunday’s match, the team knows it can show its mettle at Big Tens.

Dancer gave some positive spin on the loss to the Gophers.

“The most dangerous animal is a wounded bear,” Dancer said. “And so we better come out as if we’re a wounded bear for the rest of this year.”